One person has been confirmed killed and three are unaccounted for after a large portion of a hotel under construction in New Orleans suddenly collapsed.

News outlets report construction workers had to run to safety as the Hard Rock Hotel, which was under construction, came crashing down. Upper floors began to fall on top of each other before one side of the building fell to the ground below.

Nearby buildings were evacuated and officials said the building and an 82-metre construction crane still looming over the site were considered unstable. It was not immediately clear how that would affect search and rescue efforts. A drone was flown over the site to help authorities assess the situation.

WWL-TV aired and tweeted a viewer's dramatic video of the collapse, prior to news of the fatality.

Evacuees included guests at a hostel across the street from the damaged building.

"I heard a huge noise and thought it was a plane crashing. Then, the hostel shook," guest Sue Hurley, 68, told The Associated Press. She said she was reminded of news accounts of the 9/11 terrorist attacks.

Another hostel guest, Michael Arbeiter, 30, from Munich, Germany, said he was just getting out of the shower when the room shook.

"I'm not sure what happened but they told us to get out of here," he said. "I'm supposed to stay until Monday. Thank God it was not another 9/11." 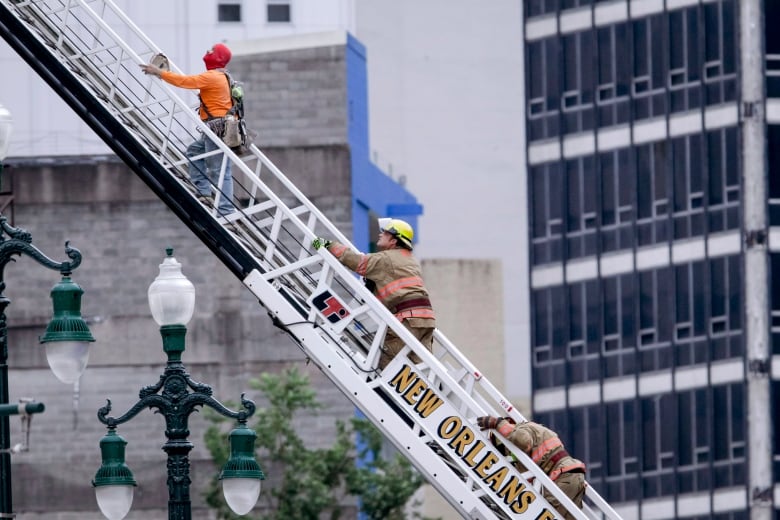 A rescued worker, left, and a firefighter look back at the damaged building after a large portion of a hotel under construction suddenly collapsed in New Orleans on Saturday. (Scott Threlkeld/The Advocate/The Associated Press)

The building was under construction at the corner of Rampart Street and Canal Street, a broad boulevard just outside the French Quarter, lined with restaurants hotels and retailers. Canal, which carries six lanes of traffic divided by a wide median where streetcars roll, separates the Quarter from the city's main business district.

Authorities say 18 people were taken to a hospital for treatment. All were considered stable.

Edwards visited the scene and urged people to stay away from the area, which was still considered unstable. As dust settled following the morning collapse, twisted metal, concrete pilings and other wreckage covered part of Rampart Street.

"It was a deep rumbling sound," Matt Worges, who saw the collapse from a nearby building, told The Times-Picayune | The New Orleans Advocate. "Like an airplane maybe. It drew my head immediately."

Ruby Rose opens up about depression and past...

5 Someone On Twitter Came Up With A Murder Mystery TV Show...