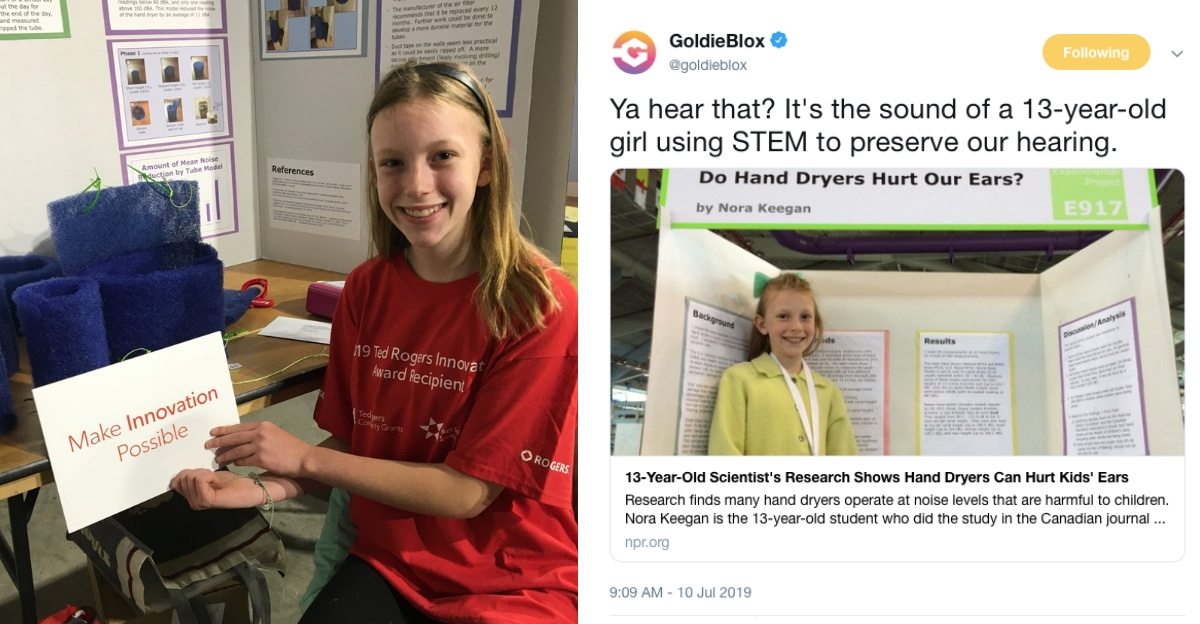 If you've ever been in a public restroom with a small child, you may have heard them complain about the hand dryers or seen them covering their ears as they walk by them.

It turns out, there's a scientific reason for that.

Nora Keegan of Calgary, Canada just published a paper in a medical journal with research proving that hand dryers may be detrimental to children's hearing. But the coolest thing? She's only 13.

When she was younger, Keegan noticed that her ears would sometimes ring after she starting using hand dryers in public restrooms. "I also noticed that children would not want to use hand dryers, and they'd be covering their ears," she told NPR.

So at age 9, she decided to explore whether automatic hand dryers might actually damage children's hearing. Between 2015 and 2017, she tested the volume of 44 hand dryers in public restrooms in Alberta, Canada. Using a decibel meter, she measured the noise levels of different hand dryers from various heights and distances.

Children's hearing is more sensitive than adults, and they hear the blowing from a different angle than adults do. As Keegan points out, "Hand dryers are actually really, really loud, and especially at children's heights since they're close to where the air comes out."

Keegan found that Xlerator brand dryers and two types of Dyson Airblades were the loudest, exceeding 100 decibels. In her study, she noted that that volume that can lead to "learning disabilities, attention difficulties, and ruptured ear drums."

"My loudest measurement was 121 decibels from a Dyson Airblade model," she told NPR. "And this is not good because Health Canada doesn't allow toys for children to be sold over 100 decibels, as they know that they can damage children's hearing."

Keegan's research confirmed her original hypothesis, and she presented her findings at a Calgary Youth Science fair earlier this year. Then, in June, her study was published in the Canadian journal Paediatrics & Child Health.

Keegan's published paper states, "Previous research has suggested that hand dryers may operate at dangerously loud levels for adults. No research has explored whether they operate at a safe level for children's hearing."

"More children lately are getting noise-induced hearing loss," the study continues, "and the more exposure children have to loud noises, the more likely they are to have hearing problems later in life. Children's sense of hearing continues to develop during their first several years of life, and loud noise exposure in this period can damage their hearing development."

The middle schooler told NPR that she hopes her study will lead to more research and eventually prompt to Canada regulate the noise levels of hand dryers.