Heavy rain in southern Japan triggered flooding and mudslides on Saturday, leaving more than a dozen people presumed dead, about 10 missing and dozens stranded on rooftops waiting to be rescued, officials said.

More than 75,000 residents in the prefectures of Kumamoto and Kagoshima were urged to vacate the areas following pounding rains overnight. The evacuation was not mandatory, and it was not known how many actually fled.

"I smelled mud, and the whole area was vibrating with river water. I've never experienced anything like this," a man in a shelter in Yatsushiro city, in western Kumamoto, told NHK TV. He said he fled early, fearing a disaster.

NHK footage showed large areas of Hitoyoshi town in Kumamoto inundated in muddy waters that gushed out from the Kuma River. Many cars were submerged up to their windows.

Mudslides smashed into houses and floodwaters carried trunks from uprooted trees. Several people were standing atop a convenience store as they waited for rescuers. 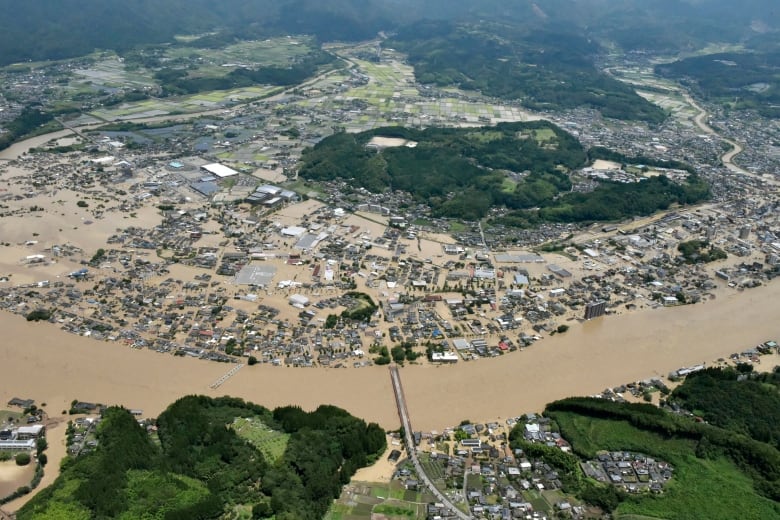 Areas are inundated in muddy waters in Hitoyoshi, Japan, on Saturday. (Kyodo News via AP)

Kumamoto Gov. Ikuo Kabashima later told reporters that 14 residents at a flooded elderly care home in Kuma village were presumed dead after being found during rescue operations. He said three other elderly residents had hypothermia.

They were among some 60 residents at the riverside care home Senjuen, where floodwaters and mud gushed in, stranding the residents, NHK said. The Japanese Self-Defence Force said it had dispatched troops to join rescue efforts at the site.

In another badly flooded town, Ashikita, six people were unaccounted for and a seventh was seriously injured, Kumamoto officials said.

In the mountainous village of Kuma, residents stranded at their homes were being airlifted by a rescue helicopter. In Hitoyoshi city, rescuers transported some residents in a boat. 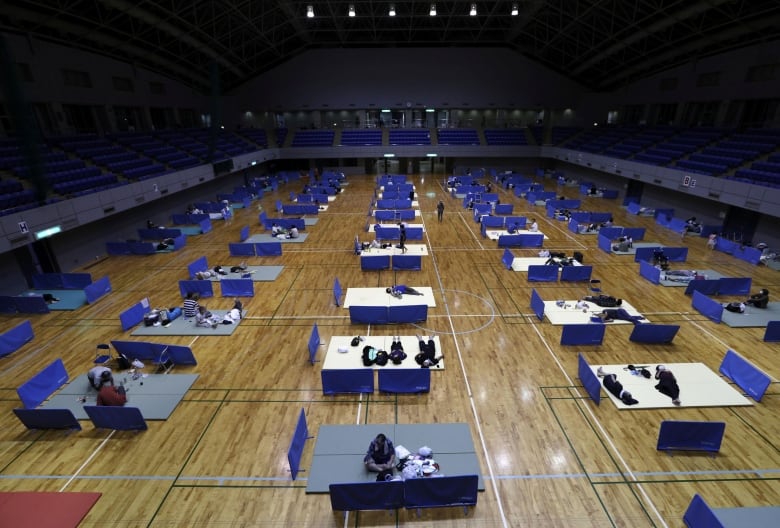 Residents are seen at an evacuation centre in Hitoyoshi on Saturday. (Kyodo/via Reuters)

Flooding also cut off power and communication lines. About 8,000 homes in Kumamoto and neighbouring Kagoshima were without electricity, according to the Kyushu Electric Power Co.

Prime Minister Shinzo Abe set up a task force and said up to 10,000 defence troops were being mobilized for rescue operations.

The Japan Meteorological Agency earlier issued warnings of extraordinary rain in parts of Kumamoto, which is about 1,000 kilometres southwest of Tokyo, but later downgraded them as the rainfall — estimated at 10 centimetres per hour — subsided.

7 Mike Johnson reveals his biggest life lessons after ‘The...

10 People Are Sharing Their Coronavirus-Inspired Tattoo...