Hours after a Kentucky grand jury brought no charges against Louisville, Ky., police for the killing of Breonna Taylor and protesters took to the streets, authorities said two officers had been shot Wednesday night during the demonstrations expressing anger over the deaths of Black people at the hands of police.

Interim chief Robert Schroeder said both of the officers suffered non-life threatening wounds and are in stable condition. One is undergoing surgery.

Schroeder said one suspect is in custody, but he gave no further details about the shooting.

Several shots rang out as protesters in downtown Louisville tried to avoid police blockades, moving down an alleyway as officers lobbed pepper balls. People covered their ears, ran away and frantically looked for places to hide. Police with long guns swarmed the area, then officers in riot gear and military-style vehicles blocked off roadways.

The protests, which rekindled as soon as news of the grand jury's decision broke Wednesday afternoon, appeared to be largely peaceful, although as the day wore on, police in protective gear clashed with protesters in some areas and used batons to push some of them down.

Officers in riot gear fired flashbangs and a few small fires burned in a square that's been at the centre of protests, but it had largely cleared out ahead of a nighttime curfew and demonstrators marched through other parts of downtown Louisville. Dozens of patrol cars blocked the city's major thoroughfare and more police arrived after the officers were shot.

Protests quickly erupted elsewhere: Demonstrators marched through the streets of New York, Chicago, Washington, Atlanta and Philadelphia. Packed into a New York City plaza, protesters chanted, "Say her name, Breonna Taylor," before marching in the street in downtown Brooklyn, past onlookers and honking cars. They were accompanied by musicians setting a steady drum beat. 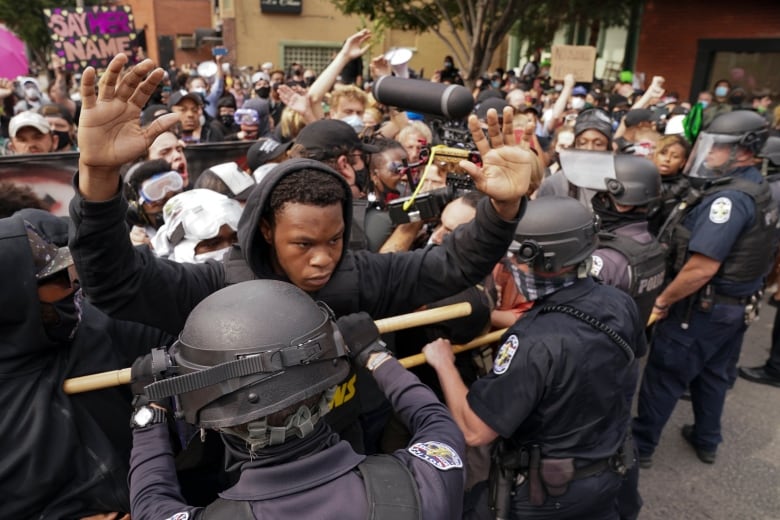 Police and protesters converge during a demonstration on Wednesday in Louisville. A grand jury has indicted one officer on charges six months after Taylor was fatally shot by police. (John Minchillo/The Associated Press)

Officers in Louisville during the afternoon detained at least four people, who sat on the ground with their wrists bound behind them. As television cameras broadcast the scene live, a protester pointed at an officer and shouted: "Say her name!" An Associated Press reporter saw National Guard members and armoured military vehicles in downtown Louisville.

"Yes, it's a bit extreme right now," said Dekevion Gause, who sat beside a park memorial to Taylor made of flowers, paintings, and tiny grave markers representing Black people killed by police. "But it's a volcano built up and now it's exploded."

Gause said all of the officers involved in the March 13 raid on Taylor's home should have been charged with manslaughter.

"It's kind of a slap in the face," he said of the grand jury's decision.

Gause gathered with dozens in Jefferson Square Park, dubbed "Injustice Square" by protesters who made it their impromptu hub during months of demonstrations. People huddled around a single speaker Wednesday to listen as prosecutors announced that fired police officer Brett Hankinson had been charged with wanton endangerment for firing into the homes of Taylor's neighbours.

Kentucky Attorney General Daniel Cameron lays out some of the evidence in the fatal shooting of Breonna Taylor, after a grand jury indicts one of three officers involved. 2:19

A grand jury brought no charges for killing Taylor, who was shot multiple times by police who burst into her home March 13 during a drug raid gone wrong. While there were no drugs in Taylor's apartment, her boyfriend shot and wounded a police officer. State Attorney General Daniel Cameron said the officers' shots that killed Taylor were fired in self-defence.

Upon hearing the news, many gathered in the square began to cry, expressing confusion and sorrow. Others exclaimed they had seen this coming. 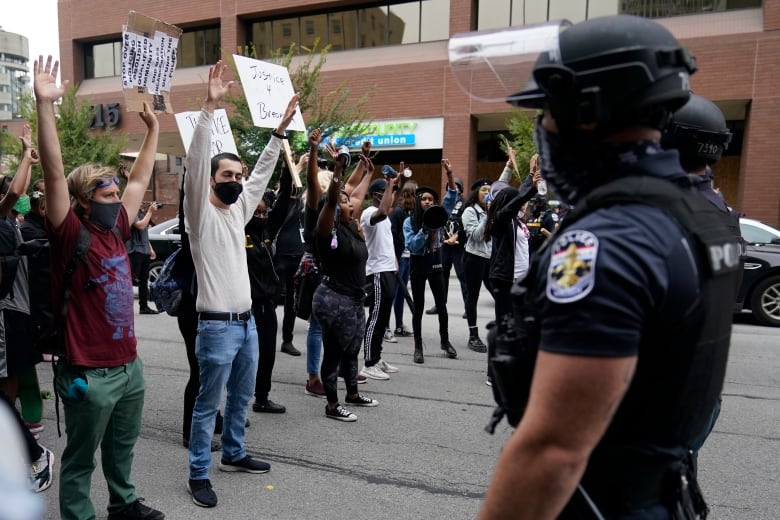 Within minutes of the announcement, about 100 demonstrators marched from Jefferson Square along the downtown thoroughfare of Sixth Street chanting: "No justice, no peace!"

Many simply sat or stood in stunned silence after hearing the grand jury's decision.

Jefferson Square became the epicentre of Louisville residents' outrage over the killing of Taylor, who became a national symbol of racial injustice much like George Floyd, the Black man who died under the knee of a Minneapolis police officer.

Cameron, a Republican and Kentucky's first Black attorney general, insisted prosecutors had followed the law even though "my heart breaks for Miss Taylor."

"Criminal law is not meant to respond to every sorrow and grief," Cameron said after the charges were announced.

For months, many actors, musicians, sports stars and public figures have been outspoken in calling for justice in the police killing of Taylor.

Dozens of NBA players, within the Disney bubble and outside of it have been seeking charges in Taylor's death and have used their platforms to speak about her and place the 26-year-old's name front and centre, above sports.

"We have moms. We have sisters, nieces, aunties. And just like men of colour have experienced traumatic instances, so have women," Boston forward Jaylen Brown said. "That is an example of some things that happen to women in our country. So, we wanted to stand alongside them, but also make it that it's not just us. I think the future is female, so it's important to show our sisters that we care. That's why it's been important."

Laker's guard Danny Green told the Associated Press that players feel that they've "taken a step back" and "haven't made the progress we were seeking." 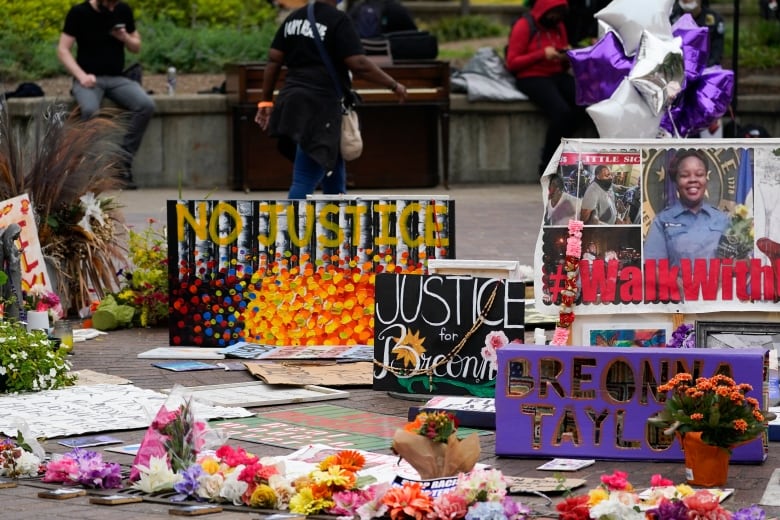 People gather in Jefferson Square near a makeshift memorial as they awaited word from the grand jury. (Darron Cummings/The Associated Press)

Football legend Colin Kaepernick also slammed the grand jury's decision, expressing outrage on Twitter Wednesday when he called for police to be abolished.

""The white supremacist institution of policing that stole Breonna Taylor's life from us must be abolished for the safety and well being of our people. #BreonnaTaylor #SayHerName #AbolishThePolice," he said.