This old news... See what we did there?

The fossilised bones of a tiny amphibian-like creature that scurried around the shores of County Clare 325 million years ago have been discovered by Dr. Eamon Doyle, geologist for the Burren and Cliffs of Moher UNESCO Global Geopark and Clare County Council.

The fossil belongs to a small amphibian creature that would have fit in the palm of a human hand. It lived during the Carboniferous Period, which lasted from 360 to 299 million years ago.

It was during this time that sea creatures began to emerge from the water and colonise the land.

The bones' discovery has been detailed in the latest edition of Irish Journal of Earth Science by Dr. Doyle and Aodhán Ó Gogáin of Trinity College, Dublin. The bones come from a leg and possibly a hip bone from a small amphibian that would have been an ancestor to the first lizards which ultimately evolved into the dinosaurs 100 million years later.

A study of the bones confirmed that the fossils are "the oldest stratigraphically well-constrained tetrapod skeletal fossil material described from Ireland."

Below is an artists rendering of the creature, created by Rachel Carr of National Museums Scotland. 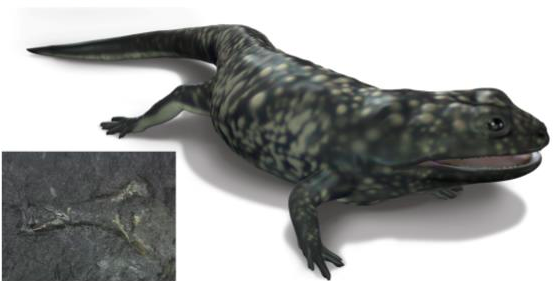 Many creatures like the lil fella above would have been scurrying around the coast of Clare hundreds of millions of years ago.

4 Real Estate Agents Ask For Photos Of The House For An...

6 Family Asks Neighbors To Help Them Pick Paint For Their...