Home /
NEWSiNi /
A hopeful, open letter to Susan Collins from someone who worked hard to defeat you

A hopeful, open letter to Susan Collins from someone who worked hard to defeat you 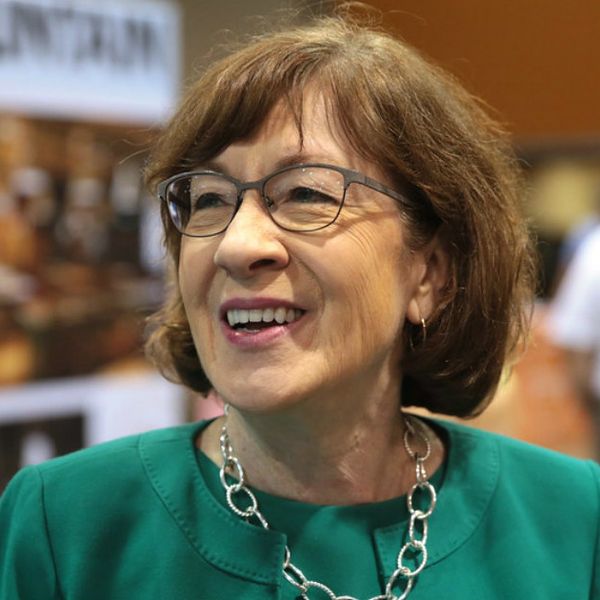 I have something I would like to say to you, Senator Susan Collins.

My name is Tim Mercer. Yes, the same Mercer who's mother appeared in an ad on television opposing you this past election. And yes, the same Mercer who's brother put out multiple full page ads in the Portland Press Herald and got national attention when you refused to answer his questions in an airport a year ago. But before you tune me out, I would like you to hear me out. Some things might be hard to hear, but I assure you there is a light at the end of this tunnel.

First off, I would like to congratulate you on your decisive win over Sarah Gideon to retain your seat as senator for the great state of Maine: a state my family calls home—a place I have lived for over 10 years of my life. Even though I have disagreed with you on most issues, you have potential to be the best person for the job. Not for the senator you are right now, but for who you could be.

Over the past few days, I've discussed your voting record, position on issues and your commitment to Maine and the United States with numerous people who work with you and held positions within the walls of the state capitol in Augusta, ME. In recent years, I had become disenchanted with your ways, and full disclosure, I was going to write you an angry letter. But as I heard these people talk about you, I realized that you have their respect. The people who disagree with you had some good things to say, as did those who are more alined with you. They were all very candid, so there were no perfect scores, but that is okay. I don't trust perfect.

With every conversation I had, there was one consistent tone: hope.

You clearly have something special with the people of Maine based on your tenure as their representative spanning over two decades. Not only that, but you won convincingly as a Republican in a state that favored Democrat, Joe Biden, as their choice for the next president of the United States. You are clearly doing something right. But you have done some things wrong, too. The first thing that comes to mind is Justice Brett Kavanaugh.

This was your opportunity for that career-defining moment. But instead you voted for Kavanaugh in 2018. Eight months later, you told the New York Times you didn't regret that decision. Why? I know you received harsh criticism, and I understand where it came from. In supporting Kavanaugh, you've threatened the safety of women and their right to choose. With your pro-choice views, which we agree on, you were the Republican that should have voted against Kavanaugh. I am not sure if you were pressured or made some sort of deal with Trump, but either way it wasn't a good look.

Although you claim to be a champion for women's rights, when the national spotlight was on you, you disappointed a large amount of people. It was your chance at the big solo and we were expecting to hear this glorious note, but instead, we got Selena Gomez without the auto tune. You could have knocked it out of the park by making a decision that would forever put you down in the books for standing against alleged sexual assault. I wonder if you regret that decision now?

Then there's your bipartisan voting. It seems that you are able to boast a bipartisan voting record because you side with Democrats when your vote has no impact on the final result. That is like purposely putting your credit card down at a restaurant after someone else just footed the bill. It is a hollow gesture that has no effect on the situation, costs you nothing and makes it seem like you genuinely meant to do the right thing. When you are called out for voting the party line, you can just point to your record to show how often you have gone against the Republican narrative. Similarly, the person with the second fastest credit card reflex at an eating establishment, when accused of never picking up the tab, can always point out how many times they have tried to pay. Technically, neither of you are wrong, but I am sure you can see how it isn't right.

Another aspect of your voting that's troublesome to many is your voting record for taxing the wealthy. I was talking to a friend of mine a few weeks ago, and while he is a multi-millionaire, he says he only pays 4% in taxes. I pay over 20% (and let's just say I am not expecting an American Express Black card to show up in the mail anytime soon). According to Politicsthatwork.com, you vote to tax the wealthy only 18.2% of the time. I understand there might be a margin of error on those statistics, but I am pretty sure it isn't 81.8%. There are so many hard working people in the state of Maine and across the country who desperately need your help.

Also, I do find it strange that you haven't held a town hall meeting in 20 years. As a woman of the people, which you claim to be, I don't understand why you wouldn't be eager to hear our voices much less avoid them. Then I heard something interesting that every single person I talked to who worked with you confirmed. You have a reputation for having thin-skin. Face-to-face adversity appears to be difficult for you. There was even someone who organized an event that you spoke at, recalling your extremely unusual request to see the RSVP list so you could seemingly vet them. Speakers look at those list all the time out of curiosity, but this was different. My guess is that you probably know what I am referring to. My point is that I think I understand you a little better now. You seem to want to control your environment. Perhaps you should let go of that and start holding town halls more often. You might take a few lumps, but you will also get plenty of praise from your supporters—especially if you take more steps to look Mainers in the eye and connect on a human level.

Finally, I need to ask this because I would be remiss if I didn't: Is the support you have shown for President Trump over the past four years genuine?

I know the Overton Window moves left and right, but Trump has found a way to make it move down. In other words, statements and actions so juvenile, rude and completely baseless used to mean the end of a political career. For President Trump, it is known as "every day of the week." I challenge you to find a 30 second clip from any of Trump's rallies where he doesn't insult someone or make it about himself. The man has successfully divided the United States of America to a level I never thought possible, and that is not an easy thing to do.

I find it hard to believe that you, a public servant for 23 years, doesn't cringe on an hourly basis about the fact that you have to report to a misogynistic narcissist with no political experience, who doesn't pay his taxes and has the bed side manner of Triumph The Insult Comic Dog. You will soon be free of him, and you will have a chance to work with the Biden administration, a president who possess dignity and values. You might not always agree, but at least it will be an adult conversation.

The gridlock in Washington is the most dysfunctional it has ever been by far. You know this, Susan. You have a front row seat. You could be the spark that leads to a different way of thinking. This country was so desperate for anything other than business-as-usual in our federal government that they elected Donald Trump, and continued to convince themselves that his behavior wasn't that of a spoiled five-year old who needs attention. All the time.

People need to remember that you were a maverick in years past. I believe you can get back the ear of the Democratic constituents you lost and keep the Republican ones so loyal to you. Someone has to break this seemingly endless and profoundly dangerous cycle of behavior on Capitol Hill. There needs to be a first, and I really think you could be her. Forget about who is Democrat and who is Republican, and lead by example. Someone needs to step up and it may as well be you. We as Americans know the difference between disingenuous actions and those that are pure of heart. If you lead the way, people like my mother, my brother and I will all be right behind you.

By the way, I also think I understand why you didn't (or couldn't) answer my brother's questions when he approached you in that airport last year. Maybe it is because you couldn't in good conscience give an answer when he asked questions like, "What do I say to my daughter when president uses language on a daily basis that would get her kicked out of school?" Maybe it is because you couldn't justify it either, but you had to be loyal to your party. Those days are behind you and you made it through. You have the next six years to get your "maverick" on and make a difference. And I can't wait to see what you do.

This country has too much potential to keep gong down a path where the best case scenario is everyone being consistently angry and growing even more divided. The worst case scenario is all-out civil war, which doesn't seem far fetched enough at this point. President Trump's version of unity is telling militia groups like The Proud Boys to "stand by," and it is scary to think about what that might lead to. Those guys seem like the kind of fellas that could cause a great deal of chaos. I do believe we all want the same thing: freedom, unity and the pursuit of happiness. We have dug ourselves quite a hole, but Susan, if you can be the catalyst that pulls us out of it, you will be one of the most important trailblazers in political history.

Make America great again, because the last guy who preached those words kind of went the other way on that one. If you can pull this off, even if you put your credit card out first, I will be the first one to buy you dinner.

Google is testing an AI system to help...

New Details About Jen Harley's Sex Tape And The...

2 Trump Says He Will “Certainly” Leave White House If...

3 Former Home and Away star Kyle Pryor sheds light on his...

7 The Godfather Part III's Director's Cut Has Earned One Of...