Home /
News /
A tale of 2 cities: Venice residents are torn between mass tourism and a more harmonious existence

A tale of 2 cities: Venice residents are torn between mass tourism and a more harmonious existence

Francesco Penzo stands straddling a sandolo, a low boat Venetians once used for shooting ducks. He manoeuvres a long paddle deep into the water, steering the vessel around the corner of a canal in the former working-class neighbourhood of Cannaregio, the only sound the creaking of wood and birdsong echoing above.

Cannaregio is one of the few areas in Venice that had not been overtaken by tourists and souvenir shops before the devastating "acqua alta" flooding in November, followed by the coronavirus quarantine in March that locked down Italy for more than two months.

Yet as we glide past a row of gorgeously crumbling palazzi, Penzo points out a small brick building ahead that he says encapsulates the real crisis his city faces: not COVID-19 but what COVID-19 has made painfully clear.

"That's where I live," says the housing activist, who works in the insurance business for his day job. "Of the 10 apartments in there, four are Airbnbs, four are second homes and only two have people actually living in them."

Without tourists, in other words, there is hardly anyone left in Venice.

WATCH | The sights and sounds of a Venice canal

Francesco Penzo manoeuvres his sandolo along a peaceful canal in Venice, through the former working-class neighbourhood of Cannaregio. 0:54

It wasn't always this way.

In the 1970s, upwards of 150,000 people resided in the lagoon city. Today, it's home to just over 50,000, with the population shrinking by 1,000 each year — half from older people dying, half from people leaving due to soaring housing costs and lack of job opportunities.

A massive flood in 1966 triggered the initial exodus, with Venetians fleeing to the nearby mainland city of Mestre, part of the Venice municipality, and staying. Former residents began converting their Venice homes into short-term rentals and hotels; the advent of low-cost airlines and Airbnb did the rest.

"When I grew up here, Venice was crowded, but crowded with Venetians," says Aline Cedron, an editor raising two teenagers in Cannaregio. Cedron is one of 3,000 members of Gruppo 25 Aprile, the latest incarnation of various citizens' groups that have been trying for several decades to to return Venice from being what they call a 15th-century theme park to the vibrant, lived-in city it once was.

'A different way of life'

Here in Cannaregio, for a moment, you can almost believe the city is alive and well. We stroll through a lush, walled park with children scrambling up slides, then past a square with elderly residents chatting amiably on benches as kids kick a ball against a wall.

It's hard not to feel a pang of envy to see how relaxed urban life can be — not only without tourists, but without the noise, exhaust and danger of cars. Neighbours congregate at the end of the day in local cafés for bright orange spritzes, the Venetian cocktail now popular around the world. Crime throughout the whole lagoon city is practically non-existent. 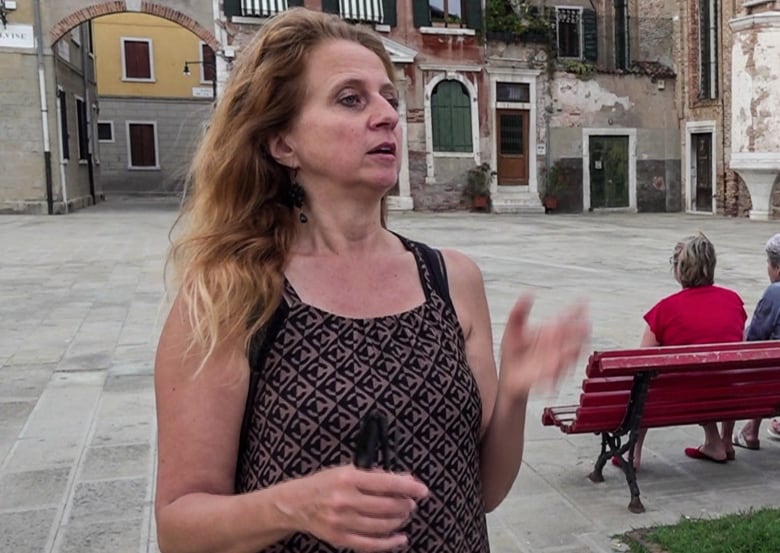 Aline Cedron, who lives in Cannaregio, is a member of Gruppo 25 Aprile, one of various citizens' groups that have been trying for several decades to return Venice from being what they call a 15th-century theme park to the vibrant city it once was. (Chris Warde-Jones for CBC)

"Venice is an example of such a different way of life for the entire world, and in my experience, a high quality of life. Having to walk everywhere, you are constantly meeting people, and the social aspect of this life is very, very precious," Cedron says.

Precious, but with a mono-economy of mass tourism that is perilously lacking in resilience, say even those who depend on that economy.

Across Venice's once highly trafficked thoroughfare, the Canal Grande, master gondola maker Lorenzo Della Toffola bangs nails along the reddish bottom of a gleaming black boat resting on its side in his squero, one of the few traditional boatyards in Venice that remain. His son Alberto, in his late 20s and the only offspring apprentice in Venice's boatyards, works on another gondola inside a long shed.

Business has been slow, with gondolier owners waiting for customers to return before bringing their boats in for annual repairs. Despite his reduced income, though, Della Toffola says the post-quarantine period is a historic occasion for Venice to shift course. 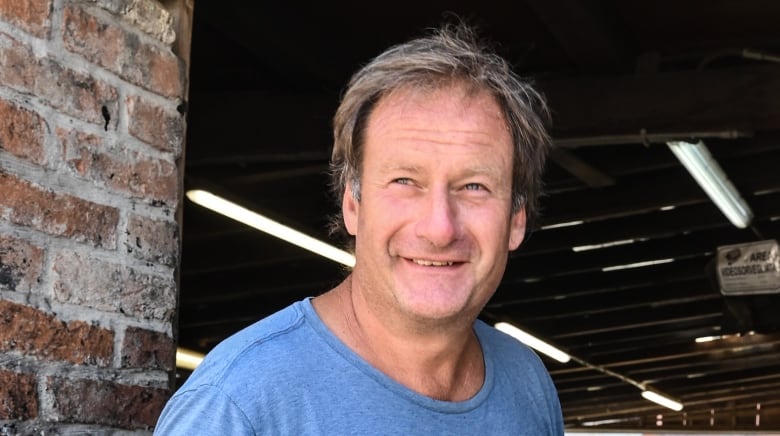 Lorenzo Della Toffola, a master gondola maker, works in his squero, one of the few traditional boatyards in Venice that remain. (Chris Warde-Jones for CBC)

"Let's hope this time people get it," he says. "That we just can't go on with the old number of tourists. We need local artisans, who make the city healthier, realer and don't have anything to do with all the [tourist] junk ... sold on the streets. We need Venetians to return, bakers and butchers. You just can't have a city based only on tourism."

Upwards of 25 million tourists, mostly day trippers, pour over Venice's walkways, bridges and campi — small squares — each year. Despite efforts by activist groups to ban cruise ships, the mammoth vessels still loomed in the backdrop until the coronavirus lockdown.

"We want a tourism that is more aware," says Laura Scarpa, president of Venezia da Vivere, a network that promotes Venetian artisans, artists and fashion designers. "We want people to visit with intentionality, to get to know our history and artisanal traditions and not just come to stand in Piazza San Marco and take a selfie." 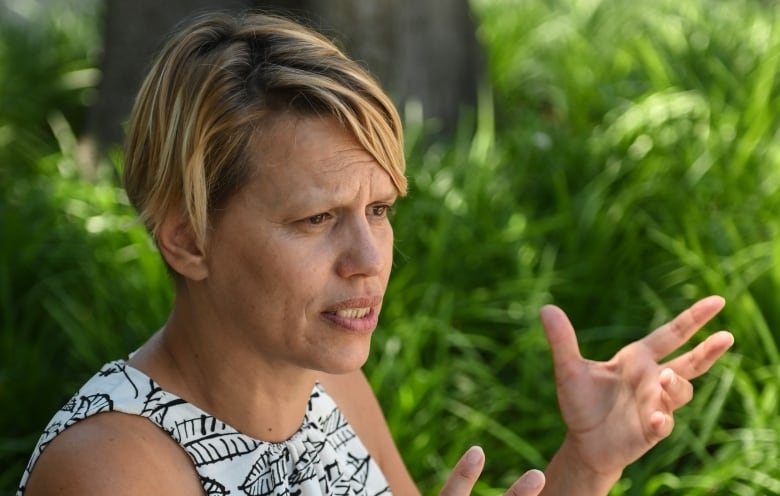 Laura Scarpa is president of Venezia da Vivere, a network that promotes Venetian artisans, artists and fashion designers. The group has launched a debate asking residents to 'rewrite' the future of Venice. (Chris Warde-Jones for CBC)

Scarpa's group and most others like it say diversification of the city's economy is the only way forward. Venezia da Vivere has launched a debate asking residents to "rewrite" the future of Venice, posting interviews with residents who have ideas for sustainable alternatives to tourism and incentives for residency.

Many would like to see environmental studies become a cornerstone of Venice's Ca' Foscari university, given how vulnerable the city is to rising ocean levels brought on by climate change. They want to improve wireless connectivity to encourage people who work remotely to live here.

They're pushing for tax and housing incentives for its craftspeople and artists, who, they say, not only represent a continuum with the city's past of textile, lace-making and glassworks, but who could lead the way in recreating vibrant and mixed urban spaces where people both work and live. 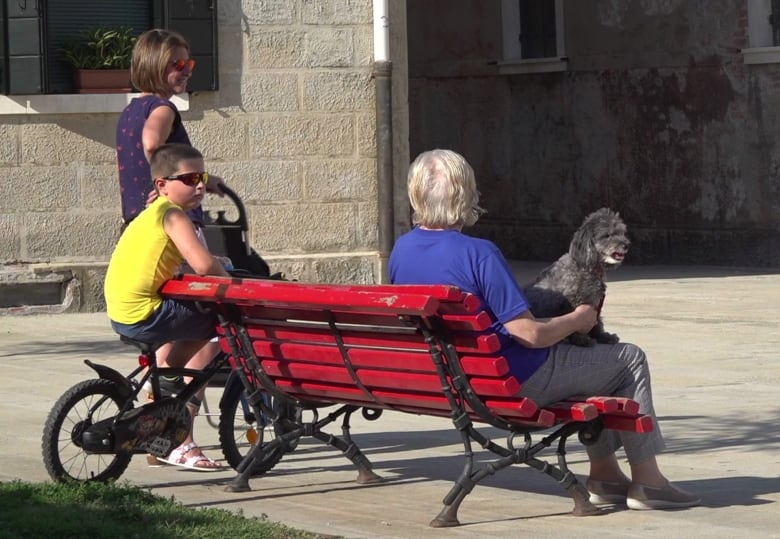 Local residents of all ages relax in the Cannaregio neighbourhood of Venice, where urban life is peaceful without tourists and the noise, exhaust and danger of cars. (Chris Warde-Jones for CBC)

It's a vision, they say, that all levels of government have failed to provide. They point out that Mayor Luigi Brugnaro and most city councillors reside in the mainland Mestre, not in Venice proper. As a result, they believe, the administration tends to view the lagoon city as a money-making operation, rather than an actual community.

It's a depiction Paola Mar, the energetic city councillor responsible for tourism who also lives in Mestre, refutes. She insists the municipal government does have ideas on how to move away from mass tourism — in place even before the COVID-19 pandemic hit.

She cites a program encouraging "slow tourism," charging a fee to day trippers, brochures promoting decorum that urge tourists not to litter and loiter — an issue also championed by past mayors — and the installation earlier this year of sensors at the city's various entrances to count the numbers of visitors and better control the influx.

"It's beautiful but disturbing," Mar says of the now-empty Venice. "Tourism is the most important industry ... but we need to do more to help young people afford to live here." 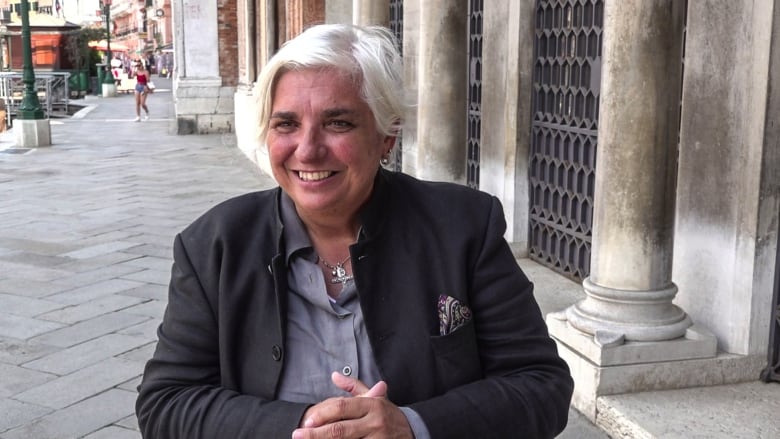 Paola Mar, a Venice city councillor responsible for tourism, says the municipal government has ideas on how to move away from mass tourism — which were in place even before the COVID-19 pandemic hit. (Chris Warde-Jones for CBC)

To that end, post-lockdown, Venice has struck a deal with the university for the vacant Airbnbs to be rented to students. It is also encouraging tourist shops to convert to corner stores, bakeries and fruit stands, now sorely missing, for residents. And it is moving forward with assigning 360 newly renovated subsidized municipal apartments to young families.

But critics call the initiatives a drop in the bucket and say that renting to students until tourists return mostly helps Airbnbs — many of which are owned by large companies with no real stake in the city.

What is striking, though, when listening to city authorities and citizens wanting change, is how similar their message is: in a nutshell, the need for Venice's tourism to move from "mass to class."

But others say even that is cause for caution.

In a recent blog post entitled "Which residents?" urban thinker Paola Somma questions both the emphasis on "quality" tourism and attracting a "new creative class" — the kind of people who attend the Venice Biennale, a showcase of cinema, art, architecture, theatre and dance. She suggests the phrases are merely code for attracting millionaires and celebrities at the expense of working people. 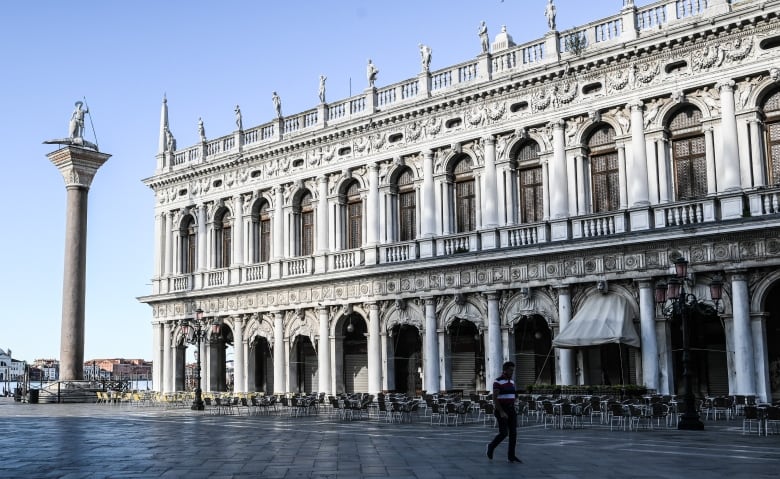 An empty St. Mark's Square in June. How to save the beautiful but moribund city isn't a new debate, but the COVID-19 pandemic has brought such nagging questions to the forefront. (Chris Warde-Jones for CBC)

Venice is not so much an empty tourist city as a "hedge city," Somma argues, its centuries-old structures not vacant but stuffed with investment dollars by the world's wealthy. As Venice's mayor tells residents protesting over tourism or cruise ships to "go live somewhere else," he publicly fetes people like actor Emma Thompson as new "Venetian citizens" after they purchase property here.

How to save this exquisitely moribund city is hardly a new question. But with the COVID-19 pandemic — along with the chance to move through quiet canals, to hear Venetian accents ring purely through the air and to gaze, unobstructed, upon works by Renaissance masters Tintoretto or Titian — these nagging existential questions have been laid bare as never before.

Many citizens say they will do all they can to seize this moment and to stop "La Serenissima" from returning to its "old normal."

But they also say the risk has never been greater, either.

"It's true this is an opportunity for Venice," says Francesco Penzo, steering the sandolo toward the open, uncluttered waters of the Canal Grande. "But this crisis could be used to justify not just a return to mass tourism, but to even more mass tourism. Real transformation never comes with a shock but with a plan. And Venice doesn't have one."

Activists in the U.S. claim partial victory in...