Home /
News /
Amid the country's economic collapse, many Sri Lankans struggle to eat

Amid the country's economic collapse, many Sri Lankans struggle to eat The lineup at the soup kitchen window, where volunteers are dishing out heaping plates of curry and rice, is long yet orderly, with men, women and children calmly waiting their turn for their meal.

Patience is something many in Sri Lanka are clinging to, as food prices have spiked by 90 per cent and cooking fuel and gasoline are in short supply in this island nation crippled by economic collapse and political instability.

Ranjani Subramanium, 39, eats timidly at the community kitchen outside the capital, Colombo, grateful for the hot lunch. The single mother frets constantly about how to feed her young daughters. Her meagre means of income is selling betel leaves to support her daughters, aged two and 12, and 15-year-old son.

"We are so helpless. I am unable to give my children even one proper meal a day because of the way the country has fallen," she told CBC News through a Sinhalese translator. Before this, she said they ate three good meals a day.

Now, "we don't have anything," she said with resignation. 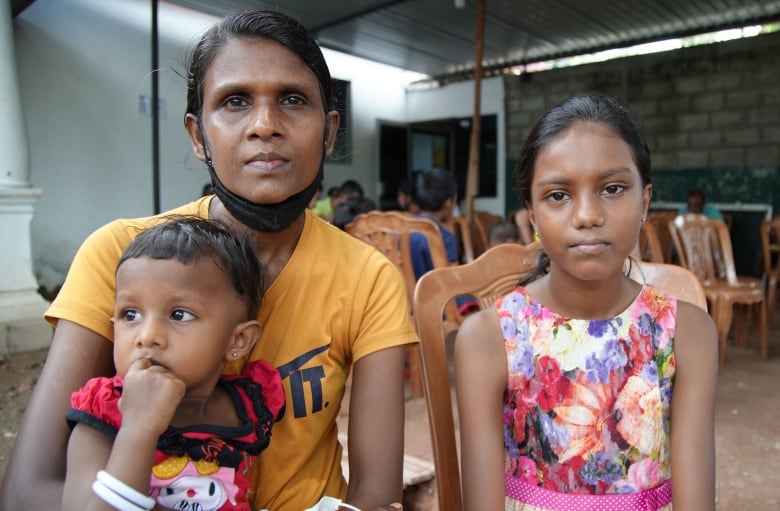 Subramanium spends nights worrying about her children's future, with schools in Sri Lanka limited to only three days of in-class attendance a week due to the fuel shortages plaguing the country. Subramanium can't afford the computer needed for her older daughter to log onto the online classes scheduled on the remaining two days of the week.

"It makes me sad when she tells me that the other children are studying online but she doesn't have a way to join them," Subramanium said.

She is not alone in her struggles to feed her family. Food prices in Sri Lanka are double what they used to be and the country is bankrupt, a dire situation many blame on the ruling class and Sri Lanka's recently ousted president, Gotabaya Rajapaksa.

'I don't see a light at the end of the tunnel'

The community kitchen, one of 12 across the country, serves up hot meals at lunchtime every weekday, and is run entirely on donations and the work of volunteers, who scrounge for firewood to prepare the food because of the cooking fuel shortages.

"Sometimes we get people who are only surviving with this particular meal for a day," said Moses Akash, director of Voice for Voiceless Foundation, the charity that runs the soup kitchens. They are getting busier by the day, and Akash said he's working on opening more locations in the coming weeks.

2 days ago
Duration 2:50
Sri Lankan citizens say they're struggling to make ends meet amid an economic crisis and sky-high inflation.

"I don't see a light at the end of the tunnel right now, because the need has been increasing," he said.

As vendors at Colombo's once-bustling Pettah Market sit idly waiting for customers to arrive, they speak of having to skip meals themselves and praying to make enough money to pay the rent.

Vegetable seller Mohamed Ikram has seen his sales dip by more than a third, leaving his daily income the equivalent of about $9 Cdn.

"People just ask for prices and leave without purchasing anything," he said through a translator. 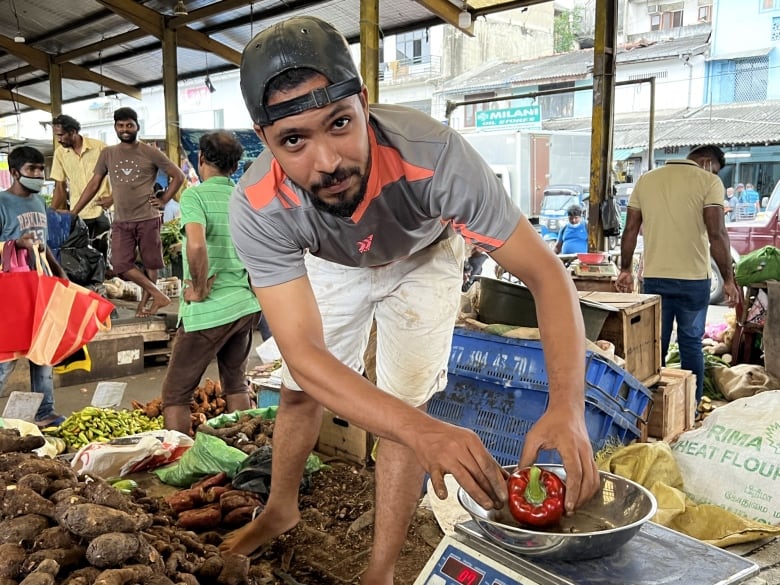 Vegetable seller Mohamed Ikram has seen his sales dip by more than a third, leaving his daily income at the equivalent of about $9 Cdn. (Salimah Shivji/CBC)

That pain has hit Sri Lanka's poor the hardest, with the economy in ruins and foreign currency reserves depleted. Earlier this year, as inflation continued to soar, protesters came out in droves to voice their displeasure at the ruling class, seen as complicit in the financial collapse.

In May, the country defaulted on its debt for the first time in its history, and while it's in negotiations with the International Monetary Fund to come to a bailout agreement, the government is scrambling to scrape together enough money to keep the economy afloat.

The crisis has forced Sumila Wanaguru, an economist at Sri Lanka's Central Bank, to adapt. She now spends her time analyzing the country's daily cash flow to the most minute degree to try to keep it balanced with what's going out. She said she and her team have been reduced to begging and pleading with allies for lines of credit and currency swaps. 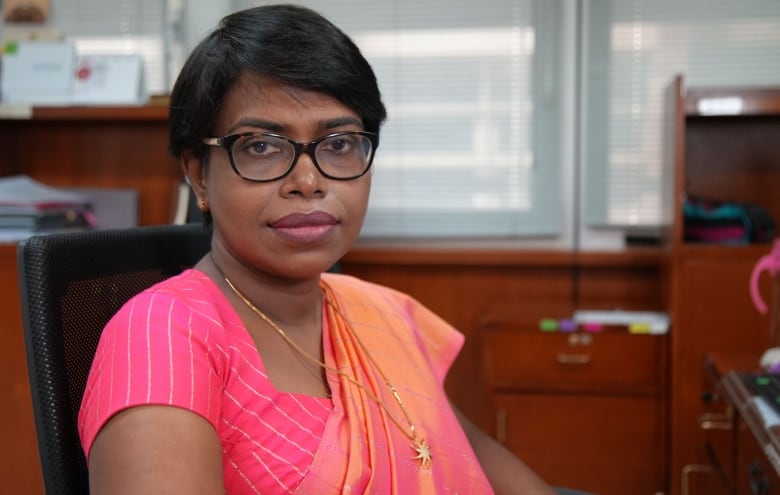 Sumila Wanaguru, an economist at Sri Lanka's Central Bank, spends her time analyzing the country's cash flow to the most minute degree to try to keep it balanced with what's going out. (Salimah Shivji/CBC)

"The job is very tough these days," said Wanaguru, director of the bank's international operations division. "Our [cash] supply is limited because the central bank's liquid foreign reserve level is at a critically low level."

That means essential imports such as drugs and fuel are also at critically low levels.

Steven Labrooy, who was waiting in line outside a Colombo gas station for a weekly quota of 20 litres — or half a tank for an average car — could barely contain his indignation.

"It feels humiliating. I'm so furious with the politicians who have caused this."

Labrooy said he's plagued by a thought in the back of his mind, a deep fear that nobody will be held accountable for sending Sri Lanka hurtling toward an economic meltdown.

"If past records are to go by in this country, people rob the country blind and then get away with it."

How Sri Lankans are coping with political and economic turmoil

1 day ago
Duration 3:03
CBC's Salimah Shivji gives an inside look at how the political and economic unrest in Sri Lanka is hurting everyday people.

The simmering frustration from Sri Lankans enduring economic agony for reasons beyond their control boiled over last month, with thousands of protesters storming president Gotabaya Rajapaksa's residence and office, ultimately ousting him from power.

Protesters blamed Rajapaksa, and his family's nearly two-decade-long grip on power, for the economic collapse, precipitated by their gross mismanagement of Sri Lanka's finances.

"At one level, it is basic incompetence. At another level, it is the arrogance of not listening" to either the public or his advisors, said Paikiasothy Saravanamuttu, executive director of the Colombo-based Centre for Policy Alternatives.

He said Gotabaya Rajapaksa is directly responsible for the massive scale of the crisis that Sri Lanka finds itself in, with his affinity for eccentric policymaking.

"He cut the tax base and, as a consequence, the Treasury lost something like 600 billion rupees," Saravanamuttu said. "Then, he decided to move to organic fertilizer for agriculture overnight. The decision itself was not bad. But to do it overnight was catastrophic for agriculture in this country."

Rajapaksa's replacement as president, longtime politician Ranil Wickremesinghe, was voted into office by his fellow parliamentarians in late July.

He's not seen favourably by many of the protesters, and Saravanamuttu said that unfavourable opinion could cause problems as the country moves forward with bailout talks with the IMF.

"There are going to be some very tough conditionalities. People are going to have to make even further sacrifices," the analyst said, adding that the government's main task is to convince people that tough reforms are not only necessary, but possible.

"The question is: can the Ranil Wickremesinghe government do it?"

Those involved in the protest movement, which has been the target of a crackdown by authorities since Wickremesinghe assumed office, think the answer is "no." 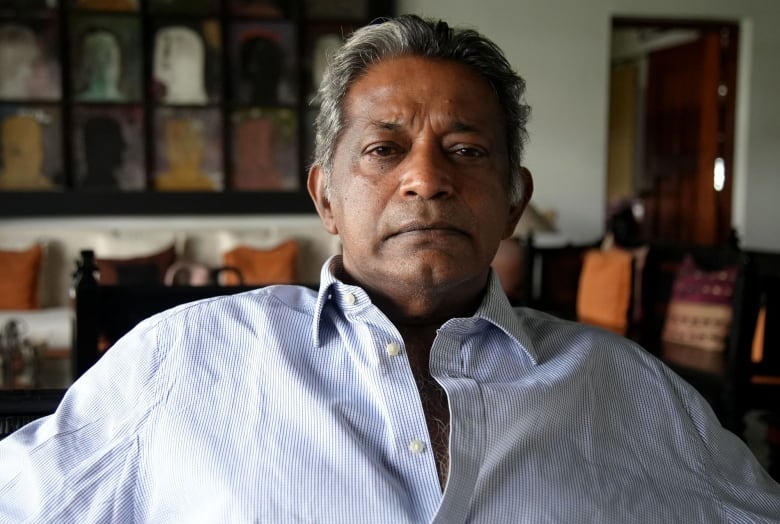 Paikiasothy Saravanamuttu, executive director of the Colombo-based Centre for Policy Alternatives, says the current economic crisis is partly the result of the former president's 'incompetence.' It's also 'the arrogance of not listening' to both the public and his advisors. (Salimah Shivji/CBC)

"I don't accept Ranil Wickremesinghe as my president," said one full-time protester, whose name CBC is withholding because she fears arrest. "He's not the kind of system change we've been asking for over the last four months, so we're not satisfied with his leadership."

The protester worries her movements are being tracked, after several of the most high-profile demonstration leaders were arrested, while others were slapped with travel bans. The main protest camp site across from the presidential offices has also been ordered cleared by police.

"We just don't feel safe," she told CBC. "Lots of my friends have already had visits to their house from the police."

Opposition MP Harsha De Silva is willing to give Wickremesinghe, his former boss, a chance to try to tackle the deepening crisis. But it's his view that a crackdown on protesters who stormed the former president's office is counterproductive and would detract from the urgency of carrying out reforms to revive the economy.

"This was civil disobedience," De Silva said. "These are not criminals to be arrested. One guy was arrested because he sat on the president's chair. What nonsense is this?" 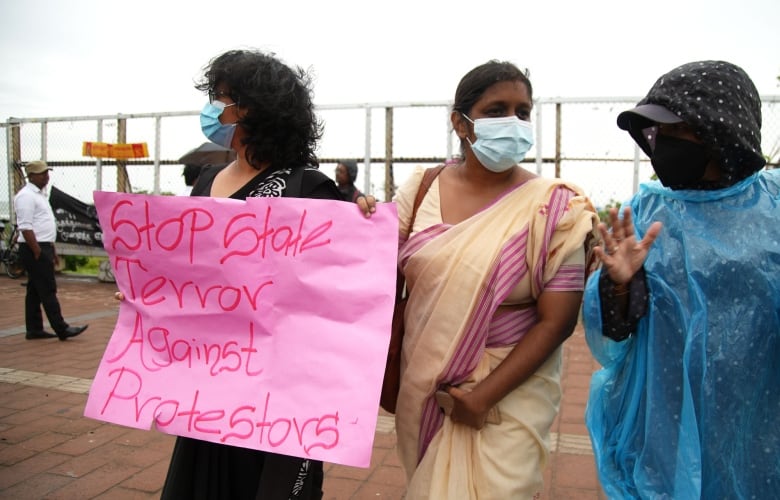 De Silva is pushing for an all-party cabinet, arguing that the people of the country want to see politicians working together to "reset" the country and implement sweeping reforms.

"People are angry. People are disappointed. People have lost hope in the future," De Silva said.

"Everyone's trying to get out of here," he added, alluding to the long lines outside passport offices of Sri Lankans hoping to escape the crisis.

But not everyone can entertain that option. For those still inside the country, the crisis is inescapable, even at a high-end pharmacy in an affluent neighbourhood in central Colombo.

Manning the counter, Sathees Murugesan said he's been able to keep his shelves stocked with most medicines, but the markup is staggering. Virtually his entire inventory, from aspirin to asthma pumps, has doubled or tripled in price and he's unsure how long that will continue.

"Nobody really knows what's going to happen," the pharmacist said. "It's like every day, people wake up and just hope that things will be OK today." 'Waiting for our death': Afghan military...