The organizer of a Southern California rally against racism was charged with attempted murder Tuesday for driving her car into a crowd of counterprotesters.

Orange County prosecutors said Tatiana Turner deliberately drove into a crowd of U.S. President Donald Trump's supporters with the intent to kill a woman, whose head she drove over, and seriously injured another man who broke a leg.

A defence lawyer said Turner tried unsuccessfully to get help from deputies after her group protesting police brutality Saturday in Yorba Linda was overwhelmed by hostile counterprotesters.

Turner feared for her life when she got into her car surrounded by Trump supporters and was trying to get away from the crowd and didn't intend to hit anyone, attorney Ludlow Creary II said.

Turner, 40, made her first appearance in court remotely from the jail and was ordered held on $1 million US bail. 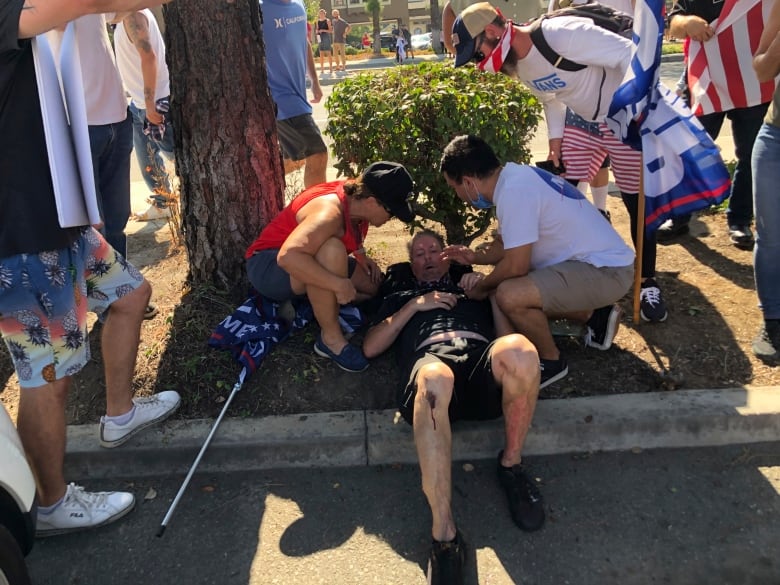 A man lies injured in a library parking lot after being struck by a car during the protest. (Brian Rokos/The Orange County Register via The Associated Press)

Turner, who has a felony record for drug sales and domestic violence, is also charged with six counts of assault with a deadly weapon, including one count for causing great bodily injury, mayhem, and two counts of the use of pepper spray by a felon.

The confrontation occurred on a sunny afternoon when Turner and the Urban Organizers Coalition had planned a march against police brutality and systemic racism outside the Yorba Linda Library, about 50 kilometres southeast of Los Angeles.

A group of counter-protesters, many of them holding American flags and wearing Trump garb, confronted Turner's smaller group. The conflict became heated and led to fights, authorities said.

Turner, who had seen counter-protesters with firearms, called 911 for help and "got the runaround," and then appealed to deputies who were patrolling the growing crowd, Creary said.

"Sheriff's deputies on scene didn't do anything, and the crowd of Trump supporters grew," he said. "It essentially was a hostile environment."

The sheriff's department said would look into those allegations. "I can't speak to the validity of those claims," spokeswoman Carrie Braun said.

Eventually, deputies declared an unlawful assembly and told the groups, estimated at 250 people, to leave.

One video showed Turner getting in her small white sedan as its surrounded mainly by a group of people the sheriff's office has described as the "Trump supporters." A voice can be heard saying, "Good luck getting out of here."

Three seconds later, the car moved forward into the crowd, pushing several people, including someone holding a sign saying "Black Behavior Matters," and a man wearing a Trump hat and a U.S. flag.

As the car paused for a second, the crowd moved in from both sides. Turner then accelerated and a man shattered her rear window as she sped away. The car lurched upward at one point as it rolled over someone and then kept going.

Anthony Bryson, who helped Turner organize the march, said the charges and bail amount are ridiculous.

The group, which has expressed sympathy for those who were injured, planned a news conference for Wednesday to point out the inconsistency with charges others faced who have driven into protesters in recent months.

On Thursday, a man driving a pickup truck who struck a woman protesting police brutality in Hollywood was not arrested as Los Angeles police investigate the hit-and-run.

Police said it appeared that driver was surrounded by a crowd of protesters who struck his vehicle with sticks and attempted to open the driver's door as he passed. He plowed into a woman protester as he fled, and she was hospitalized.

Jody Armour, a criminal law professor at the University of Southern California, said the different approach taken by law enforcement in the two counties could suggest different treatment for two people who feared for their safety.

"What you have is bookend cases to compare when two alleged perpetrators can each claim some kind of self defence or duress as an excuse for what they did," Armour said. "It does seems the officers are giving more deference to the claim of the pickup truck driver and less to her."

10 Max Ehrich’s supposed rebound from Demi Lovato has a...