A humanitarian ceasefire will take effect Monday morning in the fighting between Armenia and Azerbaijan over the mountainous enclave of Nagorno-Karabakh, a joint statement from the U.S. State Department and the two governments said on Sunday.

In a separate statement, the OSCE Minsk Group, formed to mediate the conflict and led by France, Russia and the United States, said its co-chairs and foreign ministers would meet again on October 29 to discuss the Nagorno-Karabakh issue.

This is a breaking update. A previous version of the story can be seen below.

Fighting over the separatist Nagorno-Karabakh region continued Sunday, as Armenia and Azerbaijan reiterated their commitment to a peaceful resolution of their decades-old conflict and blamed each other for hindering one after four weeks of hostilities.

Nagorno-Karabakh's military accused Azerbaijani forces of shelling civilian settlements in the areas of Martuni and Askeran on Saturday evening and said that battles "on all directions of the frontline" took place on Sunday morning. Azerbaijan's Defence Ministry, in turn, alleged that Armenian forces shelled the Terter, Agdam and Aghjabedi regions of Azerbaijan.

The recent outburst of fighting over Nagorno-Karabakh, which broke out on Sept. 27, has gone on despite numerous calls for the cessation of hostilities and two attempts at establishing a cease-fire. It is the biggest escalation in years over the region that lies within Azerbaijan but has been under the control of ethnic Armenian forces backed by Armenia since the end of a separatist war in 1994.

According to Nagorno-Karabakh officials, 974 of their troops have been killed in the clashes so far, as well as 37 civilians. Azerbaijani authorities hasn't disclosed their military losses, but said that 65 civilians were killed and about 300 were wounded on their side.

Russian President Vladimir Putin said Thursday that according to Moscow's information, the death toll from the fighting neared 5,000, which is significantly higher than what both sides report. 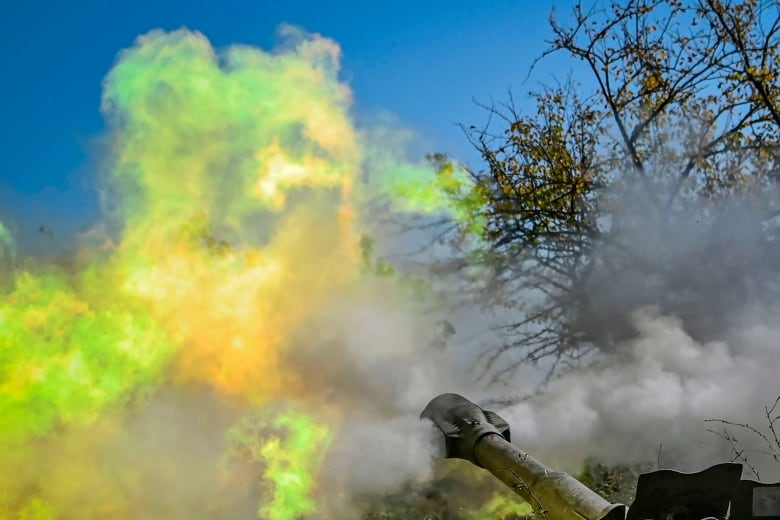 An Armenian soldier fires artillery during ongoing fighting between Armenian and Azerbaijani forces over the breakaway region of Nagorno-Karabakh on Sunday. (Aris Messinis/AFP via Getty Images)

Russia brokered two cease-fire agreements earlier this month, but both frayed immediately, with Armenian and Azerbaijani forces accusing each other of multiple violations. On Friday, U.S. Secretary of State Mike Pompeo hosted the Armenian and Azerbaijan foreign ministers for separate talks, but the fighting has continued unabated.

Azerbaijani President Ilham Aliyev has said that Armenian forces must withdraw from Nagorno-Karabakh to end the conflict and that Azerbaijan has the right to reclaim its territory by force after nearly three decades of international mediation yielded no progress.

In an interview released Saturday, Aliyev reiterated the calls for Armenia to pull out of the "occupied territories." Aliyev said that he wants the fighting to stop and the warring parties to "move to the negotiating table." He said he was "absolutely confident" there was a diplomatic way to resolve the conflict, but that "it depends on the will of the Armenian side."

"The Armenian prime minister... said that there is no diplomatic solution to the conflict," Aliyev said. 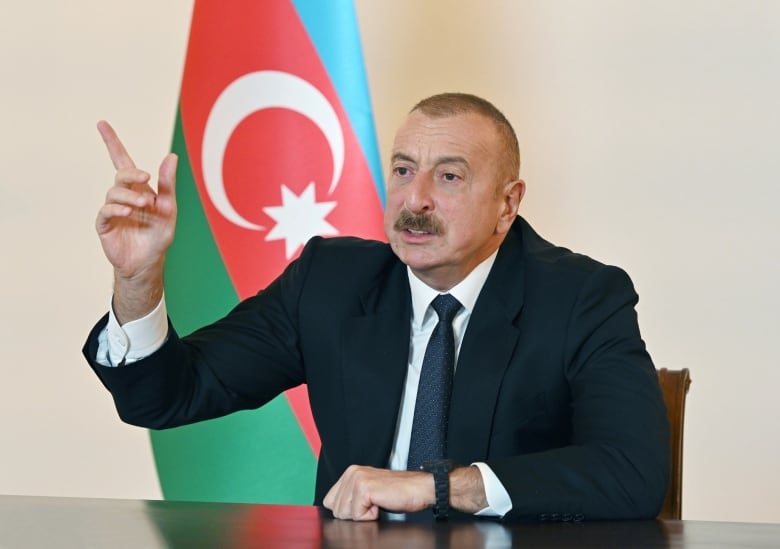 Azerbaijani President Ilham Aliyev has said that Armenian forces must withdraw from Nagorno-Karabakh to end the conflict and that Azerbaijan has the right to reclaim its territory by force after nearly three decades of international mediation yielded no progress. (Official website of President of Azerbaijan via Reuters)

Armenian Prime Minister Nikol Pashinian has repeatedly said that Armenia is ready for a peaceful resolution of the dispute and it was Azerbaijan that wouldn't agree to a compromise, Pashinian's spokeswoman, Mane Gevogryan, told the Interfax news agency Sunday.

"He said that when Armenia expresses readiness for a compromise, Azerbaijan demands more," Gevorgyan said.

The four weeks of fighting has prompted concerns of a wider conflict involving Turkey, which has thrown its weight behind Azerbaijan, and Russia, which has a security pact with Armenia.

Armenian officials accuse Turkey of being directly involved in the conflict and sending Syrian mercenaries to fight on Azerbaijan's side, claims both Turkey and Azerbaijan deny.

In the Saturday interview, Aliyev charged that Armenia was seeking Russia's military support in the conflict, and warned that it was "very dangerous." 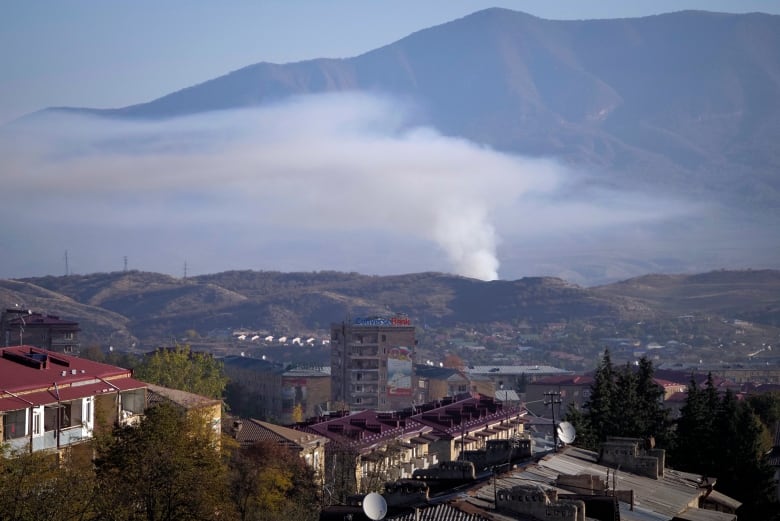 Smoke rises after shelling by Azerbaijan's artillery during a military conflict in Stepanakert, the separatist region of Nagorno-Karabakh, on Saturday. (The Associated Press)

The clashes have also worried Iran, which has borders with both Armenia and Azerbaijan. Iran has occasionally complained about stray mortar rounds and rockets that injured people and damaged buildings in rural areas near the borders.

Iran's Revolutionary Guard said Sunday it deployed units of its ground forces to the border near the area of the conflict, the country's state radio reported.

The report quoted Gen. Mohammad Pakpour, chief of the Guard's ground forces, as saying that deployment was taking place in recent days. Pakpour said Iran would not accept any action that "violates" the security and peace of Iranian people in the region.

Iran's state-run radio also reported Sunday on a limited drill by the army's ground forces near the country's northwestern borders. It did not elaborate about the location of the drill, but Turkey, Armenia and Azerbaijan have joint borders with Iran in the area.