Joe Biden's presidency will improve a battered Canada-U.S. relationship — but the change at the top won't be enough on its own to paper over some lingering bilateral concerns, experts say.

There will be a shift in both tone and policy in Washington D.C. as the more composed Biden replaces the mercurial Donald Trump in the country's highest office.

Trump, a nationalist and a critic of multilateralism, makes way for an institutionalist who has promised to restore American alliances.

Prime Minister Justin Trudeau's relationship with Trump soured after the reality TV star-turned-politician erupted at the G7 meeting in Charlevoix, Que.; Trump called the prime minister "very dishonest and weak" after he took some of Trudeau's trade-related comments as a personal slight. That episode all but ended hopes of a productive Ottawa-Washington relationship beyond the renegotiation of NAFTA.

Christopher Sands, director of the Wilson Center's Canada Institute, said there's optimism now that Biden will be more amenable to working with allies like Canada on pressing matters like the fight against climate change and COVID-19.

"Stylistically, he is going to be much more comfortable for Canadians. He's a much more traditional American politician, not just in terms of his interests, but his style. And that, I think, will be reassuring," he told CBC News.

In a deeply divided Washington, Sands said, there will be few opportunities for Biden to score big legislative wins — but he could rack up some early victories through a series of executive actions.

The 78-year-old Biden will also be more beholden to the younger, more progressive wing of the Democratic Party than presidents past, Sands said — which explains his anticipated early move to terminate the Keystone XL pipeline project by presidential decree without much discussion with Canada's representatives in D.C.

"In the future, Canada needs to have an ear to the ground of young Americans and try to anticipate the way issues will break."

Sands said that although Trudeau was the first world leader to call Biden after he was declared the victor in the 2020 race (notably, the Mexican president waited weeks to do so) and raised Keystone XL as a Canadian priority, Biden is pulling the plug on the project without discussing it in depth with Canadian representatives. 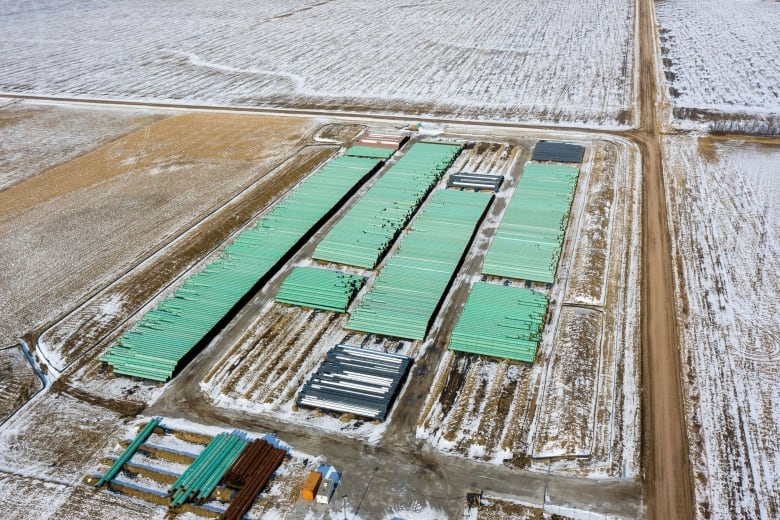 In this Dec. 18, 2020 photo, pipes to be used for the Keystone XL pipeline are stored in a field near Dorchester, Neb. Biden is expected to cancel the project on his first day in office. (Chris Machian/Omaha World-Herald via AP Photo)

Sands said the effect of Biden's first-day play is to make Trudeau "look like a chump."

"I think that was an unforced error. But my interpretation of the move is less that it's hostile and more that it's an illustration of weakness," he said.

"It's really hard to run Washington and I think that what Biden is doing is trying to keep his coalition together on the Democratic side. What's the one thing that unites all Democrats? They don't like Trump and since Trump let Keystone go ahead, they're going to go back to the Obama policy of stopping Keystone."

Beyond pipeline politics, there's an opportunity for Biden to build on a bilateral climate partnership launched by former president Barack Obama and Trudeau.

During Trudeau's state visit in March 2016, the two leaders agreed to take a continental approach to some environmental policies: a coordinated reduction in methane gas emissions from the oil and gas sector — by up to 45 per cent from 2012 levels by 2025 — greater collaboration on emission standards for cars and trucks and a pan-Arctic marine protection area, among other notable promises.

Trump derailed much of that work after he radically reshaped the U.S. Environmental Protection Agency by dismantling or weakening hundreds of Obama-era rules. 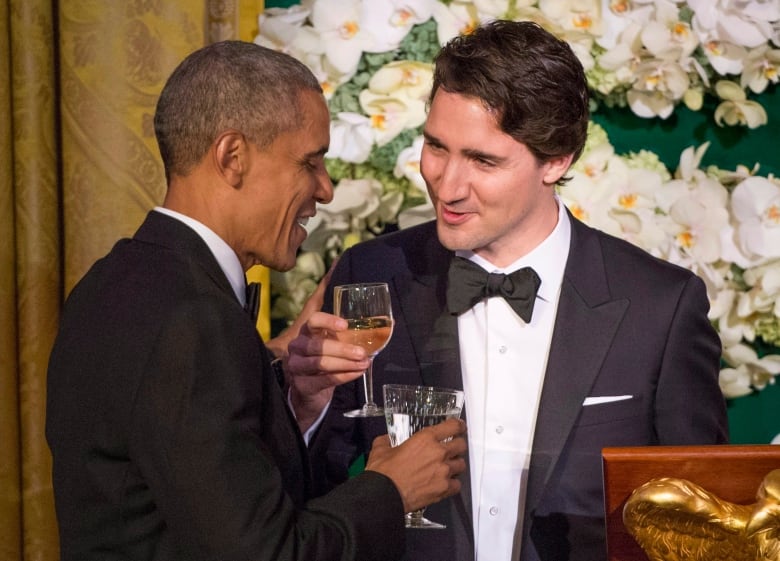 Paul Frazer, a former Canadian diplomat to the U.S., said Biden and Trudeau are very much aligned on the file, even as Canada pushes to secure more pipeline export capacity.

"The administration in Washington is led by a man with great depth and breadth in terms of politics, policy and experience. He's an adult, a mature adult, and he seems totally normal," Frazer said. "Just as you had 'no drama Obama,' you're going to have 'no drama Biden.'"

"That's one area where I'm particularly optimistic — a North American approach to the battle against climate change," he said, adding that the Obama-era policies could be renewed and the leaders could push ahead on green technology and climate-friendly infrastructure spending. "There are opportunities for Canada and the U.S. to work very, very well together."

On the other hand, he said, there's still a threat of 'Buy America' provisions emerging in any infrastructure spending plan, which would serve as a sign that Canada-U.S. trade tensions won't magically disappear along with Trump.

"There will be headaches," Frazer said.

Last year, for example, Biden proposed a massive $400 billion construction program, with contracts to be awarded only to U.S. companies. He vowed to make make Buy America "real."

"When we spend taxpayer money, we should buy American products and support American jobs," his platform document reads.

Canadian companies supply a vast range of equipment to public works construction projects in the U.S., for everything from school buildings to wastewater treatment facilities. A U.S.-centric approach could block Canadians from bidding on these lucrative contracts at a time when U.S. firms routinely win Canadian government procurement jobs.

"It definitely has legs because it's a big question mark right now," Frazer said. "We're not quite sure what the president meant when he said he'd strengthen Buy America and use it as a driver to create jobs at home. Canada has struggled with that over many years." 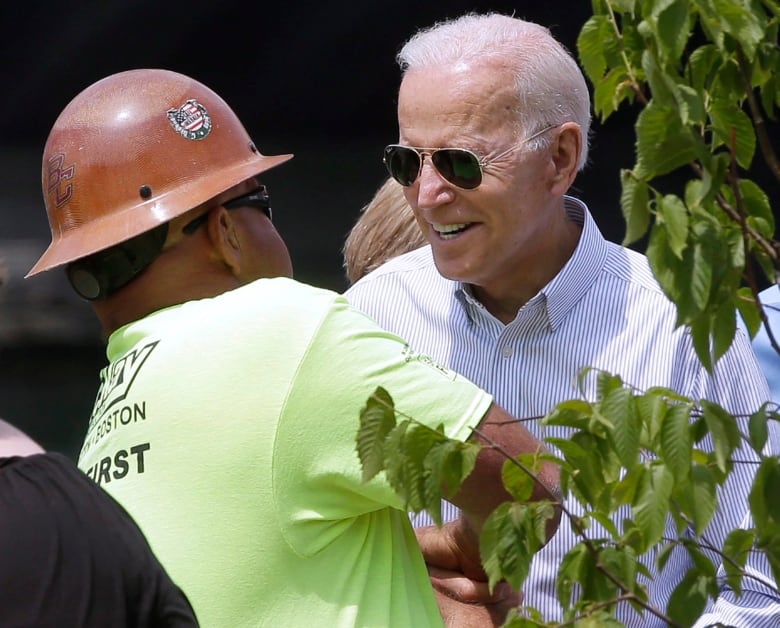 Joe Biden speaks to a construction worker at a park in Boston. Biden has promised to implement a 'Buy America' infrastructure plan, which could be an irritant in Canada-U.S. relations. (Steven Senne/AP Photo)

To fight back, Frazer said, Canada could bend the ear of members of the U.S. Congress and state governors about the importance of maintaining North American supply chains and market access. "It's not going to be a snap of the fingers. It's going to be an awful lot of work," he said.

Monique Smith, Ontario's former envoy in D.C., said she spent much of her five-year tenure in Washington trying to convince federal and state politicians that curbing trade and contracts with Canadians companies would hurt people in their own districts, given the degree to which the two economies are intertwined.

"When we would explain to them this is going to have a negative impact on Americans, they were surprised, shocked," she said. "Over various administrations, it's been a continuous game of whack-a-mole."

While there will be bilateral tensions over Keystone and Buy America, Sands said Biden could also create some "win-win" scenarios for Trudeau on two of Canada's most pressing issues: the imprisonment of Michael Kovrig and Michael Spavor in China and the stalled COVID-19 vaccination campaign.

If I were Justin Trudeau, I would be calling Biden and say, 'We need access to vaccines.' Biden could save Trudeau in a big way.- Christopher Sands

Sands said Biden could withdraw the Trump-era arrest warrant for Huawei executive Meng Wanzhou, who has been detained in Canada and is facing extradition, and negotiate the release of the imprisoned Canadians in return. Kovrig and Spavor have been held by the Chinese for 772 days.

"That would obliterate the Keystone XL news," Sands said. "I think most Canadians would say, 'That's a huge win for us.' Diplomatically, it's a great move, even if you really think Meng was guilty of violating U.S. sanctions on Iran and did all this nefarious stuff. It really is no loss to let her go."

While Canada's supply of the Pfizer-BioNTech vaccine will be limited for the next month — the company won't ship a single dose here next week — the Pfizer facility in Kalamazoo, Mich. will continue its work unaffected by the temporary production shutdowns at the company's European operations.

Pfizer's entire supply from that Michigan plant is destined for the U.S. market for now but, given Canadian concerns about supply, Biden could send an early signal that he's willing to help out a friend.

Biden may be able to broker a deal to release some of those shots to Canada as a gesture of goodwill, Sands said. Ontario Premier Doug Ford floated a similar idea Tuesday, asking Biden directly to "help out your neighbour." 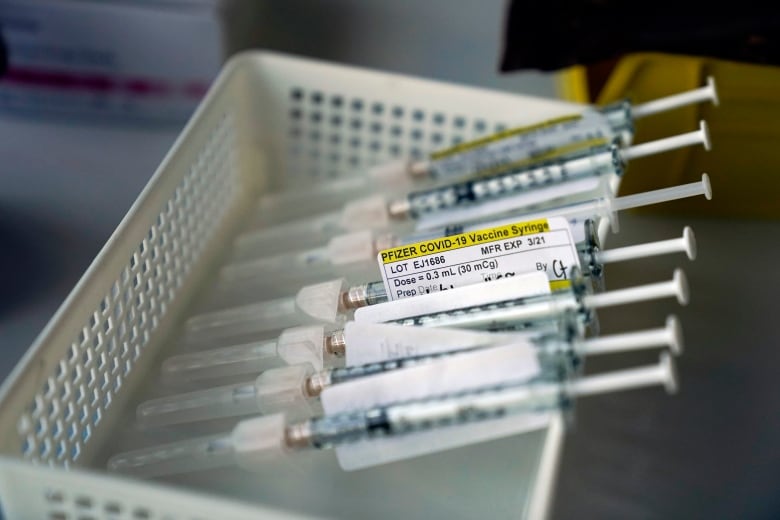 In this Jan. 7, 2021 file photo, syringes containing the Pfizer-BioNTech COVID-19 vaccine sit in a tray in a vaccination room at St. Joseph Hospital in Orange, Calif. (Jae C. Hong/AP Photo)

"If I were Justin Trudeau, I would be calling Biden and say, 'We need access to vaccines.' Biden could save Trudeau in a big way. It's a big ask, and maybe the U.S. only helps a little bit, but even a little bit is better than nothing," Sands said.

"I don't think it's a very good look for Trudeau that you've got people from Toronto and Montreal flying down to Florida because they'll give you the vaccine there."