Bolivians return to polls a year after tumultuous election, ouster of Evo Morales

For Bolivia, the pandemic has been just part of the turmoil over the past 12 months.

A disputed election. Deadly riots. The toppling of Bolivia's first Indigenous president in what his backers considered a coup. The rise to power of a relatively obscure senator — and her failure to consolidate her presidency.

Now a presidential election on Sunday gives Bolivians at least a chance for a political reset as they struggle with the dramatic costs of the COVID-19 pandemic.

On a per-capita basis, few countries have been hit harder than the impoverished, landlocked nation: Nearly 8,400 of its 11.6 million people have died of COVID-19.

The election will occur with physical distancing required between masked voters — at least officially, if not in practice. 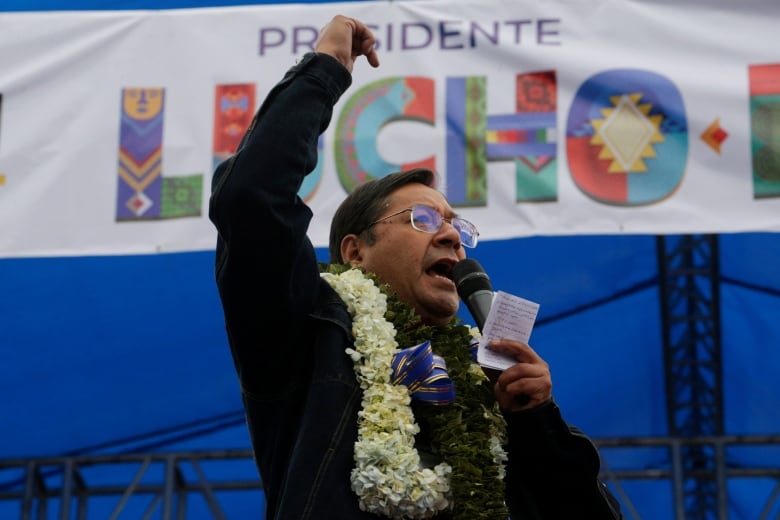 Presidential candidate Luis Arce of the Movement Toward Socialism party (MAS) speaks during a rally in El Alto, on the outskirts of La Paz, on Oct. 14. Arce previously served as economy minister in Morales's government. (David Mercado/Reuters)

Overshadowing the vote is the absence of Morales, who led Bolivia from 2006 until 2019 and was a key figure in the bloc of leftist leaders who held power across much of South America.

Morales, now exiled in Argentina, was barred from running for the presidency or even the Senate by electoral authorities following his ouster, and he chose Arce as his stand-in for the Movement Toward Socialism party.

A boyhood llama herder who became prominent leading a coca grower's union, Morales had been immensely popular while overseeing an export-led economic surge that reduced poverty during most of his term. But support was eroding due to his reluctance to leave power, increasing authoritarian impulses, a series of corruption scandals and conservatives' irritation over his promotion of Indigenous culture and "earth mother" religious observances.

He shrugged aside a public vote in favour of term limits and ran for election again in October 2019, claiming he'd won at least a narrow first-round victory. But a lengthy pause in updated returns fed suspicions of fraud, and nationwide protests broke out. At least 36 died in those protests or others later.

When police and military leaders suggested he leave, Morales resigned — along with most others in the chain of succession — and fled the country. Conservative Sen. Jeanine Añez, perhaps fifth in line, proclaimed herself president and was accepted by the courts.

Her administration, despite lacking a majority in congress, set about trying to prosecute Morales and key aides while undoing his policies, helping prompt more unrest and polarization.

She dropped an attempt to win election this year while trailing badly in polls. The government twice delayed the vote, first set for May 3 and then Sept. 6.

Most polls have shown Arce with a lead, though likely not enough to avoid a November runoff, which will occur if none of the seven candidates gets at least 40 per cent of the vote, in addition to a 10 percentage point lead over the closest rival.

There's a strong chance the next president will struggle with a divided congress — and perhaps worse, an opposition that refuses to recognize defeat.

"No matter who wins, Bolivia will be extremely difficult to govern," said Michael Shifter, president of the Inter-American Dialogue, an international affairs think-tank based in Washington, D.C.

Mesa, 67, was vice-president in 2003 when national protests led in part by Morales forced the resignation of then-president Gonzalo Sánchez de Lozada. Continuing unrest led Mesa himself to step down in 2005 and set up the elections that put Morales in power. 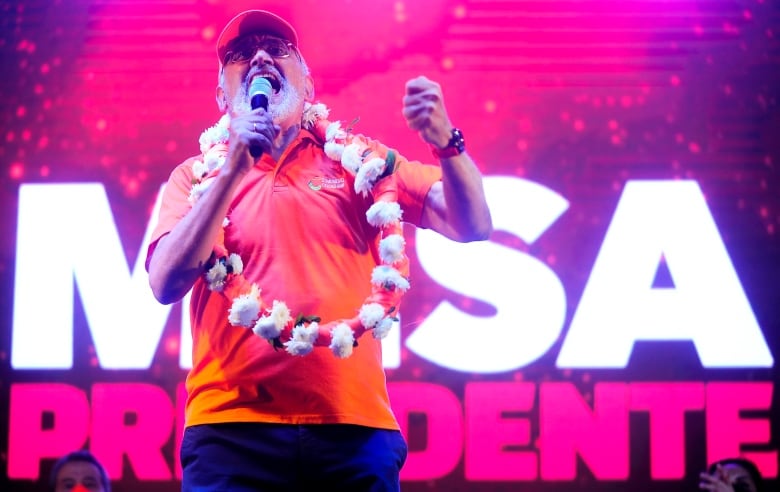 Bolivian presidential candidate Carlos Mesa delivers a speech at a rally in Santa Cruz on Oct. 13. Mesa has become the preferred candidate on the right after the unpopular interim president announced she would not run in Sunday's election. (Enrique Canedo/AFP/Getty Images)

"These 14 years have been the worst inheritance in our history," he said Wednesday as he closed his campaign.

Mesa — co-author of a leading history of Bolivia — tends to come off as a somewhat dull, uncharismatic intellectual, although during this campaign season, he has occasionally traded a suit coat for jeans and shirtsleeves and even danced to cumbia music.

"He is a centrist committed to democratic values, who understands the importance of reconciliation as a condition for advancement," Shifter said.

Arce, 57, is a middle-class economist with studies in England who took advantage of a boom in raw materials prices to help Morales's socialist administration send Bolivia's economy booming — an advance he also credits to reduced inequality and state investment.

His backing depends heavily on working-class and rural voters who remain loyal to Morales.

"We will recover democracy, reconstruct the economy and return stability to Bolivia," Arce has vowed repeatedly.