Deforestation in Brazil's Amazon rainforest rose to its highest in over a decade this year, government data on Monday showed, confirming a sharp increase under the leadership of right-wing President Jair Bolsonaro.

The data from Brazil's INPE space research agency, which showed deforestation soaring 29.5 per cent to 9,762 square kilometres for the 12 months through July 2019, sparked an uncharacteristic admission by the government that something needed to be done to stem the tide.

It was the worst level of deforestation since 2008, heaping further pressure on the environmental policy of Bolsonaro who favours developing the Amazon region economically.

The Amazon is the world's largest tropical rainforest and is considered key to the fight against climate change because of the vast amounts of carbon dioxide it absorbs.

Risks to the forest drew global concern in August when fires raged through the Amazon, drawing sharp criticism from France's President Emmanuel Macron.

At a briefing to discuss the numbers, Environment Minister Ricardo Salles said the rise in deforestation showed the need for a new strategy to combat the illegal logging, mining and land grabbing which he said were to blame.

Environmentalists and nongovernmental organizations placed the blame squarely on the government, saying that Bolsonaro's strong pro-development rhetoric and policies to weaken environmental enforcement are behind the rise in illegal activity.

"The Bolsonaro government is responsible for every inch of forest destroyed. This government today is the worst enemy of the Amazon," said Marcio Astrini, public policy coordinator for Greenpeace, in a statement. 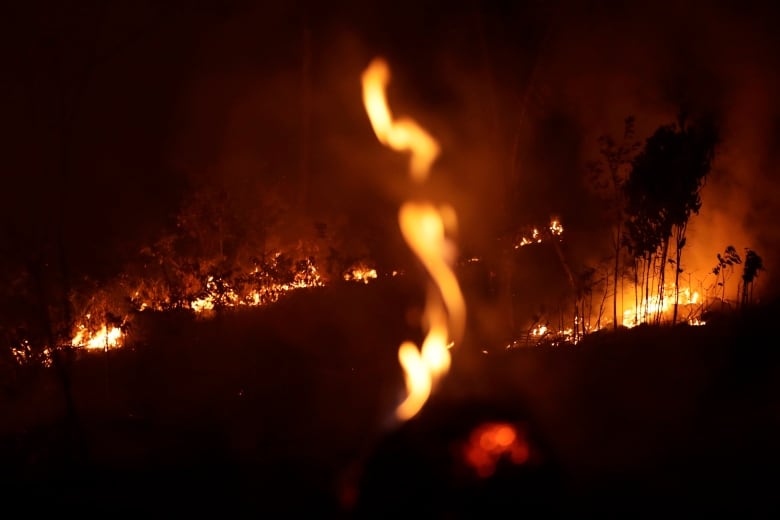 In this Aug. 25, 2019 file photo, a fire burns in highway margins in the city of Porto Velho, Rondonia state, part of Brazil's Amazon, Sunday, Aug. 25, 2019. The vast state of Amazonas has seen one of the sharpest increases in fires this year, with over 6,600 fires recorded in August, a 157% jump compared to the same month a year ago. (Eraldo Peres/Associated Press)

Bolsonaro's office directed Reuters to remarks made by Salles and another official and did not comment further on the issue.

Brazil's Climate Observatory, a network of nongovernmental organizations, said the 2019 increase in deforestation was the fastest in percentage terms since the 1990s and the third fastest of all-time.

In response to the numbers, Salles vowed to roll out a series of measures to counter the rising deforestation, including stepping up enforcement efforts assisted by high-resolution satellite imaging.

The minister said he would meet governors of Amazon states on Wednesday to discuss tactics to counter deforestation.

All options are on the table, according to Salles, including mobilizing the military for use in environmental enforcement operations.

Salles' recognition that deforestation is indeed on the rise comes after months of the government casting doubt on preliminary monthly data showing destruction was skyrocketing. 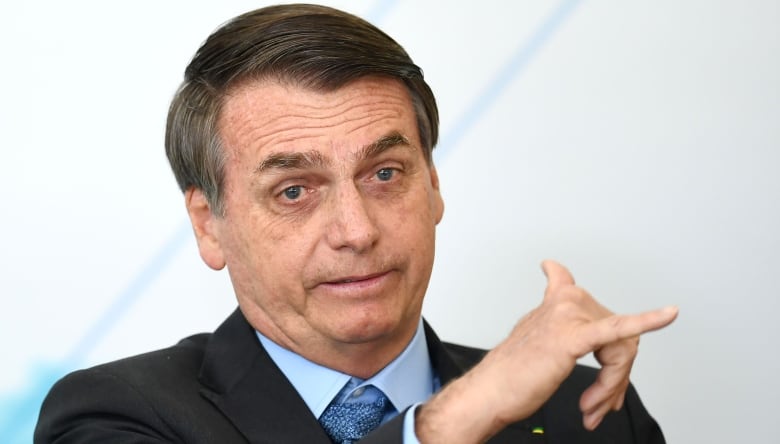 At multiple press briefings earlier this year, Salles alleged the monthly data was unreliable and contained inconsistencies. He had urged journalists not to report the monthly figures and wait for the annual data, announced Monday.

Bolsonaro had accused the INPE space research agency of lying about the monthly data. In a high-profile dispute, then-INPE chief Ricardo Galvao stood by the data and called Bolsonaro "a joke of a 14-year-old boy that is not suitable for a president of Brazil." Galvao was later fired.

The annual figure accounts for seven months under Bolsonaro, but also measures five months under the previous government.

It also does not account for destruction after July. Preliminary data for August to October shows deforestation more than doubled compared to the same period a year-prior to 3,704 square kilometres.

NGOs say they fear that protections could be weakened further as the government considers allowing commercial agriculture on native reserves, expanding wildcat mining and allowing for illegally occupied land to be "regularized."

Beef prices are also at record highs in Brazil, leading some environmentalists to fear it could fuel land grabbing for cattle ranching — one of the biggest drivers of deforestation.

"The coming years could be even worse," said Carlos Rittl, executive-secretary for Climate Observatory.

Joey Graceffa’s ‘Escape The Night’ Board Game Kickstarter Gets Fully Funded In 3 Hours, Raising $120,000 And Counting

8 Blake Butler Makes Peace With Darkness in His New Novel,...

10 Microsoft Teams is getting AI-powered features Together...