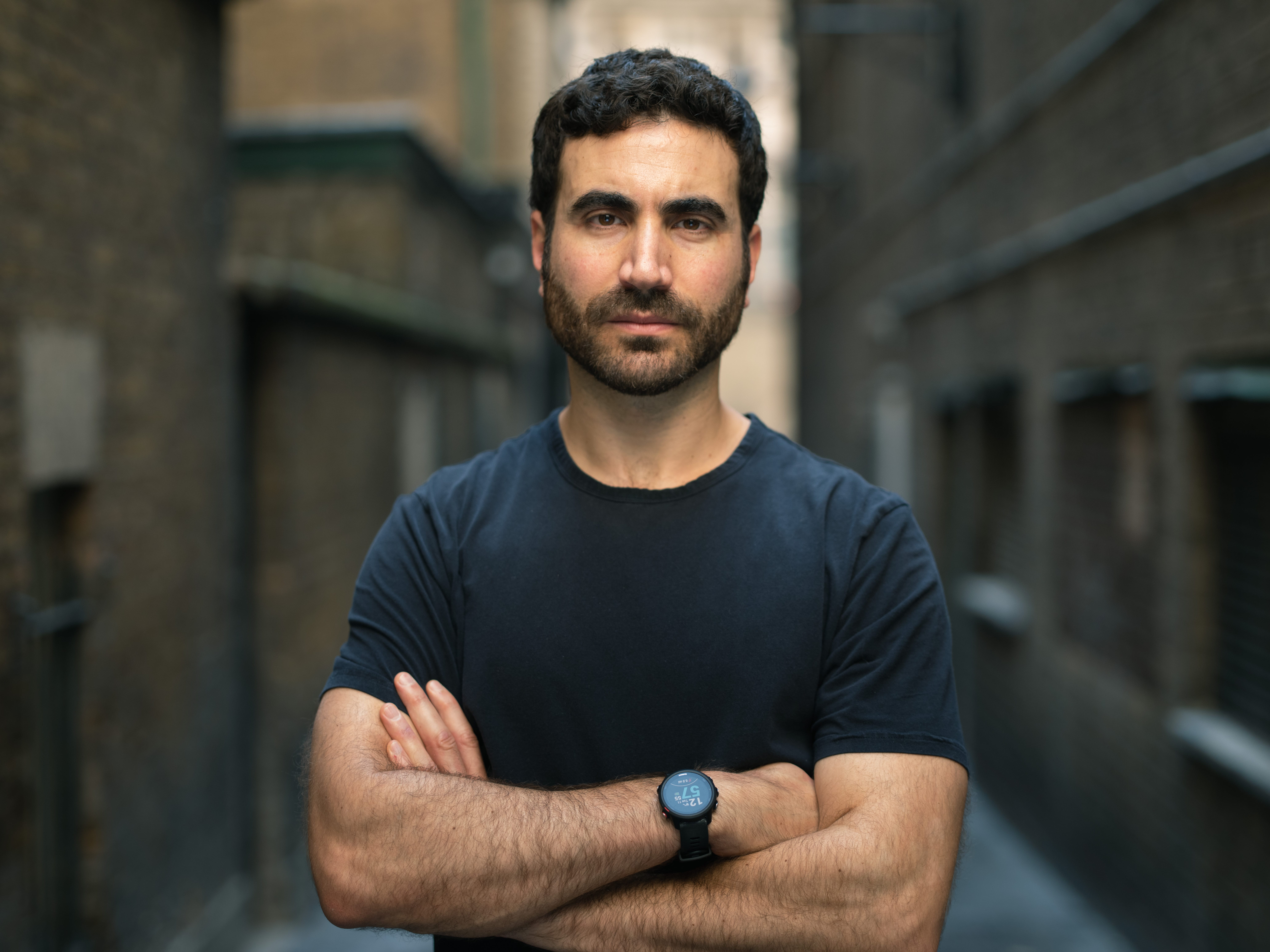 For American audiences just starting to pay attention, Brett Goldstein is most likely familiar as Roy, the gruff soccer midfielder harboring a secret crush in Apple TV+’s recent hit comedy, Ted Lasso (on which he also serves as a writer and executive story editor).

Or if they’re into reading credits, they might notice that he’s the co-creator of the new AMC anthology series, Soulmates, a light sci-fi about love and relationships.

Nerds and comedy obsessives might instead know him best for his work as the creator, co-writer, and star of the 2015 British cult comedy superhero flick SuperBob, in which he plays a former postman who gains superpowers in a freak accident… but really just wants to declare his love for and run away with Dorris (Natalia Tena, aka the wildling Osha in Game of Thrones).

Or those same comedy nerds might well recognize him from Ricky Gervais’s show Derek, in which he plays Tom, a frustrated member of the Merchant Navy who is in love with a woman named Hannah…

Whether it’s by coincidence, the eventual typecasting that sets in after a few successful roles, or his own interests, the vexing and elusive nature of love—whether it’s earning it or keeping it— has served as the central centripetal force around which Goldstein’s disparate work over the last half-decade has orbited.

It’s somewhat unusual, considering that he began his career as a stand-up comedian and wrote for Catherine Tate’s angry grandma comedy Nan, but he doesn’t at all seem to mind the career evolution. And when you speak to Goldstein about Soulmates in particular, it becomes clear that he spends a lot of time thinking about the matter, though some of those deeper musings are less romantic than cautionary tales.

The AMC series, which is currently airing on Monday nights and has already been renewed for a second season, takes place in a near-future in which a genetic test can actually identify one’s soul mate, a world-changing breakthrough that unleashes a kind of emotional and interpersonal dystopia, like Hallmark Original Movies passed through a Black Monday filter.

It makes for a very good conversation—though sometimes, as we discuss with Goldstein during a wide-ranging interview, it’s better to watch alone.

Observer: There’s a later episode of Ted Lasso in which Richmond [the fictional team for which Goldstein’s character Roy plays] beats Everton and everyone acts like they just won the Champions League. Maybe it’s my bias as a Liverpool supporter, but Everton isn’t that impressive! Is there any club you love in particular? I assume you have one, since you’re British.
Brett Goldstein: My dad is a football hooligan. He’s a hardcore fan who like planned our birth around games so that if we’ve been born on that day of a match, he wouldn’t have been there. I grew up in a serious football house. He loves Tottenham. If I dated someone who was not a Tottenham supporter, he’d say well that’s no option.

To be fair, I’m a Mets fan and would never date a Yankees fan.
It’s a religion, particularly in England, it’s madness. You’re indoctrinated from birth. There are people with babies in T-shirts and you think, That’s it, they’re fucked. I’ve been in and around football all my life, but I’ve never been good at it, which I think my dad was very disappointed by. But now finally, I get to play a footballer. I think he’s finally proud—I’ve never seen him so excited about any work I’ve ever done.

I’ve been a Mets fan my whole life, I was born into it. But they usually suck, so I’m also stuck with it.
If you’re supporting the team that always wins, that must make it pretty boring, though.

It could mean more individual streams, though. So how did this show happen?
Will Bridges, who is the co-creator with me, when we were working on SuperBob, we were just talking about how we like to write about relationships. And we were talking about what love is. We were in very different stages; he was married and was about to have his first child, and I was kind of dating the wrong people.

We were talking about how the very sort of notion of soulmates as a romantic ideal has existed for thousands of years, but what does it actually mean? Is his wife his soulmate? Was the person I was with my soulmate? And the more we talked about it, we were like, what if you could prove it? What if science found a way that you could prove it? And then once we had that idea, we made a short film with me and Laura Haddock, who is also in SuperBob. And then three years later, AMC saw this short, and they said, “Do you want to work with us?” And we were like, “Yes, please.”

We eventually made it an anthology because every single person has a different story or a different version of what they think love is.

Three years later is a pretty decent amount of time to go from short to developing a series. Did your perception of what love is change in that time?
I think in every stage in your life, your view on what love means and what it is changes. I mean, you tell me, but I definitely feel differently about it than I did three years ago. And even the idea of what a soulmate is, if such a thing were to exist, I think that what I think a soulmate is has probably changed now as well. And that also means it will probably change again.

Do you think that? Do you feel differently now about relationships and what love is than you did five years ago?

Oh, definitely. I had a big break-up and then met and married my now-wife in that time period. I went from 29 to 34 years old. Still dumb, but maybe not as dumb.
I end up talking with people about relationships very quickly, because I find them interesting, and everyone’s got a take on it. For me, part of the job is even that, if you don’t agree with someone, then you’ve got to find your way into understanding them.

I really don’t want to sound pretentious, I get nervous to talk about it because I don’t want to sound like a dickhead, but you gotta have empathy. In Episode 6, the idea is what if your soulmate is a bad person? What does that mean? You read about a terrible man having done terrible things and his wife staying with him. I didn’t know what that’s like, from her point of view. And if there’s a version of events where they’re soulmates. What does that mean?

I’m not sure. I don’t think I would because I don’t really like being told what to do, and it would mean I’d probably have to go be with someone. And now that I’m married, I don’t think I would, because several episodes show how it’s a pretty easy way to fuck up a good relationship.
Do you think your wife is your soulmate?

Yeah, I do, and not just because she’s in the other room and can possibly hear me speaking to you. But still, certain episodes reaffirm that it isn’t worth taking the test sometimes.
In talking about the show, you realize stuff that you maybe hadn’t thought of in the making of it.  I think as much as I think there’s definitely dark elements in the show, I also think it’s sort of positive in that it’s kind of pro-relationships. It says that the history and the time you spend with the person matters and the things that you build together matter. I think that’s actually a nice part of the show.

And yet, the episode you wrote of Ted Lasso is all about Ted’s divorce! As a story editor on the series, did you choose to write that one? I’m sensing a pattern.
[Laughs.] Basically, we always knew at some point that the wife was going to come. And I had an idea for it and it was based on a moment that happened to Tottenham in real life.

[Editor’s note: Ted’s wife and kids fly to England and they wind up breaking up. There’s a bittersweet moment after they make that decision in which his wife and children come down to the field—or, to Brits, the pitch—at the end of the match to greet him.]

It was with Lucas Moura, the first time he scored a hat trick for Tottenham. He stood at the end of the pitch. He was facing the crowd and he was kind of posing—it looked weird. The crowd was cheering him and it seemed a bit arrogant, like he was just standing there posing. And then suddenly the crowd kind of parted and there was his wife with his baby.

She handed him the baby and he took the baby onto the pitch, and put the baby down. He put a ball in front of the baby and the crowd cheered as the baby kicked the ball. It was just a really beautiful, really moving thing. I saw a story on it, and Lucas said that he hadn’t quite fit in yet with the team. This moment of him scoring a hat trick and being like, he’s here now and he’s home and this matters, it is part of something, and he’s bringing his wife and child into it.

This interview has been edited for length and clarity.

2 ‘Below Deck: Med’ Star Hannah Ferrier Is Engaged! See Her...

4 People Are Sharing Hilarious Old Photos Of Themselves...

6 Should ABC's Big Sky Be A Limited Series?

7 10 Things You Need To Know About Tayshia Adams The New...