“Statewide, I don’t think we’ve ever seen hospital admissions increase like we did just over the past 24 hours,” said California Director of Health and Human Services Dr. Mark Ghaly. “I hope but don’t expect that it’s the highest we’ll ever have.”

California saw 15,329 new daily Covid-19 cases on Tuesday. That’s barely down from an all-time high of 15,442 on Saturday. “We know that often this number [early in the week] is usually lower because of the weekend, but it’s still nearly our highest daily case number,” observed Ghaly. He noted the 7-day average is over 12,500 daily cases.

But the hospitalization data are even more disturbing. The daily number of hospitalizations due to the virus in California has increased 81% over last 14 days to 6,641.

Ghaly reminded that today’s hospitalizations are the result of the number of infections seen two weeks prior. So Tuesday’s patients are based on a case number of 7,000 that we saw on November 10th. Tuesday’s daily new case count was 15,329, more than double that from two weeks ago. “We’re concerned,” said Ghaly about what lies ahead.

According to Governor Gavin Newsom 44,369 of the state’s 73,867 hospital beds were occupied on Monday — see chart below. That seems like a good cushion, but even just a week of new admissions in the range of 1,800 is another 12,600 beds occupied. Two weeks at that rate is another 25,200 beds taken up. Adding that to the Monday’s total would have about 70,000 of the state’s 73,867 beds full. And those are just Covid-19 cases. That number does not account for the state’s usual daily demand due to other maladies. 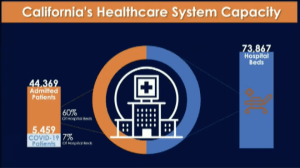 Now, provision has been made for additional beds to be surged should the need arise. But according to Newsom last week, that number was just a little over a total of 1,800. That’s currently enough for just one day’s increase in Covid-19 patients.

ICU admissions, which are a subset of hospitalizations, have seen a 57% increase over the past 14 days, said Ghaly. State ICU units “already being pressed to a significant degree,” he said.

6 Easy Ways to Decorate Your Window

2 How Filming A Cringey MTV Show With My Ex Helped Me...

5 Hyundai rolls out adorable customer service robot for its...

9 Apple shuffles hardware execs to make room for a...