A U.S. federal prosecutor says he plans to ask for at least a year in prison for California Rep. Duncan Hunter, who pleaded guilty Tuesday to misusing $150,000 US in campaign funds for his own personal expenses.

The six-term Republican, who had fought the allegations for more than a year, showed no emotion in the courtroom and only spoke in affirming his guilty plea.

Hunter, an early supporter of President Donald Trump, said in a TV interview that aired Monday that he is prepared to go to jail.

Outside the federal courthouse in San Diego, he offered a brief statement, saying, "I failed to monitor and account for my campaign spending. I made mistakes and that's what today was all about." He said he would discuss his future at a later time.

In his plea deal, Hunter said he and his wife dipped into the election funds between 2010 and 2016 more than 30 times and tried to hide it by falsely reporting the expenses — from their daughter's birthday party at the famed Hotel Del Coronado to a French dinner with friends in Washington — were campaign related.

The former combat Marine who served in Iraq and Afghanistan and was first elected in 2008 declined to say when he would leave office. He left the courthouse accompanied by his father, former congressman Duncan Hunter Sr.

Prosecutor Phil Halpern noted Hunter's honourable service in the military and his place in a family that has been a local political dynasty. But he had a sharp rebuke for the congressman's claim that the investigation was a politically motivated "witch hunt."

"No figure, regardless of what office they occupy, should be allowed in this country to cry witch-hunt or fake news and attempt to deflect their criminal wrongdoings," he said.

Halpern vowed to seek a prison term for Hunter of at least a year, although the plea agreement calls for the congressman to serve a maximum of five years. A judge will determine his ultimate sentence.

Hunter left the courthouse to jeers from protesters yelling "Lock him up."

The change in plea marks the second time this year a Republican congressman who was re-elected while indicted has later pleaded guilty to federal charges.

Hunter, 42, told San Diego TV station KUSI a trial would be tough on his three children.

His wife Margaret Hunter also was charged in the case and in June accepted a plea deal that called for her to testify against her husband. She faces up to five years in prison. 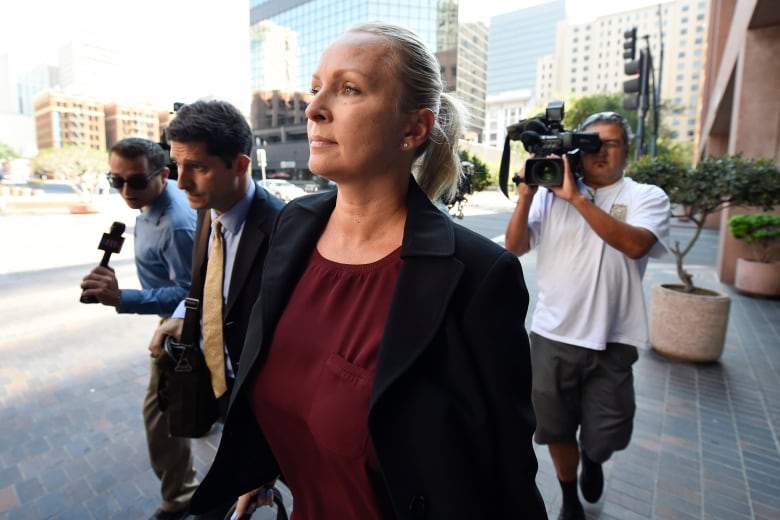 Margaret Hunter is shown earlier this year after a court appearance. She faces up to five years in prison as part of the scheme. (Dennis Poroy/Associated Press)

The couple could have faced decades in prison before the plea deals.

Federal prosecutors said the couple spent more than $250,000 US in campaign money for golf outings, family vacations to Italy and Hawaii, tequila shots and airline tickets for their pet rabbit.

Prosecutors also revealed the congressman spent some of the money on romantic relationships with lobbyists and congressional aides.

Hunter's departure will mark the end of a political dynasty in Southern California's most Republican district. He was elected in 2008 after his father represented the district for 28 years.

In October, former four-term Republican Chris Collins of New York pleaded guilty in an insider trading case, a day after he resigned from Congress. He faces a maximum sentence of about four years in prison.

Collins and Hunter were the first sitting members of Congress to endorse Donald Trump for president, doing so on the same day in February 2016.

Alicia Keys Opens 2020 Grammys with Kobe Bryant Tribute: He 'Would Want Us to Keep the Vibrations High'

2 17 Iconic Pics Of Kobe Bryant And His Daughter To...

4 Impeachment outcome is a foregone conclusion, but how...

8 Kobe Bryant and Vanessa Bryant through the years

10 The Famous “DQ Dad” Reunites With His Sons At The Same...