The measures were a response to U.S. legislation passed last week supporting the protests which have rocked the Asian financial hub for six months. It said it had suspended taking requests for U.S. military visits indefinitely, and warned of further action to come.

"We urge the U.S. to correct the mistakes and stop interfering in our internal affairs. China will take further steps if necessary to uphold Hong Kong's stability and prosperity and China's sovereignty," Chinese Foreign Ministry spokesperson Hua Chunying said at a news briefing in Beijing.

There are fears that the dispute over Hong Kong could impact efforts by Beijing and Washington to reach a preliminary deal to de-escalate a prolonged trade war between the world's two largest economies. 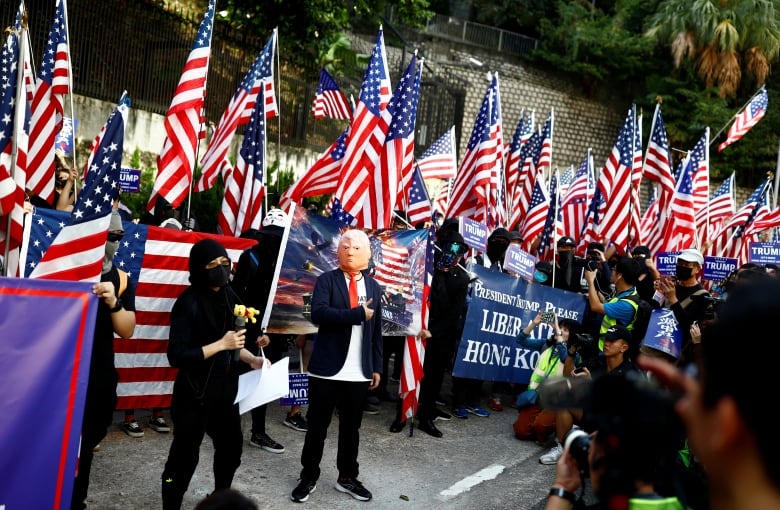 A protester wearing a mask depicting U.S. President Donald Trump gestures during a 'march of gratitude" near the U.S. Consulate in Hong Kong on Sunday. (Thomas Peter/Reuters)

In more normal times, several U.S. naval ships visit Hong Kong annually, a rest-and-recreation tradition that dates back to the pre-1997 colonial era and one that Beijing allowed to continue after the handover from British to Chinese rule.

"We have a long track record of successful port visits to Hong Kong, and we expect that to continue," said a U.S. State Department official, who spoke on condition of anonymity.

"False accusations of foreign interference" against the U.S. NGOs "are intended to distract from the legitimate concerns of Hong Kongers," the official said.

Pentagon spokesperson Lt.-Col. Dave Eastburn said port visits to Hong Kong and elsewhere around the world served as a useful program to "provide liberty for our sailors and expand people-to-people ties with our hosts."

"With regard to the ongoing protests, we condemn the unjustified use of force and urge all sides to refrain from violence and engage in constructive dialogue," he said in a statement.

A U.S. defence official, speaking on condition of anonymity, said China's move would not have an impact on U.S. military operations.

Visits have at times been refused amid broader tensions and two U.S. ships were denied access in August. 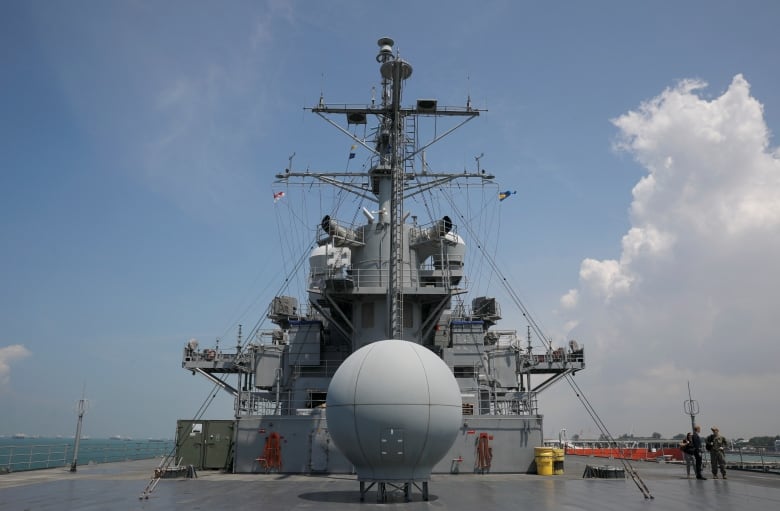 The USS Blue Ridge, flagship of the U.S. navy's Seventh Fleet, at Changi Naval Base in Singapore, on May 9. (Edgar Su/Reuters)

The USS Blue Ridge, the command ship of the Japan-based Seventh Fleet, stopped in Hong Kong in April — the last ship to visit before mass protests broke out in June.

Foreign NGOs are already heavily restricted in China, and have previously received sharp rebukes for reporting on rights issues in the country, including the mass detention of Uighur Muslims in Xinjiang.

"They shoulder some responsibility for the chaos in Hong Kong and they should be sanctioned and pay the price," Hua said.

Ghostbuster: Afterlife vs. Jurassic World 3: Which Original Cast Reunion Will Have The Bigger Payoff?

2 Arrow Series Finale: Felicity and Oliver Reunite in the...

5 'There haven't been any duels lately': Unspooling the...

7 How To Tell If You Have An Anxious Attachment Style &...

8 Today's Love Horoscopes For All Zodiac Signs On...