Chinese leader Xi Jinping has made a rare visit to Tibet as authorities tighten controls over the Himalayan region's traditional Buddhist culture, accompanied by an accelerated drive for economic development and modernized infrastructure.

State media reported Friday that Xi visited sites in the capital, Lhasa, including the Drepung Monastery, Barkhor Street and the public square at the base of the Potala Palace that was home to the Dalai Lamas, Tibet's traditional spiritual and temporal leaders.

Xi's visit was previously unannounced and it wasn't clear whether he had already returned to Beijing.

China has in recent years stepped up controls over Buddhist monasteries and expanded education in the Chinese rather than Tibetan language.

Critics of such policies are routinely detained and can receive long prison terms, especially if they have been convicted of association with the 86-year-old Dalai Lama, who has lived in exile in India since fleeing Tibet during an abortive uprising against Chinese rule in 1959. 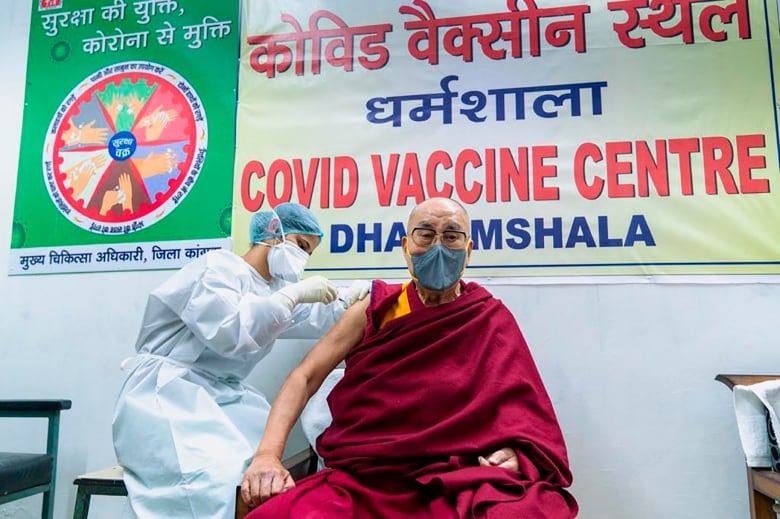 The Dalai Lama is seen receiving a COVID-19 vaccine shot in Dharmsala, India, on March 6. (Office of His Holiness the Dalai Lama/The Associated Press)

China doesn't recognize the self-declared Tibetan government-in-exile based in the hillside town of Dharmsala, and accuses the Dalai Lama of seeking to separate Tibet from China.

Meanwhile, domestic tourism has expanded massively in the region during Xi's nine years in office and new airports, rail lines and highways have been constructed.

China's official Xinhua News Agency said that while in Lhasa on Thursday, Xi sought to "learn about the work on ethnic and religious affairs, the conservation of the ancient city, as well as the inheritance and protection of Tibetan culture."

A day earlier, he visited the city of city of Nyingchi to inspect ecological preservation work on the basin of the Yarlung Zangbo River, the upper course of the Brahmaputra, on which China is building a controversial dam.

He also visited a bridge and inspected a project to build a railway from southwestern China's Sichuan province to Tibet before riding Tibet's first electrified rail line from Nyingchi to Lhasa, which went into service last month. 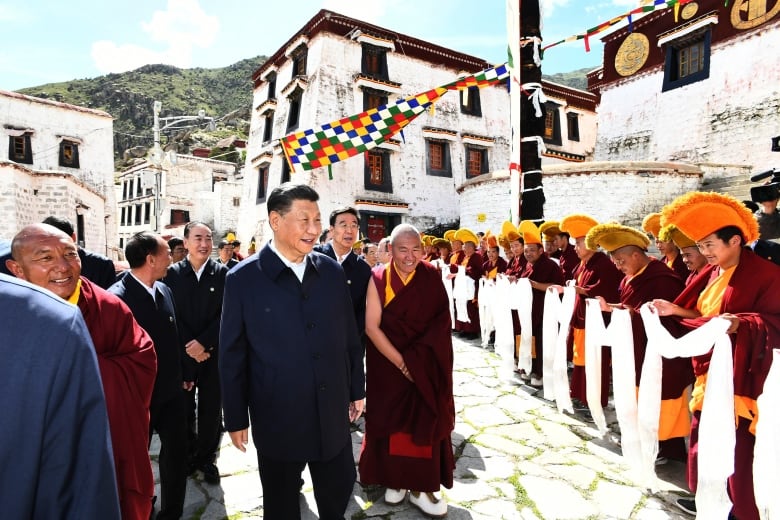 Xi's visit may be timed to coincide with the 70th anniversary of the 17 Point Agreement, which firmly established Chinese control over Tibet — which many Tibetans say had been effectively independent for most of its history.

The Dalai Lama says he was forced into signing the document and has since repudiated it.

It also comes amid deteriorating relations between China and India, which share a lengthy but disputed border with Tibet.

That appears to have prompted Indian Prime Minister Narendra Modi to wish the Dalai Lama well on his birthday this month on Twitter and said he also spoke to him by phone.

Spoke on phone to His Holiness the @DalaiLama to convey greetings on his 86th birthday. We wish him a long and healthy life.—@narendramodi

That was the first time Modi has publicly confirmed speaking with the Dalai Lama since becoming prime minister in 2014.

In a statement, the advocacy group International Campaign for Tibet called Xi's visit "an indication of how high Tibet continues to figure in Chinese policy considerations."

The way in which the visit was organized and the "complete absence of any immediate state media coverage of the visit indicate that Tibet continues to be a sensitive issue and that the Chinese authorities do not have confidence in their legitimacy among the Tibetan people," the group based in Washington, D.C., said.

The RetroBeat: How Pokémon is celebrating its...