Hundreds of members of China's People's Armed Police (PAP) could be seen conducting exercises on Thursday at a sports stadium in Shenzhen, as the U.S. State Department expressed concern that they could be deployed across the border in Hong Kong to break up protests wracking the city.

But Western and Asian diplomats in Hong Kong said Beijing has little appetite for rolling the PAP or the People's Liberation Army onto Hong Kong's streets.

On Thursday men in fatigues could be seen in a stadium and shouts and whistles could be heard by a Reuters journalist. The stadium is next to a retail complex and shoppers were milling around the area, although the entrances to the stadium were closed.

"This is the first time I've seen such a large-scale meeting," said Yang Ying, a receptionist at a wellness centre inside the stadium's retail complex.

"There have been exercises in the past, but usually they involve traffic police," she added. "Our friends, social media all say it's because of Hong Kong." 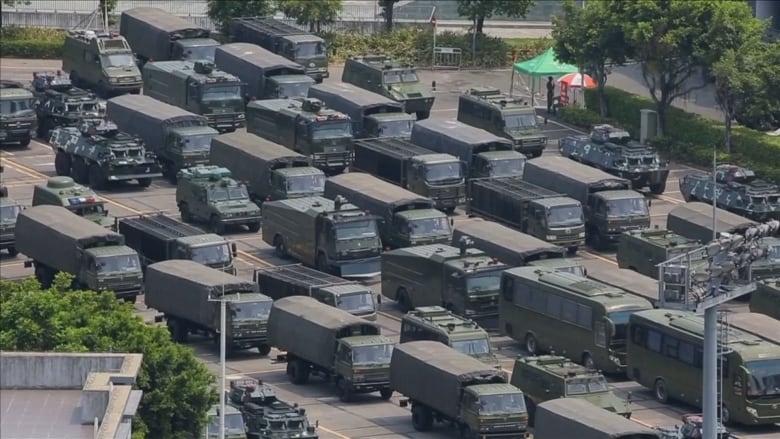 Dozens of armoured paramilitary vehicles are seen parked outside of the Shenzhen Bay Sports Centre on Thursday as hundreds of members of China's People's Armed Police (PAP) were seen conducting exercises. (Reuters)

Ten weeks of increasingly violent confrontations between police and protesters have plunged Hong Kong into its worst crisis since it reverted from British to Chinese rule in 1997. The protests represent one of the biggest challenges for Chinese President Xi Jinping since he came to power in 2012.

On Wednesday the U.S. State Department said it was deeply concerned about reports that Chinese police forces were gathering near the border with Hong Kong and urged the city's government to respect freedom of speech.

Troops marched in and out of the Shenzhen stadium, some in fatigues, some in black T-shirts and camouflage trousers. The floor of an indoor area visible through an open gate was lined with mats and rucksacks.

Chinese state media have made several mentions of exercises in Shenzhen. 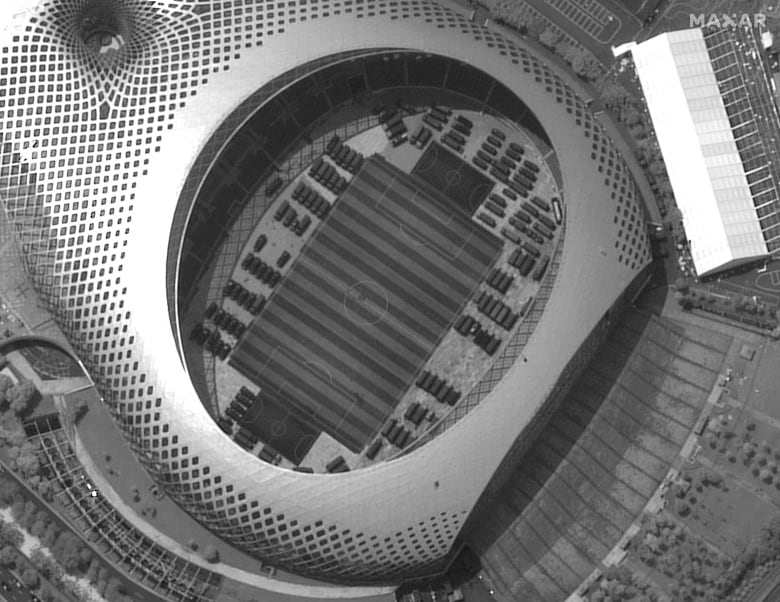 The paper said the vehicles belonged to the People's Armed Police and had gathered for "apparent-large scale exercises." Its editor, Hu Xijin, described it on Twitter as "a clear warning to rioters in Hong Kong."

The Communist Party's official People's Daily newspaper said on the social media platform Weibo that the force handles incidents that include riots and terrorist attacks.

"There is usually PAP in Shenzhen, but this time it appears to directed against Hong Kong," said a taxi driver, who gave his surname as Wang. "Usually they wouldn't hold such a big exercise."

Still, diplomats in Hong Kong said they believe Chinese leadership is well aware that moving mainland forces into Hong Kong would shatter international faith in the "one country, two systems" model at the heart of Hong Kong's role as a global financial hub, and would swiftly lead to sanctions.

"We are seeing an escalation in the posturing that appears designed to send messages to both Hong Kong and the mainland ... but we are confident we are still in the realms of propaganda here," one senior Western envoy told Reuters, speaking on condition of anonymity because he was not authorized to speak to the media. "The trucks aren't about to roll at this point."

Alexander Neill, a Singapore-based security analyst at the International Institute of Strategic Studies, said it would take far more serious scenarios to spark such a move.

"I think we'd really need to see a total breakdown and a sense that China's national interests were at great risk and could not be protected by the Hong Kong government and its police," he said. 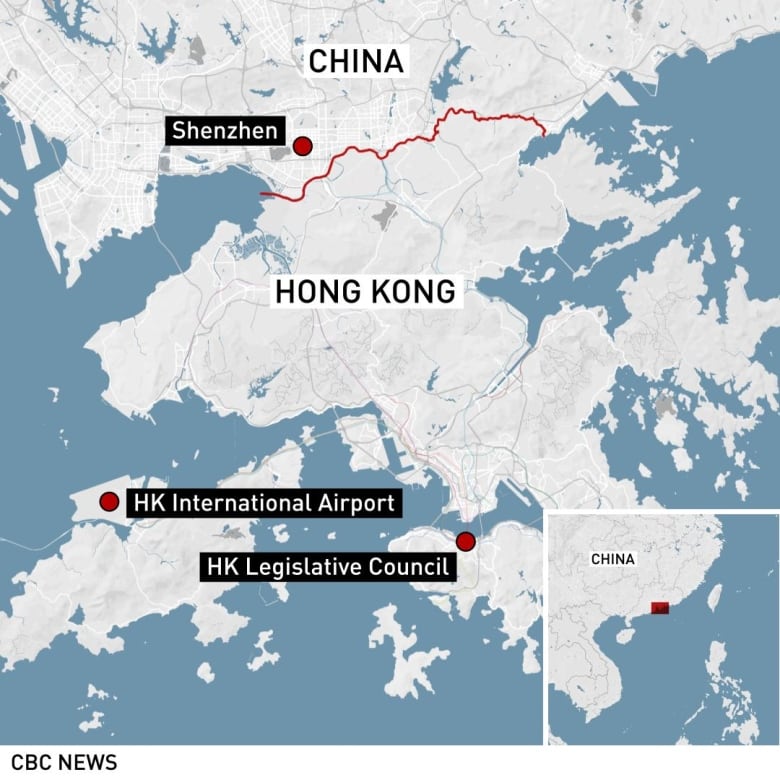 The Chinese city of Shenzhen is located across the border from Hong Kong. Paramilitary police were assembling in Shenzhen for exercises in what some saw as a threat to the pro-democracy protesters in Hong Kong. (CBC News)

Worst-case scenarios, he said, could involve the assassination or kidnapping of Chinese officials in Hong Kong, the sacking and occupation of key offices there or the government's losing control of parts of the police force.

"We're a long way from anything like that yet, so I think what we are seeing is harder posturing that is part of a much broader propaganda effort underway on many fronts," he said.

The Shenzhen stadium sits across the water from Hong Kong's rural hinterland, near a bridge straddling the border.

People working around the stadium said the level of PAP activity was higher than they had ever seen, but not disruptive, as the troops usually kept to themselves.

The chief disruption was PAP vehicles occupying parking spaces, and people who worked in the area said they'd been told not to share pictures of vehicles.

Hong Kong airport protests are a warning that...

Family of teen who died at debs warn of fake...

3 Star Trek: Picard Podcast: Jonathan Frakes Is At The Helm...

4 Why You Should Be Jumping On The Facial Jewelry Trend...

6 Coronavirus is keeping Chinese travellers at home — and...

8 Where Is Logan Brown Today? New Details What The Oldest...

9 QUIZ: We give you the TD, you name their party

10 They Grow up so Fast: See What These Celebrity Kids Are...