The United Nations and the International Red Cross and Red Crescent Movement are urging governments and others to unite in developing a "people's vaccine" to protect everyone against the novel coronavirus.

Their appeal came ahead of a summit in London organized by the Global Vaccine Alliance that is seeking to mobilize billions of dollars of funding for a COVID-19 vaccine.

The "people's vaccine" should protect the affluent, the poor, the old and young, said a statement by the UN and the International Red Cross and Red Crescent Movement. That is a "moral imperative that brings us all together in our shared humanity," the statement said.

It said the pandemic is also raising risks of other illnesses as it disrupts childhood immunization programs, leaving at least 80 million children under the age of one at risk of diseases like measles, diphtheria and polio.

According to Johns Hopkins University, which has been tracking coronavirus cases, there are more than 6.5 million cases of coronavirus globally as of Thursday morning, and there have been more than 386,000 deaths.

More than 107,000 of those deaths happened in the United States.

As of midday ET Wednesday, Canada had 93,040 confirmed and presumptive coronavirus cases, with 50,980 of the cases considered recovered or resolved. A CBC News tally of deaths based on provincial data, regional information and CBC's reporting stood at 7,539.

New research is helping move toward solid evidence about whether the controversial anti-malarial drug hydroxychloroquine can be used to prevent or treat COVID-19. 1:54

As countries such as New Zealand and Australia mark progress in containing the pandemic and work on plans to resume some international air travel, others are having to step up precautions.

North Macedonia reintroduced stringent restrictions on movement in its capital, Skopje, and three other areas after confirming 101 new infections as of Thursday.

In the U.S., where a wave of protests is adding to concerns over possible additional outbreaks, new cases of the coronavirus have been surging just weeks after many businesses were allowed to reopen in some states.

COVID-19, the illness caused by a novel virus that was first reported in China and has since spread around the world, causes mild or moderate symptoms for most people. For some, especially older adults and people with existing health problems, it can cause more severe illness or death.

Read on for a closer look at what's happening around the world on Thursday.

In Russia, a planeload of 150 ventilators arrived from the U.S. on Thursday, Washington's embassy in Moscow said, to help fight the novel coronavirus in further medical aid collaboration between the two politically estranged nations.

Russia's case tally, the world's third highest, rose to 441,108 on Thursday after 8,831 new infections were reported, and 169 more people died in the previous 24 hours. At 5,384, Russia's death toll is lower than many other countries, sparking debate over the way the country counts fatalities. 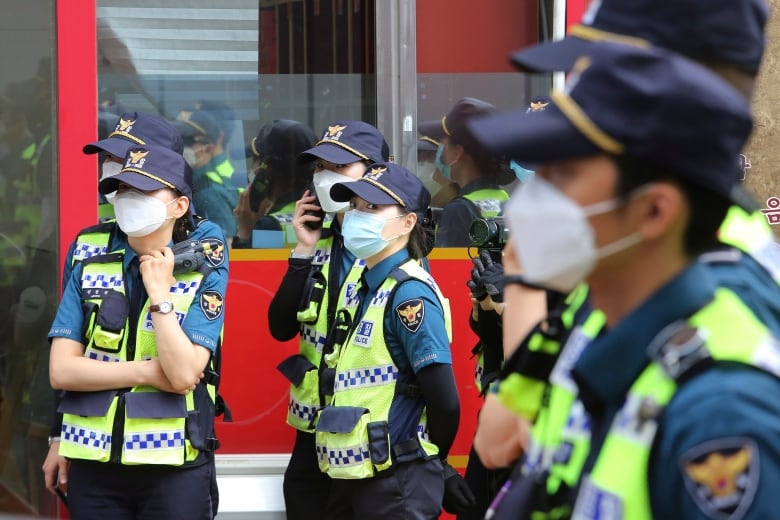 Police officers wearing face masks to help protect against the spread of the novel coronavirus stand guard during a rally near the Chinese embassy in Seoul, South Korea on Thursday. (Ahn Young-joon/The Associated Press)

The governor of Jakarta, Indonesia's capital, announced on Thursday the easing of some coronavirus restrictions, though he warned that the fight against the outbreak was far from over in Southeast Asia's biggest city. The governor said that on Friday, some public transport could resume normal operations and houses of worship could reopen, though with restrictions. Restrictions on movement, in place since mid-April, would be extended.

India's cases reached 216,919 after 9,304 new cases were reported over the previous day, the health ministry said Thursday. The densely packed cities of Delhi and Mumbai are seeing a spike in infections as the government lifts a lockdown imposed in March.

Malaysian authorities on Thursday reported 277 new coronavirus cases after infections were detected in an immigration detention centre. The rise in new cases pushed Malaysia's cumulative total past the 8,000 mark to 8,247. The health ministry reported no new deaths, keeping total fatalities at 115.

Black Americans are disproportionately affected by COVID-19, says Toronto respirologist Dr. Samir Gupta, while noting that similar data is not available for Canada. 6:18

Spain said on Thursday that all restrictions at border crossings with France and Portugal will be lifted from June 22. The authorities closed the borders to everybody but Spaniards, cross-border workers and truck drivers from mid-March when the country went into lockdown to curb the spread of the coronavirus.

The European Union is preparing to use an emergency 2.4-billion-euro ($2.7 billion US) fund to make advance purchases of promising vaccines against the novel coronavirus. The EU's push follows moves from the United States to secure vaccines under development, including almost a third of the first one billion doses planned for AstraZeneca's experimental COVID-19 shot.

In Sweden, confidence in the ability of the government and the health agency to handle the outbreak of the novel coronavirus is falling amid growing worries about the high mortality rate, polls published on Thursday showed. Sweden's decision not to adopt a lockdown as in many other European countries was widely supported by the population, but criticism has been growing in recent weeks over the country's high death rate from COVID-19 when compared to its Nordic neighbours, especially among the elderly.

WATCH | Are you making these mask mistakes?

The central Chinese city of Wuhan has tested nearly every one of its 11 million residents for the coronavirus in a mass effort that resulted in the isolation of 300 people, authorities said Wednesday.

The pandemic is believed to have originated last year in the industrial city that went under lockdown for 76 days to try to stop the outbreak. Wuhan still accounts for the bulk of China's 83,021 cases and 4,634 deaths from the disease.

The testing effort carried out in the second half of May targeted every resident not already tested and excluded only children under age six.

"This is extraordinarily rare anywhere in the world," National Health Commission expert Li Lanjuan told reporters. "It not only shows confidence and determination in the fight against the epidemic in Wuhan but has also provided reference to other cities for their prevention."

The coronavirus pandemic has pushed Australia's economy into recession for the first time in 29 years. Federal Treasurer Josh Frydenberg said on Wednesday the current June quarter will be the second in a row in which the Australian economy has shrunk. A recession is defined as at least two successive quarters of contraction.

Data released on Wednesday for the March quarter shows a 0.3 per cent contraction since the three months through December because of the destructive wildfires and the early stages of the coronavirus lockdown.

Frydenberg said the Treasury Department had advised the June quarter result will be worse.

8 What Makes A YouTube Video Hit The Trending Tab? This...