Death toll from Typhoon Hagibis in Japan rises to 19

Helicopters, boats and thousands of troops were deployed across Japan on Sunday to rescue people stranded in flooded homes Sunday as the death toll from a ferocious typhoon climbed to at least 19 with more than a dozen missing.

Public broadcaster NHK said 14 rivers across the nation had flooded, some spilling out in more than one spot.

The casualty toll was compiled by Kyodo News service and was higher than one given by the government spokesperson earlier Sunday, a day after Typhoon Hagibis made landfall south of Tokyo and battered central and northern Japan with torrents of rain and powerful gusts of wind.

News footage showed a rescue helicopter hovering in a flooded area in Nagano prefecture where an embankment of the Chikuma River broke, and streams of water were continuing to spread over residential areas. The chopper plucked those stranded on the second floor of a home submerged in muddy waters.

Aerial footage showed tractors at work trying to control the flooding and several people on a rooftop, with one waving white cloth to get the attention of a helicopter. Nearby was a child's school bag. In another part, rows of Japan's prized bullet trains, parked in a facility, were sitting in a pool of water. 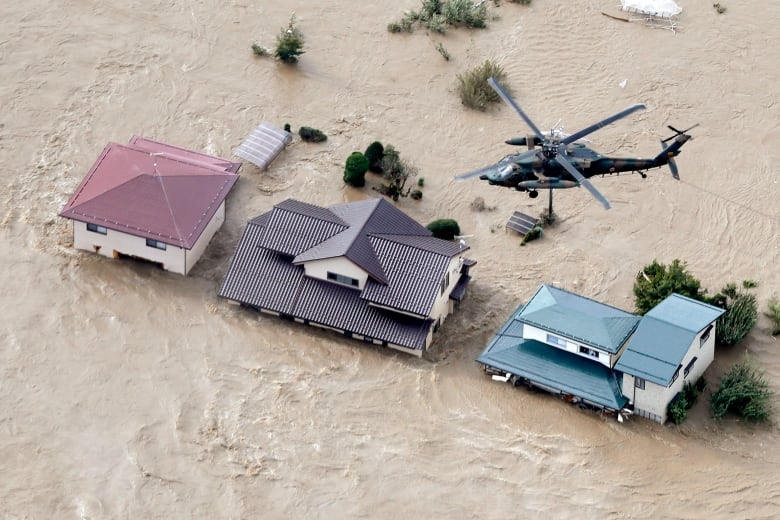 A stretch of Fukushima, in the city of Date, was also flooded with only rooftops of residential homes visible in some areas, and rescuers paddled in boats to get people out. Parts of nearby Miyagi prefecture were also under water.

The Tama River, which runs by Tokyo, overflowed its banks, flooding homes and other buildings in the area.

Hundreds of thousands of homes with no power

Authorities warned of a risk of mudslides. Among the reported deaths were those whose homes were buried in landslides. Other fatalities included people who got swept away by raging rivers.

Suga said recovery was on its way. Some 376,000 homes were without electricity, and 14,000 homes lacked running water, he said. 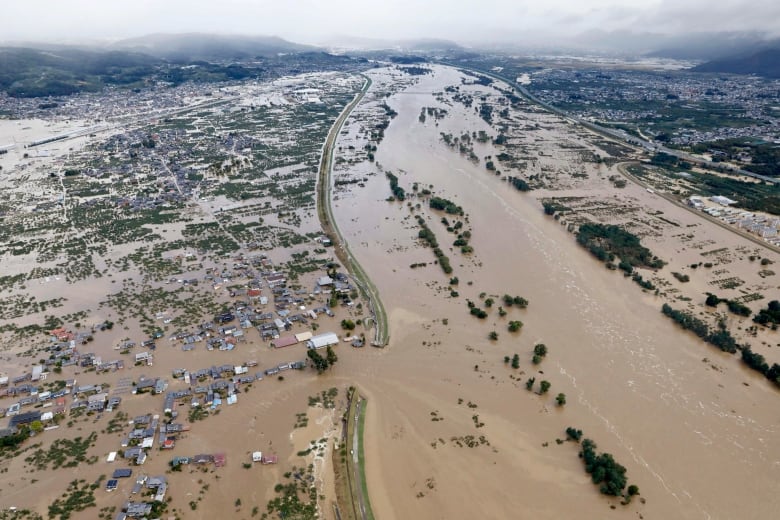 A residential area is seen submerged in muddy waters after an embankment of the Chikuma River broke in Nagano on Sunday. (Yohei Kanasashi/Kyodo News via AP)

Boats as well as helicopters were sent to the flooded areas, while rescue crew dug through dirt elsewhere to try to get people out from homes buried by landslides.

Several train service in the Tokyo area resumed early morning, although others were undergoing safety checks and were expected to restart later Sunday.

Ruling party politician Fumio Kishida said the government will do its utmost in rescue operations, including making sure that those who moved to shelters were taken care of. People clean the flooded compound of their residential area hit by Typhoon Hagibi in Tokyo on Sunday. (Kyodo News via AP)

He acknowledged Japan's power grids need to be strengthened so people in disaster areas can rely on timely information.

"So many risks remain, and it is a reality we must stay on guard," Kishida said on an NHK TV news talk show. "We must do our utmost. In these times, a disaster can hit anytime."

The Rugby World Cup match between Namibia and Canada, scheduled for Sunday in Kamaishi, northern Japan, was cancelled as a precautionary measure, but organizers announced Japan will play Scotland as scheduled Sunday evening. Matches on Saturday had been cancelled. Stores and amusement parks had also closed.

As the typhoon bore down on Saturday with heavy rains and strong winds, the usually crowded train stations and streets of Tokyo were deserted with people advised to stay indoors. But life was quickly returning to normal under crisp clear skies Sunday.

Evacuation centres had been set up in coastal towns with tens of thousands seeking shelter. Kyodo News service said evacuation warnings had been issued to more than six million people. 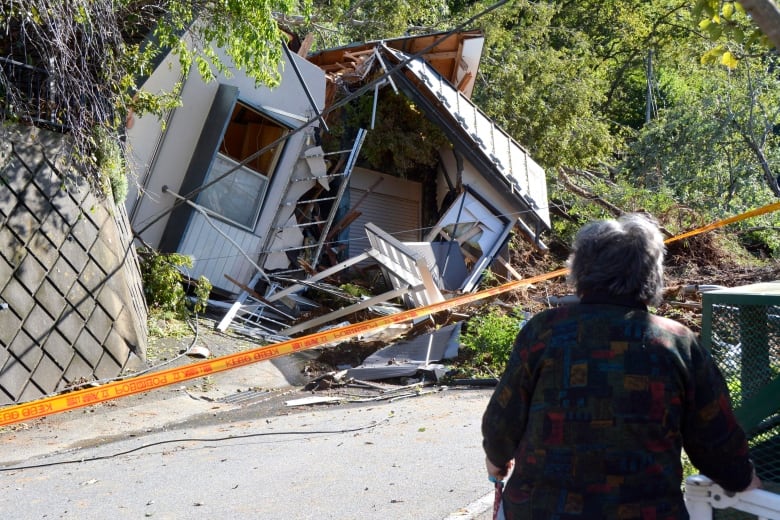 People look at a house damaged by a landslide in Sagamihara, near Tokyo, on Sunday. (Kyodo News via AP)

The typhoon disrupted a three-day weekend in Japan that includes Sports Day on Monday. Qualifying for a Formula One auto race in Suzuka was pushed from Saturday to Sunday.

The authorities had repeatedly warned Hagibis was on par with a typhoon that hit the Tokyo region in 1958. But the safety infrastructure that Japan's modernization had brought was apparent. The typhoon six decades ago had left more than 1,200 people dead and half a million houses flooded.

Asgard’s Wrath guide: How to dive into VR’s...