Democrats are pressing forward with their case at U.S. President Donald Trump's impeachment trial on Thursday, but his fellow Republicans have shown no signs of softening their resistance to arguments for removing him from office.

The seven House Democratic "managers" serving as prosecutors in the trial began the second of three days of opening arguments, having addressed the Senate for about eight hours on Wednesday.

Rep. Adam Schiff and the other Democratic managers are presenting arguments that Trump should be convicted of two articles of impeachment passed by the House last month — abuse of power and obstruction of Congress — for pressuring Ukraine to investigate Democratic rival Joe Biden last year, and impeding a congressional inquiry into the matter.

Blocked so far in their drive to persuade the Republican-led Senate to let them call new witnesses, Democrats are using their time instead to outline an extensive narrative, complete with video clips, based on the testimony presented during hearings in the Democratic-controlled House of Representatives.

The top Senate Democrat, Chuck Schumer, made a fresh appeal on Thursday for Republican senators to join with Democrats in voting to allow witnesses and new evidence to be presented in the trial. Republicans control the 100-seat Senate. Four of the Senate's 53 Republicans would have to join the Democrats in order to win a simple majority vote. 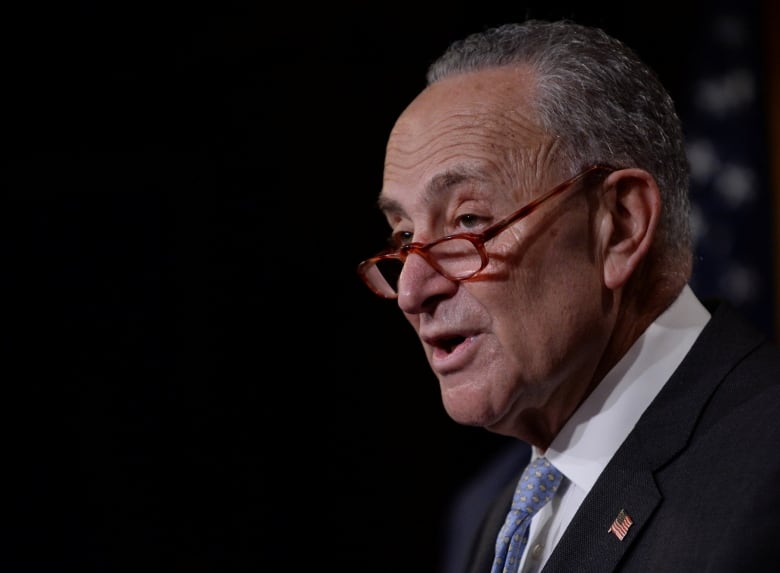 Senate Minority Leader Chuck Schumer addresses a news conference prior to the resumption of opening arguments in the impeachment trial of U.S. President Donald Trump on Thursday. (Mary F. Calvert/Reuters)

"The issue of relevant evidence, documents and witnesses is going to come back up. And Senate Republicans will have the power to bring that evidence into the trial," Schumer told reporters.

"Republican senators — four of them, it's in their hands — can make this trial more fair, if they want to," he said.

The case focuses on Trump's request that Ukraine investigate political rival Joe Biden, a top contender for the Democratic nomination to face Trump in the Nov. 3 presidential election, and Biden's son on unsubstantiated corruption allegations.

Trump is almost certain to be acquitted by the Senate, where a two-thirds majority is needed to remove him from office.

Even if finding Trump guilty seems to be a long shot for Democrats, the trial presents an opportunity to inflict political damage on Trump ahead of the November election, with millions of Americans watching the televised proceedings.

Trump, who arrived back in Washington on Wednesday night from the World Economic Forum in Davos, Switzerland, condemned the proceedings as "unfair & corrupt" in a Twitter post on Thursday.

Some Republican senators said they have heard nothing new in the presentation made by the Democratic managers.

Sen. James Lankford called it "a more organized presentation of the same facts."

Other Republicans were more circumspect. Sen. Mitt Romney said, "Sorry, but I'm not going to be commenting on the evidence or process until the entire trial is over." 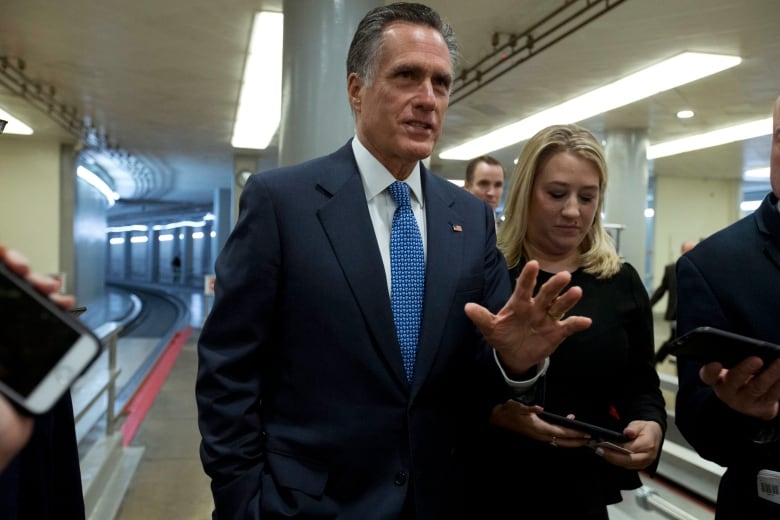 Republican Sen. Mitt Romney says he will wait to hear all the evidence before making a decision on whether to acquit the president. (Jose Luis Magana/The Associated Press)

Schumer called the arguments presented by the Democratic managers "powerful," "precise" and "devastating." Referring to Senate Republicans, Schumer said: "It may have planted the first seed in their minds that, yes, perhaps the president did something very wrong here."

Trump denies wrongdoing and his fellow Republicans have said his conduct did not fit the description of "high crimes and misdemeanors" outlined in the U.S. Constitution as rationale to oust a president.

Focus on the law

The Senate's schedule means Trump's defence team, a group of White House lawyers and outside counsel who will be given three days for rebuttal to the Democratic opening arguments, would likely start to present their case on Saturday.

Trump lawyer Jay Sekulow said it was unclear whether the Trump defence would need all three days.

"We will make a determination on our presentation based on what we are responding to and based on our affirmative case," Sekulow said. "I don't know if it will take 10 hours, 14 hours, 24 hours or six hours."

A Reuters/Ipsos poll released on Wednesday found 72 per cent of Americans — including 84 per cent of Democrats and 69 per cent of Republicans — want to see new witnesses testify in the impeachment trial.

Trump directed current and former administration officials, including Secretary of State Mike Pompeo and former national security adviser John Bolton, not to testify or provide documents in the House investigation.

2 ‘Away’ Canceled By Netflix After One Season

3 34 Times Children Had A Hard Time Dealing With Their...