Once you've found a good spot, all you have to do is add the device to your Alexa app. A few taps later and the Echo Studio is set up and ready to go. There's an audio calibration feature that analyzes the room for the best acoustic performance. However, that process begins automatically when you add the speaker in the app, and it only takes a few seconds. I wanted to test the Echo Studio both pre- and post-calibration, but that wasn't an option since the test kicks in on its own.

The Echo Studio is the best speaker Amazon has made yet, at least in terms of audio quality. And really, it's not even close. Yes, every Echo speaker is capable of playing music, but it's no secret they don't sound very good. So if great sound quality and Alexa support were both important to you, you had to look elsewhere or try to improve things with an additional purchase, like the Echo Sub. Those days are over.

To get the most out of this $200 device, you might want to consider Amazon Music HD or Tidal's high-res streaming plan. Sure, regular Spotify sounds good on the Echo Studio, but I prefer the HD and Ultra HD songs offered on Amazon's latest streaming tier. Other people I asked thought audio from Spotify sounded better. So, I'd recommend using your free trial from Amazon to see if you're willing to pay for the higher-resolution audio, or if just regular ol' streaming is enough for you. To me, there was more clarity, detail and dimensionality to sound with the HD and Ultra HD songs when compared to the same track on Spotify.

The Echo Studio upmixed regular stereo music with Dolby Atmos. The action is enabled by default as "Stereo Spatial Enhancement" in the speaker's audio settings, right under the EQ sliders. Amazon says this upmixing "adds space, clarity and depth to stereo audio content." And of course, the company recommends that you leave it turned on "for best audio experience." When playing Chvrches' "Death Stranding" and switching the tool on and off, the main difference is the non-enhanced audio from Spotify is louder and way more treble-heavy. With Stereo Spatial Enhancement, everything sounds well tuned and balanced. There is more depth, and it does sound better, but it's not quite as good as HD and Ultra HD tracks. 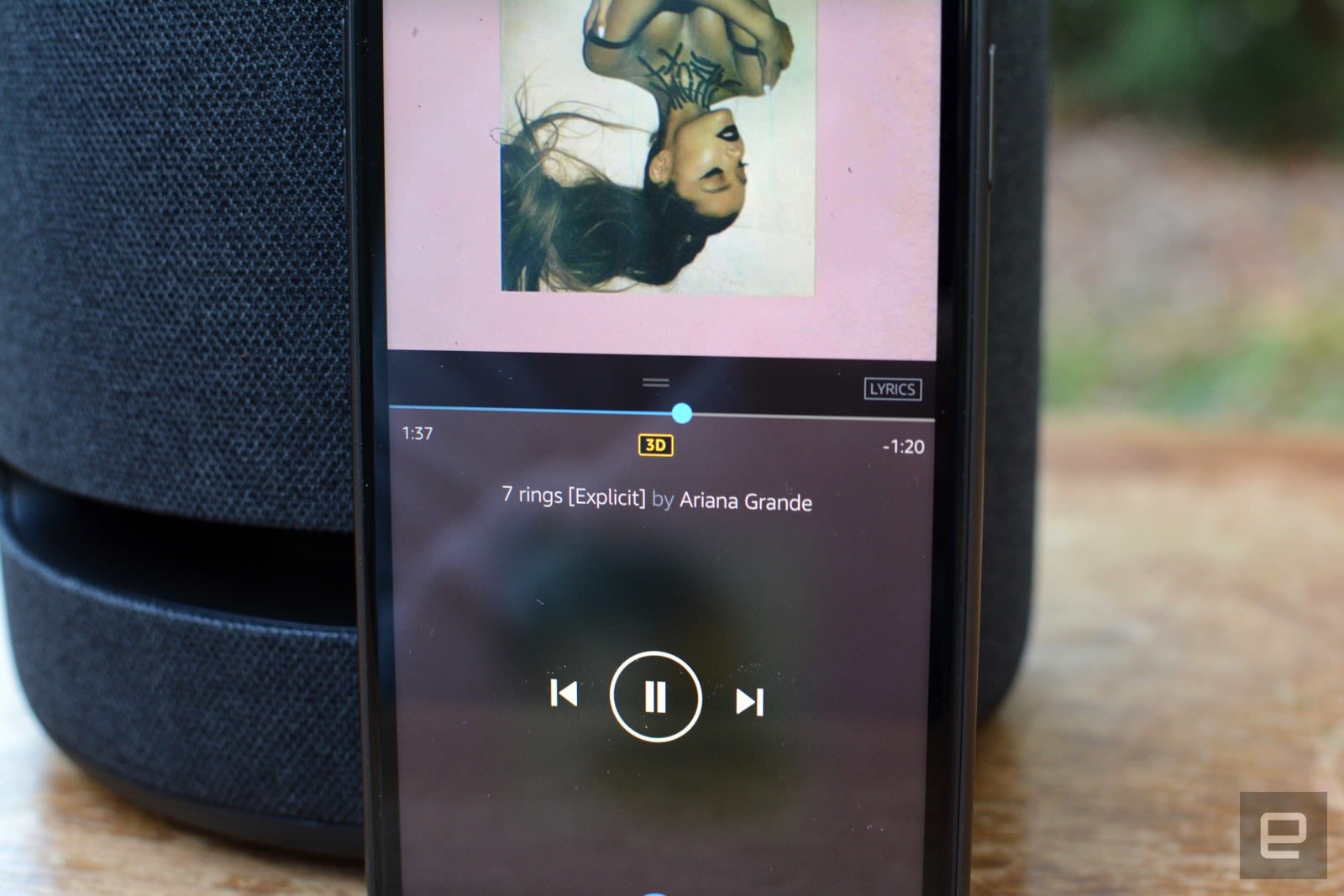 Spotify sounds really good on this thing too, by the way -- I'm just stating my preference for the high-res options. If you're an Echo fan and you've been yearning for better audio, "regular" streaming tiers will sound great. However, Echo Studio is equipped to handle lossless tunes if you're into that sort of thing. The speaker is also able to handle Sony's 360 Reality Audio content, which is more of a mixed bag at this point.

The main issue with 3D music on Amazon Music HD is there's not much of it right now. When you set up the Echo Studio for the first time, Alexa recommends a "Best of 3D Music" playlist on Amazon Music HD. But that collection ranges from Ariana Grande's "7 Rings" to Cam'Ron's hip-hop masterpiece "Oh Boy" and The Beatles' "Lucy In The Sky With Diamonds." There are four more curated 3D playlists for rock, pop, classical and hip-hop classics, but they only have between six and 12 songs each. There are other 3D songs, but they aren't easy to find in the Amazon Music app, and I've yet to find any full 3D albums.

So what you end up with is a mix of 3D and either HD or Ultra HD when you pick an album. For example, The Weeknd's Starboy has 10 3D tracks, but the other eight are Ultra HD. When you ask Alexa to play music, the assistant will default to the 3D version if it's available. In fact, if a 3D version is available on Amazon Music HD, I haven't found a way to choose the Ultra HD or HD track instead. And, of course, you can cast any songs from the streaming app to the Echo Studio, regardless of format. 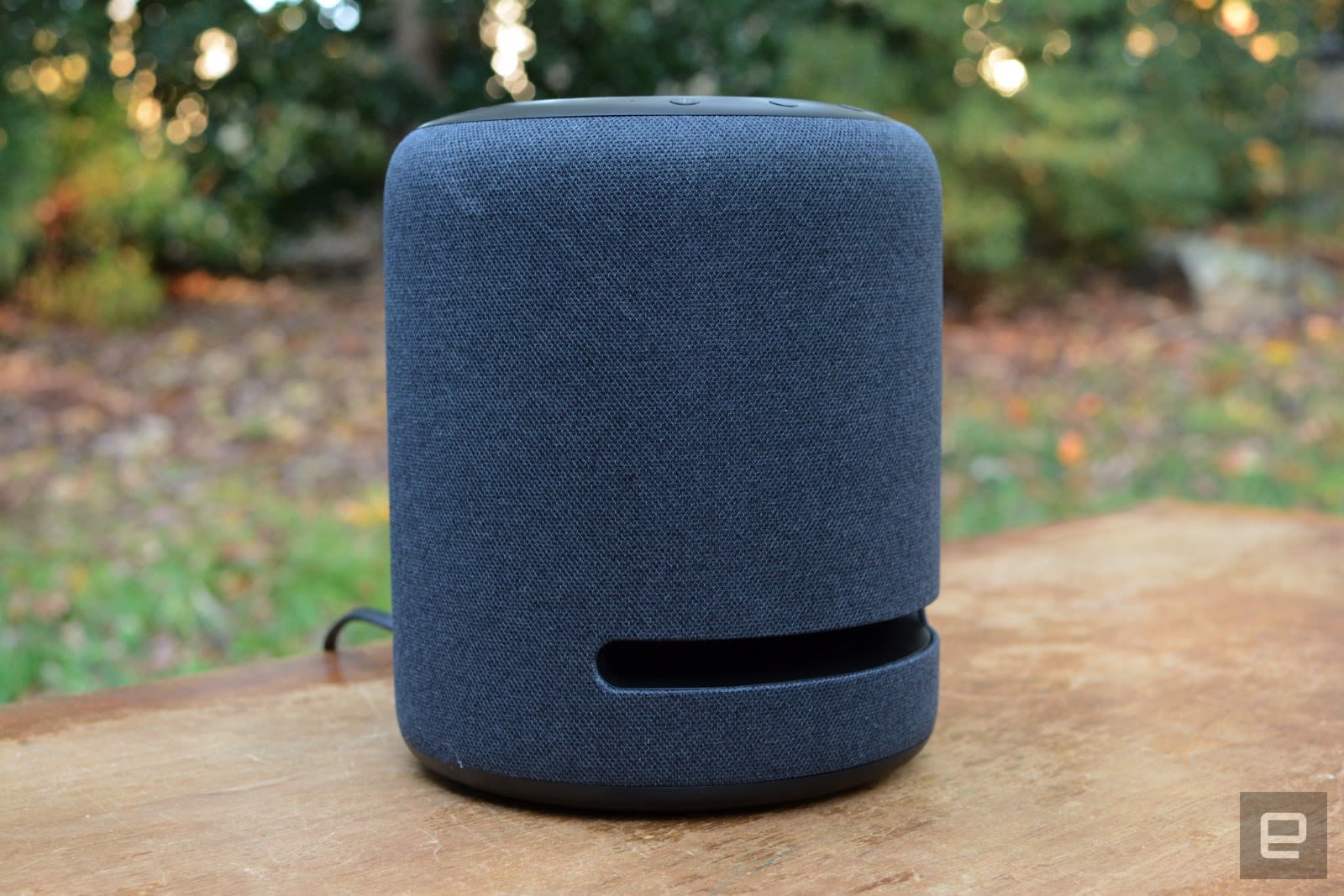 Honestly, I can't detect a huge difference between Ultra HD and 3D tracks on the Echo Studio. Unlike the prototype Sony speaker I heard at CES, it's still obvious the audio is coming from a single speaker, and where the speaker is positioned. There isn't noticeably more depth compared to the other high-res formats, which also do a solid job imparting a spatial quality to the sound. When compared to Spotify, the 3D tracks have more presence and more clarity, which does sound better to me. They're also noticeably louder, even if you don't change that level. Once again, some people I asked preferred "regular" Spotify to the 3D versions of the songs I played for them.

That being said, it's still early days for this manifestation of 3D audio. This is the first speaker where Sony's new ecosystem has been available, and there are only 1,000 songs to choose from right now. The Echo Studio is well-equipped for both the present and the near future, so long as Sony is able to deliver on its promise of more content. And hopefully Amazon will make it easier to find them.

With Dolby Atmos compatibility, the Echo Studio can also serve as a home theater speaker, but only with Fire TV devices. It accommodates Dolby Digital and Dolby Digital Plus, if whatever you're watching isn't Atmos-friendly. Setup is a breeze once again: all you have to do is connect your gear to your Amazon accounts and WiFi network through the Alexa app. As with the initial steps for music, you tap the "+" in the top right of the Alexa app. But this time you select "Set Up Audio System," and follow the steps. In a few taps, the Echo Studio will be connected via WiFI for Fire TV sound. You can also use the Fire TV remote to adjust volume when the time comes.

I was only able to test this with one Echo Studio, not a stereo pair. While Atmos was clearly an upgrade over Dolby Digital Plus when I compared them, it's no where close to what I've experienced with Sony and Sennheiser Atmos soundbars and setups. Of course, those start at over $1,000. There's more depth and subtle detail to things like city streets and gunfights. But like the 3D music, it's still obvious the sound is coming from a single speaker, rather than seeming like it's all around you.

6 This 103-Year-Old Woman Is The Last Living Tattooist Who...

8 Sony Wins Again At The Independence Day Box Office, This...

9 Sexologist Explains Why Getting People To Wear Face Masks...

10 Prince George and Princess Charlotte Are Finally on...