Emmys 2020: A glitch-free technical triumph and a thrilling comedy sweep for Schitt's Creek

It was a night of pitchy Zoom audio, surprisingly few technical issues and historic wins — particularly for Canadian comedy Schitt's Creek — at the 72nd Annual Emmy Awards on Sunday.

Though organizers had to dispatch nearly 130 camera kits to nominees around the globe to accommodate stars staying at home due to the ongoing COVID-19 pandemic, everything came together despite early predictions of dropped calls and general disaster.

Here are some of the highlights from a night of upsets, historic wins and big statements.

"Hello and welcome to the pand-Emmys," host Jimmy Kimmel announced to open the event. The late-night show host's opening monologue was an open acknowledgement of both the strangeness and frivolity of putting on an awards show during a pandemic.

At first, the crowd looked like that of a typical awards event, with pans of the audience showing smiling and laughing stars. That is until Kimmel admitted he was mostly alone, revealing the empty seats of the deserted Staples Center in Los Angeles. 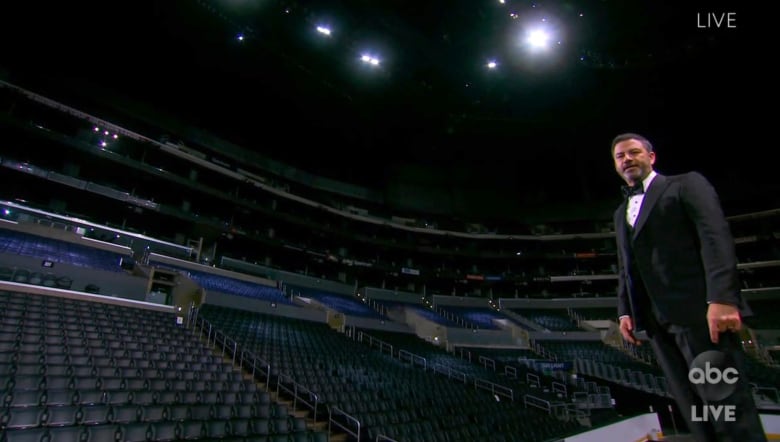 Host Jimmy Kimmel speaks on stage in front of empty seats at the Staples Center in Los Angeles. Though the building was mostly empty, the event came together as a technical triumph. (The Television Academy and ABC Entertainment/The Associated Press)

He went on to address the seemingly bizarre reason the Television Academy chose to proceed with the show. It could be considered "frivolous and unnecessary," to go during a pandemic, he said, but how is that unlike any other year?

After the monologue, the show kicked off with the comedy awards. Catherine O'Hara and Eugene Levy snagged Emmys for best comedy actress and actor off the top, and that was only the beginning for the much-beloved, made-in-Canada Schitt's Creek.

The show went on to sweep the comedy awards, nabbing top honours in all seven categories. After O'Hara and Levy's wins, Annie Murphy took the Emmy for best supporting actress, and Daniel Levy took three — best supporting actor, comedy writing and best director of a comedy series alongside Andrew Cividin. It was an Emmys first, something no other comedy has achieved before.

"If they'd won one more Emmy, they would have been able to trade them in for this," Kimmel joked and revealed a mock Stanley Cup. "But they didn't, so we're going to keep it here for another 27 years."

Kimmel aimed one more joke at Schitt's Creek before moving on, saying ABC censors demanded the show display the Schitt's Creek logo whenever the TV show's name was mentioned — to clarify what was being referenced. When the comedy show won every award in the first hour of the broadcast, the logo appeared frequently.

It also marked a stunning success for the network, which has been pitched in an ongoing battle with streaming giant Netflix.

The first seven #Emmys of the night have gone to "Schitt's Creek."

The stars of "Schitt's Creek" have won all four major acting categories.

Though Netflix set a record for the most nominations with 160, it won just 21, well behind HBO's 30 awards, which included statues for both Watchmen and its other success story, Succession. The show, about a dysfunctional family in charge of a global media empire, took home the top prize of best drama.

A night of upsets

Succession also scored awards for best writing for drama and directing for drama, and it won statues for lead actor in a drama series for Jeremy Strong. Strong beat his co-star Brian Cox, who plays Strong's father on the show and was widely expected to win. The award marked Strong's first-ever Emmy nomination.

That wasn't the only upset of the night. Actor Zendaya won for her performance in the series Euphoria, with her team erupting into loud, screaming applause behind her.

CBC comedy Schitt's Creek picked up multiple awards at the 72nd Emmy Awards held virtually, and with no red carpet, due to the COVID-19 pandemic. 3:24

At 24, Zendaya is the youngest to win an Emmy for lead actress in a drama, and she beat out Sandra Oh and Jodie Comer for their work on Killing Eve, Jennifer Aniston for The Morning Show, Laura Linney for Ozark and Olivia Colman for The Crown.

The virtual nature of the Emmy program didn't lessen the number of impassioned speeches. Actor Anthony Anderson coaxed Kimmel into shouting "Black Lives Matter" before presenting the nominees for outstanding limited series. Daniel Levy encouraged members of the audience to register to vote, and Sterling K. Brown presented the final award of the night while sporting a Black Lives Matter T-shirt. There were various other commentaries, some more lighthearted than others, including one moment from Ramy Youssef, creator of the comedy series Ramy.

Youssef was up for both best directing and best lead actor in a comedy series, both of which ultimately went to Schitt's Creek. Even still, a hazmat wearing presenter showed up to Youssef's home, only to wave goodbye once the real winners were announced.

"When you lose the Emmy," Youssef captioned a tweet. An attached video showed the presenter walking away with the golden statue, revealing what happens when you don't win at the COVID-19-shaped Emmys.

Is a smaller manufacturing process always...

7 ‘The Daily Show With Trevor Noah’ Sheds Light On #EndSARS...