Farmers and trappers can keep using sodium cyanide bombs to kill coyotes and other livestock predators, the U.S. Environmental Protection Agency (EPA) said on Thursday, rejecting calls for a ban despite repeated instances of the devices poisoning other wildlife, pets and people.

Instead, the EPA is revising the regulations for using the M-44 devices, the agency said in a news release announcing its revised interim decision.

"Through our discussions, we identified new restrictions that will raise awareness and create additional buffers around where M-44s are placed, which will reduce the potential for unintended impacts on humans, pets and other non-target animals," said Alexandra Dunn, the EPA's assistant administrator for the office of chemical safety and pollution prevention.

The new restrictions say sodium cyanide devices cannot be placed within 600 feet (183 metres) of homes, unless a "cooperating landowner … has given written permission for placement of the devices on their property."

The devices also cannot be placed within 300 feet (91 metres) of designated public paths and roads — an increased distance from the previous restriction of 100 feet (30 metres).

Users would also would have to post two warning signs within 15 feet (4.5 metres) of the poison bombs. Previously, only one sign had to be posted and it could be further away from the devices. 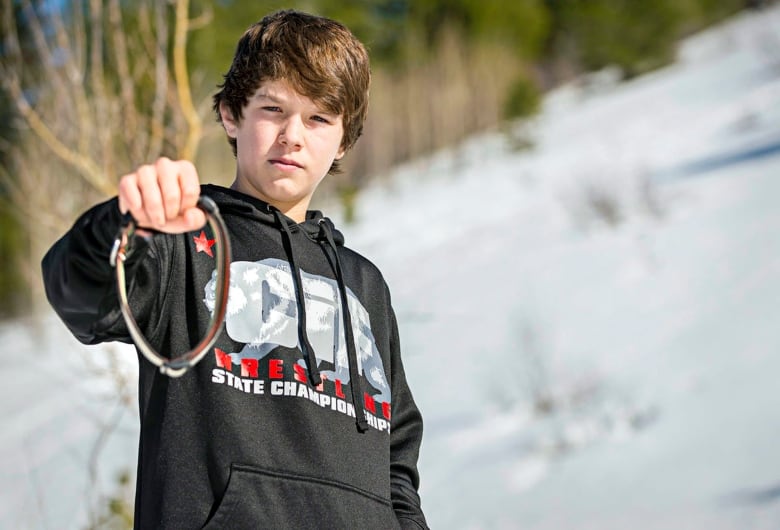 In this March 17, 2017 file photo, Canyon Mansfield, 14, holds the collar of his dog, Casey, who was killed by a cyanide-ejecting device placed on public land near Pocatello, Idaho. (Jordon Beesley/Idaho State Journal via AP)

In the news release, Dunn said the EPA had worked with the U.S. Agriculture Department "to ensure there are safe and effective tools for farmers and ranchers to protect livestock."

Agriculture industry groups, including the National Cattlemen's Beef Association, applauded the EPA's decision through statements included in the news release, saying the sodium cyanide traps are an "important tool" to control livestock predators.

The Center for Biological Diversity and other conservation advocacy groups had sought a ban on the devices, which typically are covered with smelly bait, and are designed to eject deadly sodium cyanide when an animal stops to inspect and gnaw on them.

In 2017, one of the devices injured a 14-year-old Idaho boy walking near his home and killed his pet dog.

Collette Adkins, carnivore conservation director at the centre, cited two earlier instances this century of the devices spraying sodium cyanide on people out hunting for rock specimens or walking their dogs.

Federal wildlife trappers and hunters reported killing 6,579 animals with the devices last year, including more than 200 other non-targeted animals, including bears.

"You're out hiking with your dogs and your children, and you come across these, you have to be lucky enough to see one of these signs," Adkins said. Any dog "that's running around is going to get killed."

Livestock raisers and agricultural groups opposed calls for a ban. In 2015, coyotes accounted for 17,000 deaths among the country's 112 million cattle and calves, the Agriculture Department estimated.