Belarusian leader Alexander Lukashenko should no longer be recognized as president after November, when his term expires, the European Parliament said on Thursday, calling for European Union economic sanctions to be imposed on him.

In an overwhelming show of support for pro-democracy protesters in Belarus, the EU assembly voted 574 to 37, with 82 abstentions, to reject the official results of an Aug. 9 presidential election that the West says was rigged.

While the European Parliament's vote is not legally binding, it carries political weight and can influence how the EU invests in Belarus or grants financial support.

"Once the term of office for the incumbent authoritarian leader Alexander Lukashenko expires on 5 November, parliament will no longer recognize him as the president of the country," the parliament said in a statement.

Mass protests since the August election have posed the biggest threat yet to Lukashenko and his attempts to extend his 26-year rule, although EU governments have yet to respond with sanctions.

Moscow's backing has become crucial for Lukashenko's survival as president, and the Kremlin has accused the West of seeking a revolution in the country.

Poland said Thursday it wants the European Union to offer Belarus financial assistance of at least 1 billion euros ($1.87 billion Cdn) as part of a Marshall Plan-type effort to rebuild Belarus.

Polish Prime Minster Mateusz Morawiecki said the financial assistance would form part of a support package for Belarus, which he will propose at the next EU summit on Sept. 24-25. 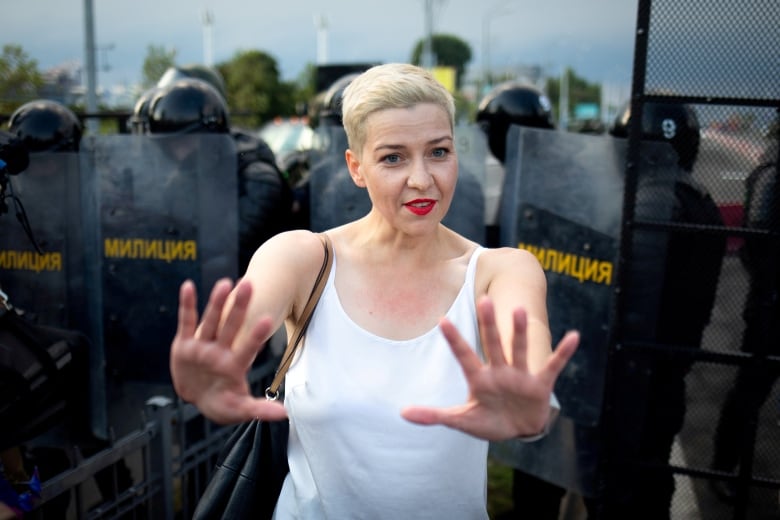 Belarusian opposition politician Maria Kolesnikova is shown Aug. 30 in Minsk during a protest. Kolesnikova, who resisted exile to Ukraine, was charged with national security offences this week. (Tut.By/Reuters)

Meanwhile, 17 members of the Organization for Security and Cooperation in Europe (OSCE) have appointed an independent expert mission to investigate alleged human rights violations in Belarus, Denmark's foreign ministry said on Thursday.

The expert mission, charged with looking into numerous reports of human rights violations before, during and after the Aug. 9 election, is expected to publish a report within six to eight weeks, the ministry said.

In the Belarus protests, several opposition leaders have been exiled or arrested. On Wednesday, investigators officially charged Maria Kolesnikova, a protest leader, with incitement to undermine national security.

Kolesnikova was charged with calling for "actions aimed at undermining Belarusian national security" using the media and the internet, the committee said.

Kolesnikova, 38, is currently in jail in Minsk after ripping up her own passport last week to thwart an attempt to expel her to Ukraine.

Meanwhile, some Belarusian citizens who have been detained in protests have reported to human rights organizations allegations of torture and abuse while imprisoned.

7 Sophie Turner urges 'empathy' in a sweatshirt while on a...