Former South African president Jacob Zuma told a corruption inquiry on Monday he had never broken the law with the Gupta family, describing the businessmen at the centre of an influence-peddling scandal as friends.

Zuma also said he was the victim of a conspiracy by enemies who had tried to get rid of him for more than 20 years.

His appearance at the inquiry — set up to test allegations that Zuma allowed cronies to plunder state resources and influence government appointments — marked a dramatic fall from grace for a politician who long dominated the country's politics.

Referring to the three Gupta brothers, Zuma said: "I never did anything with them unlawfully, they just remained friends. Never, never did I discuss any matter that does not belong to them.

I'm not a businessperson, I know nothing about business, I'm a politician, I know something about politics.- Jacob Zuma

Zuma, ousted by the governing African National Congress (ANC) in February 2018 and replaced by President Cyril Ramaphosa, has consistently denied wrongdoing over his nine years in power.

Under pressure from rivals in the ANC, Zuma set up the corruption inquiry he now sits before in his final weeks as president, as a number of his colleagues, including Ramaphosa, feared scandals surrounding Zuma could indelibly tarnish the party's reputation.

Zuma had avoided establishing the inquiry since a 2016 report by South Africa's anti-corruption watchdog, the public protector, instructed him to do so to investigate allegations that three Gupta brothers had been able to influence ministerial appointments and had won state contracts improperly.

The Gupta family denied the accusations and left South Africa around the time that Zuma was ousted.

Zuma, 77, struck a defiant tone at the hearing in Johannesburg.

"I've been vilified, alleged to be the king of corrupt people," he said in his opening remarks, looking relaxed and wearing a dark suit and a red tie.

"This commission, from my understanding, was really created to have me coming here, and perhaps to find things on me," he added. "There has been a drive to remove me from the scene … a conspiracy against me."

A group of several dozen supporters broke into clapping and chants of "Zuma" as the former president entered the room.

Zuma's son Duduzane and ally Des van Rooyen, whom Zuma appointed finance minister in 2015 before reversing the decision days later as financial markets tanked, were among those supporting the former president. 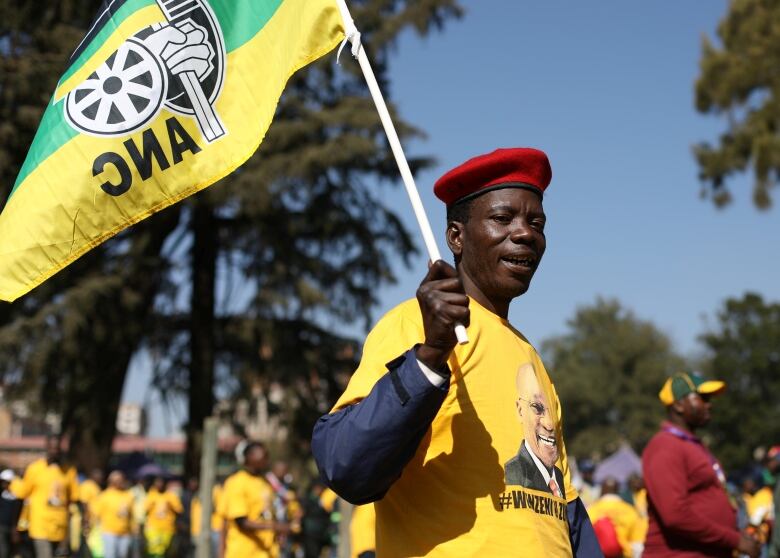 A supporter of former South African president Jacob Zuma is shown outside the public inquiry into state graft in Johannesburg. (Siphiwe Sibeko/Reuters)

Zuma is expected to give evidence from Monday to Friday in testimony broadcast live on South African television. It is a rare example of an African leader being brought to book soon after losing power.

The inquiry, headed by South Africa's deputy chief justice, Raymond Zondo, held its first hearing in August and is due to finish next year.

On Sunday, Zuma made fun of his opponents in a video posted on Twitter in which he laughed and danced while chanting "Zuma must fall," a slogan used by protesters demanding he step down several years ago.

Zuma has also been in court on several occasions over the past year to answer corruption charges linked to a deal to buy military hardware for the armed forces in the 1990s.

I thought I should brighten up your day pic.twitter.com/T9kJgBUZz8—@PresJGZuma

Ramaphosa, Zuma's former deputy, has made sweeping personnel changes in government and state-owned companies as part of an effort to curb corruption and revive the stagnant economy.

But he has been hampered by the lingering influence that Zuma and his allies exert over the ANC's top decision-making bodies, as well as by the scale of the problems he inherited.

Family Promises $500 To Anyone Who Finds Their Missing Cat, Gets Mad When Someone Actually Asks For The Reward

2 Uber tests letting some California drivers set their own...

4 Tencent makes $148 million offer to acquire all shares of...

5 The importance of context when watching movies

6 Blake Shelton Jokes He Didn't 'Disagree' with the...

7 The New Stephen King? This Next Generation Horror Writer...

10 Key things to watch for in the coronavirus outbreak