Handcuffing George Floyd and pinning him facedown to the pavement — along with the knees of Derek Chauvin pressed into his neck and back  — all combined to cut off his oxygen supply which led to his death, a respiratory expert called by the prosecution testified on Thursday.

"Floyd died from a low level of oxygen, and this caused damage to his brain that we see and it also caused a PEA arrhythmia that caused his heart to stop," Tobin, a lung and critical care specialist at the Edward Hines Jr. VA Hospital and Loyola University's medical school in Chicago, told the court.

In a direct swipe at the defence's case, Tobin said Floyd's pre-existing health conditions had nothing to do with his death. Nor, said Tobin, did the presence of fentanyl have any significant impact.

Floyd, a 46-year-old Black man, died on May 25, 2020, after Chauvin, who is white, pressed a knee on the back of Floyd's neck and his back for around nine minutes as two other officers held him down. Video of the arrest captured by a bystander prompted widespread outrage, setting off protests across the U.S. and around the world.

The prosecution says Chauvin pressing his knee into Floyd's neck caused his death. But the defence argues Chauvin did what his training taught him and that it was a combination of Floyd's underlying medical conditions, drug use and adrenaline flowing through his system that ultimately killed him.

Tobin dismissed any suggestion that fentanyl in Floyd's system led to his death, saying that based on his calculations, Floyd's respiratory rate before he lost consciousness would have been much lower if this was the case. 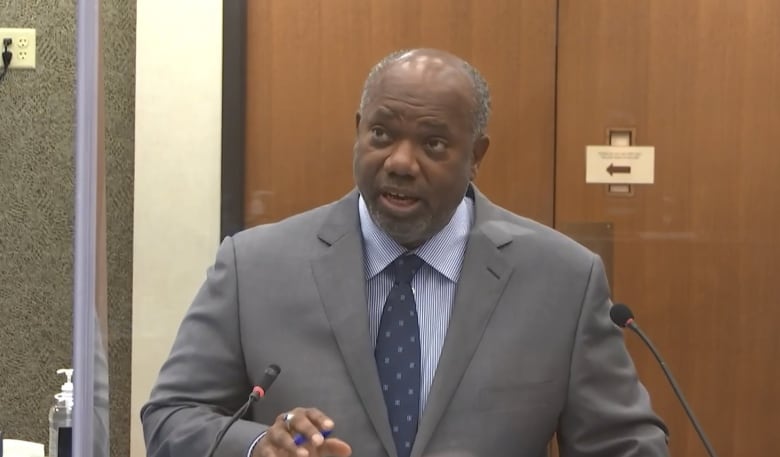 Questioned by prosecutor Jerry Blackwell, Tobin went through his detailed examination of Floyd's death, based on medical records, videos and interviews. Tobin explained the actions that led to Floyd's lack of oxygen and eventual death: That he was handcuffed, put in the prone position, (meaning facedown),  and that Chauvin's knees were pressed into Floyd's neck and back.

"All of these four forces are ultimately going to result in the low tidal volume, which gives you the shallow breaths," he said.

Tobin said the way the police were pushing down on Floyd's handcuffs, combined with Floyd being pressed against the hard pavement, was like his left side was put in a vice "that totally interfere(s) with central features of how we breathe."

"There was virtually very little opportunity for him to be able to get any air to move into the left side of his chest," he said.

"He's jammed down against the street. And so the street is playing a major role in preventing him from expanding his chest."

'Examine your own necks'

Tobin also explained that Chavin's knee on Floyd's neck "is extremely important because it's going to occulde (stop) the air getting in through the passageway."

"Officer Chauvin's left knee is virtually on the neck for the vast majority of the time," he said.

At that point in his testimony, Tobin invited jurors to "examine your own necks, all of you in the jury right now" to better understand the effect of a knee on a person's neck. Most of the jurors felt their necks as Tobin instructed, though the judge later told them they didn't have to do so.

Based on videos of the incident, Tobin said he calculated that half of Chauvin's weight , 91.5 pounds, came down directly on Floyd's neck

Tobin explained to jurors what happens as the space in the airway narrows. Breathing then becomes "enormously more difficult," he said, comparing it to "breathing through a drinking straw."

He said that if the hypopharynx — the bottom part of the throat — becomes totally obstructed, it takes just seconds to reduce the level of oxygen to where it would result "in either a seizure or a heart attack."

As for Chauvin's knee pressed into Floyd's back, that meant there was "a huge increase in the work that Mr. Floyd was performing just to try and cope with what was happening below the neck, leaving aside what is happening above the neck," Tobin said.

Tobin also explained that just because Floyd was talking and shown moving on video, it doesn't mean he was breathing adequately.

He said a person can continue to speak until the airway narrows to 15 per cent, but once it gets below that, it's dangerous. "At the point where you can't speak ... you are in deep trouble," he said.

The trial will continue on Thursday.