Fox News predicted his 70K minimum salary idea would fail. He proved them wrong—by a lot. 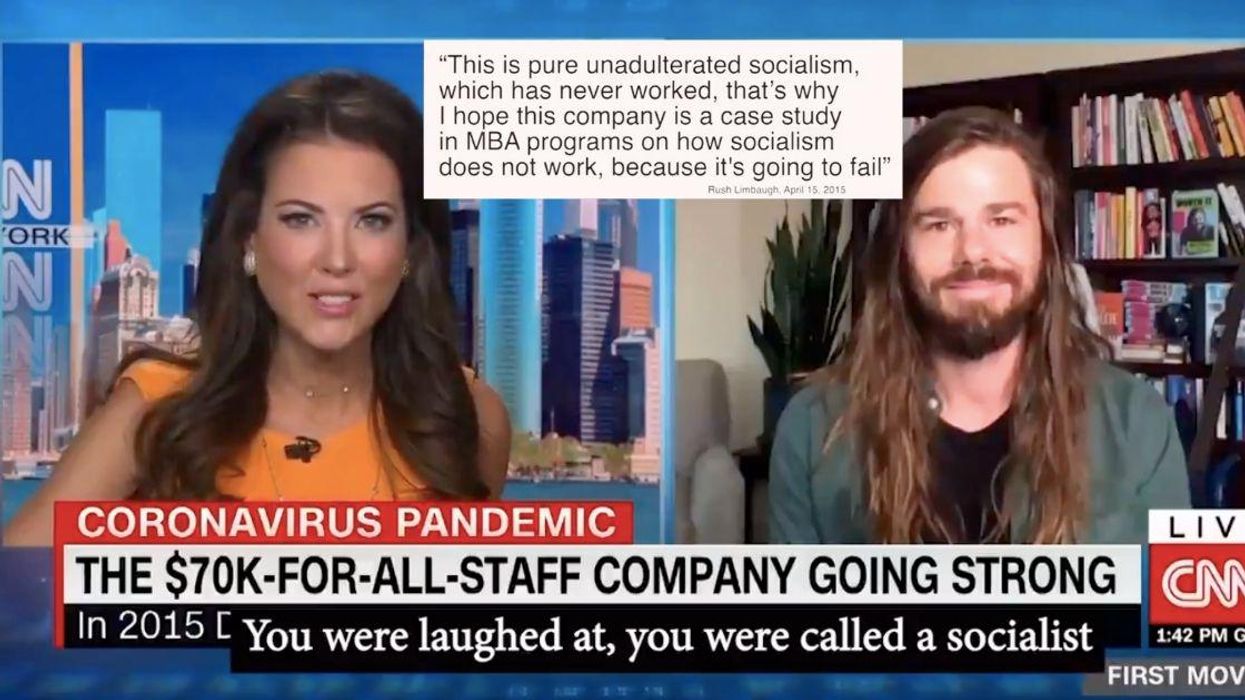 In 2015, Gravity Payments CEO Dan Price had a life-changing epiphany.

Price, who founded Gravity with his brother in 2004, was out hiking in the Cascade Mountains with his friend, Valerie. She told him her landlord had raised her rent by $200 and she was struggling to get by on her $40,000 a year income. Price, who was making $1.1 million a year as CEO of Gravity, was struck by her story. Not only did he feel for Valerie—a military veteran working two jobs and barely making ends meet—realized that some of his own employees might be facing similar struggles.

And they were. One employee frankly told him his entry-level salary was a rip-off. Another employee had secretly been working at McDonald's outside of work hours to make ends meet. So Price decided to make a drastic change by investing in his employees.

He researched how much money the average person would need in order to live comfortably and settled on $70,000 a year. In one fell swoop, he dropped his own salary to that amount, while also making it the minimum salary for anyone who worked at Gravity.

The move drew media coverage—and dire predictions from pundits. On Fox News and other conservative outlets he was called "foolish," a "socialist" and a "lunatic of lunatics." Rush Limbaugh called the company policy "pure unadulterated socialism" that was "going to fail" and should be a case study in MBA programs on how socialism doesn't work. Talking heads predicted that his employees would end up in the welfare line.

Sharing a video with clips from those outspoken detractors on Twitter, Price wrote:

"6 years ago today I raised my company's min wage to $70k. Fox News called me a socialist whose employees would be on bread lines. Since then our revenue tripled, we're a Harvard Business School case study & our employees had a 10x boom in homes bought.

"Since our $70k min wage was announced 6 years ago today: Our revenue tripled, headcount grew 70 percent, customer base doubled, babies had by staff grew 10x, 70 percent of employees paid down debt, homes bought by employees grew 10x, 401(k) contributions grew 155 percent, [and] turnover dropped in half."

The business is thriving, his employee numbers have grown from 130 to 200, and they've expanded to a second office in Boise, Idaho. And perhaps most notably, the highest-paid employee makes four times the salary of the lowest-paid employee, not 33 times.

The benefits of taking care of his employees extended into the pandemic, which led to the company taking a 55% revenue hit overnight. Rather than lay people off—with Gravity has never done in its 17-year history—Price held a call with his employees and explained the company's situation. He didn't want anyone to lose their job, and he also didn't want to jack up prices on the small businesses that relied on their services.

In response, nearly every employee offered to take a temporary, voluntary pay cut, ranging from 5% to 100%. That's the kind of loyalty money and support can buy. And it worked—those employees have been repaid and the company is now giving out raises.

At the start of the pandemic, we lost 55% of our revenue overnight. Our employees were so invested they volunteered… https://t.co/ob6GtuBofQ
— Dan Price (@Dan Price)1618341454.0

Price is outspoken about his company's success because he believes it's a model other companies should follow if they are able. CEO salaries have risen 940% since 1978, while average worker salaries have only risen 12%. The longer that discrepancy goes on, the more normal it becomes in people's minds, but Price is on a mission to disrupt that norm and convince people that paying employees well pays off in a multitude of ways.


Price says he doesn't miss anything about the millionaire lifestyle he lived prior to his pay cut. "Money buys happiness when you climb out of poverty," he wrote on Twitter. "But going from well-off to very well-off won't make you happier. Doing what you believe is right will."

Investing in people is what Price believes is right, and he's lived that belief—successfully—for six years and counting.

We're doubling down on our mission to invest in employees. Our revenue (which comes from small busienss credit card… https://t.co/5Bdy5FTSje
— Dan Price (@Dan Price)1618417237.0

The pandemic has revealed how much money there truly is at the top, as billionaires got 54% richer over the past year and while millions of people took devastating financial hits, and large company CEOs received huge bonuses while laying off lower-level employees. Let's encourage more corporate leaders to take a page out of Dan Price's book and invest in the people who made them successful in the first place. Those investments can pay off big time, as Price—and now others—have repeatedly proven.

This Wild Video of a Guy Throwing an Attacking...

3 Vegan Girlfriend Demands That Her Boyfriend Get Rid Of...

4 Top 10 Most Gruesome Inventions And Innovations

6 TikTok Made Us Do It: Are These Viral Products Worth It?

8 More than 100 injured as Palestinians and Israeli police...