Funnel, a Swedish startup that’s setting out to help marketers automate their data collection, has raised $47 million in a series B round of funding led by Eight Roads Ventures and F-Prime Capital, with participation from Balderton Capital, Oxx, Zobito, Industrifonden, and Kreos Capital.

The raise comes as digital ad spending in the U.S. exceeds that of traditional “offline” channels, according to some reports, and the major technology platforms are battling for companies’ marketing dollars.

Founded out of Stockholm in 2013, Funnel connects with more than 500 data sources, from LinkedIn and Mailchimp to Salesforce and Shopify. It then automatically cleans, maps, and groups this data before feeding it into a destination of the user’s choice — anything from Tableau to Looker, Microsoft Power BI, or Qlik. It’s all about structuring the data and making it “business ready” for analysis and reports.

Looker, for example, is a big data analytics platform owned by Google that’s designed to help companies extract meaning from their data. To get this data into Looker, Funnel automates the collection and mapping process from whatever sources clients use. Companies can also create custom rules to group data from various sources rather than reporting on each one separately.

Ultimately, Funnel is setting out to create what it calls a “single source of truth” for marketing, sales, and commerce data. It has already garnered some big-name clients over the past seven years, including Samsung, Trivago, Scandinavian Airlines, and Coinbase. 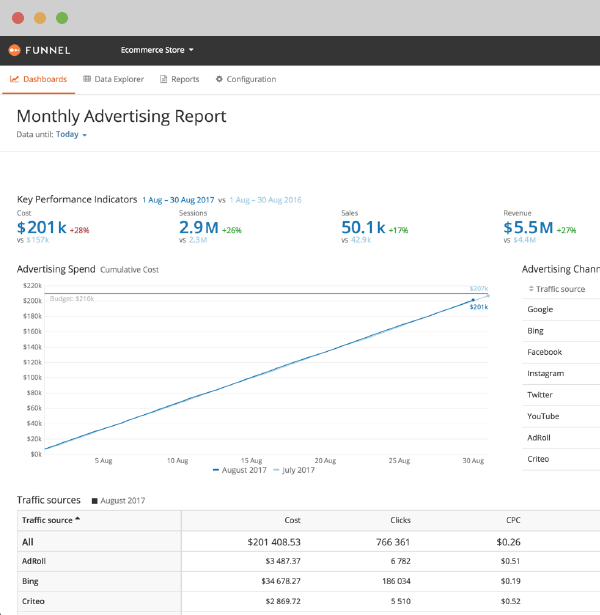 Online marketing and advertising offer many benefits over traditional offline alternatives, insofar as it’s easier to target users and figure out how effective a particular channel is. But with so many marketing tools and platforms, making sense of the swathes of data is a challenge — one Funnel is setting out to solve. It’s all about helping companies justify and report their spending, with evidence to support their decisions.

Funnel had previously raised around $21 million, and with another $47 million in the bank it plans to double down on expansion plans for the U.S. and help meet demand in other existing markets. The company opened an office in Boston back in 2016, and it recently committed to new office spaces in both the U.S. and Sweden that could see its head count jump from 140 to 400.

China's population now over 1.4 billion as...