Germany and France were bracing for new lockdowns Wednesday, as governments sought to stop the fast-rising tide of coronavirus cases beginning to fill European hospitals.

French markets opened lower on expectations that President Emmanuel Macron would announce tough measures during a televised evening address to the nation.

Doctors in France have been calling on the government to impose a new nationwide lockdown, noting more than half the country's intensive care units are occupied by COVID-19 patients, and medical staff are under increasing strains.

On a map representing COVID-19 cases from the European Centre for Disease Prevention and Control, most parts of France were coloured deep red, signifying more than 240 cases per 100,000 people in the past two weeks. The number of daily deaths from the virus spiked Tuesday, with 523 new deaths and another 33,417 new infections.

Belgium, the Netherlands, most of Spain and the Czech Republic were showing similarly high rates of infection.

Germany was still coloured in orange, indicating that the average number of new cases there is still under 120 per 100,000 over the last 14 days.

Still, German Chancellor Angela Merkel was pressing governors of the country's 16 states to quickly agree a partial lockdown that could include further restrictions on public gatherings and the closure of bars and restaurants.

The plan has caused anguish in Germany's hospitality industry, with thousands of venue owners staging a protest Wednesday at Berlin's landmark Brandenburg Gate to demand further financial support from the government. 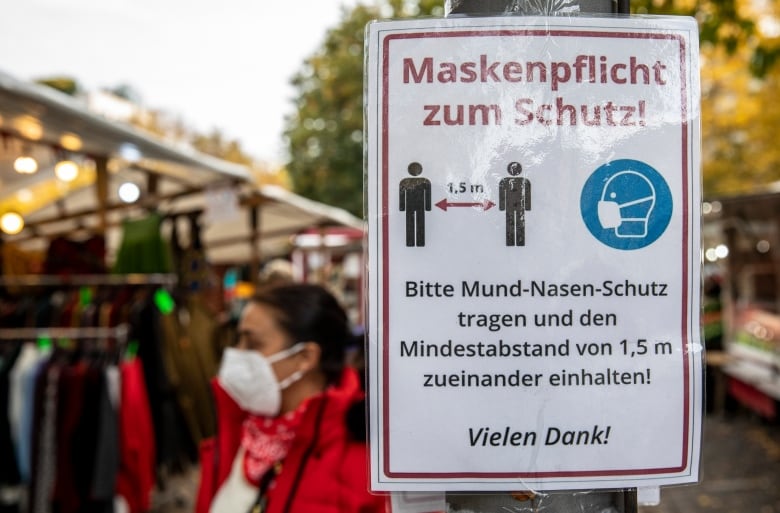 People wear protective masks as they shop at an outside market in the Neukoelln district on Tuesday in Berlin. (Maja Hitij/Getty Images)

While Germany has fared better than many of its neighbouring European countries during the pandemic, officials warn that it, too, is beginning to lose control of the situation.

"A national lockdown, as we have seen in, ravages an economy and would add significant complications to the ongoing economic recovery," said Fiona Cincotta, an analyst at online trading firm GAIN Capital. 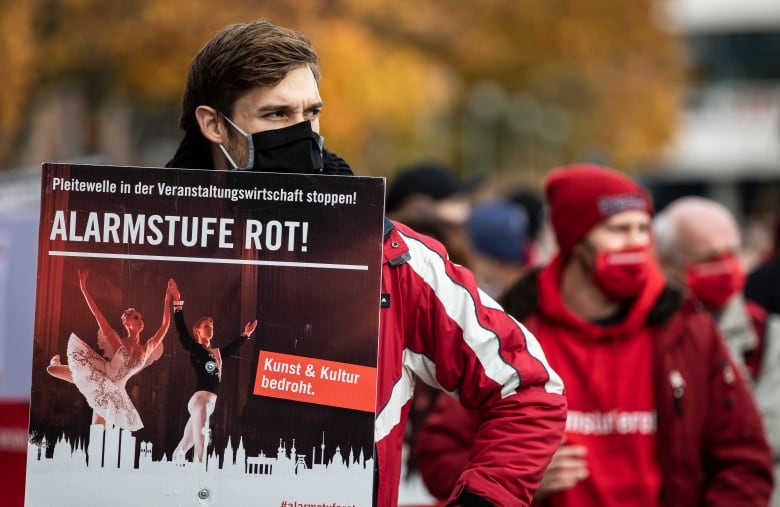 Employees of events companies gather at Alexanderplatz to demand government assistance during the second wave of the coronavirus pandemic in Berlin. (Maja Hitji/Getty Images)

"One doesn't need to be a virologist to conclude that, without further restrictions, the number of new daily infections will likely rise," said Gitzel, adding that a short, strict lockdown could be effective. "The strict containment measures in March and April laid the ground for an economically successful summer."

Officials in Germany have cited the failure by authorities in the neighbouring Czech Republic to maintain their springtime successes against the virus, saying they opened too widely in the summer.

The Czech Health Ministry said the country's day-to-day case increase hit a new record high of 15,663 Tuesday — as many as Germany, which has eight times the population.

The Czech government has further tightened its regulations, imposing a nationwide curfew between 9 p.m and 6 a.m. that started Wednesday. It previously limited free movement, closed stores, schools and restaurants, made it mandatory to wear face masks indoors and outdoors and banned sport competitions, but the number of infections has continued to rise.

Several demonstrations against the virus restrictions were planned for Wednesday in the capital of Prague.

Wales has opted for that short, sharp approach, with a 17-day lockdown during which people cannot even drive out of their region to England. Even Sweden, which avoided a national lockdown and generally imposed far lighter measures than other European countries, is now urging people to avoid shopping centres and shops and stay away from public transportation.

The World Health Organization (WHO) said more than two million confirmed coronavirus cases were reported last week — the shortest time ever for such an exponential increase.

It said for the second consecutive week, the European region accounted for the biggest proportion of new cases, with more than 1.3 million cases or about 46 per cent of the worldwide total. The UN health agency said deaths were also on the rise in Europe, with about a 35 per cent spike since the previous week. Overall, Europe has seen more than 250,000 virus-related deaths, according to a tally by the Balitimore-based Johns Hopkins University.

The WHO also noted that hospitalizations and ICU occupancy due to COVID-19 increased in 21 countries across Europe.

Hurricane Zeta speeding toward a storm-weary...

6 The Weeknd takes to the streets of Los Angeles to perform...

7 Katy Perry shares baby snap of herself with her dad and...

9 Sophia Loren’s Return To Movies In ‘The Life Ahead’...