Tania Alexander, a 12-year Studio Lambert executive who oversees Gogglebox, is leaving the All3Media-owned producer. The director of factual entertainment’s somewhat abrupt departure comes part-way through Gogglebox’s current series on Channel 4, during which it has chalked up some record audiences. Studio Lambert said Alexander is leaving to pursue fresh challenges, with a spokeswoman adding: “We wish Tania success with her future projects.​​” Studio Lambert’s deputy creative director, Mike Cotton, will oversee the remainder of Season 16 of Gogglebox, alongside the show’s executive producer Leon Campbell.

Women in Film and Television UK (WFTV) has appointed Katie Bailiff as CEO. Bailiff joins from TV firm Century Films, where she has worked for two decades. Her credits as an executive producer include TV shows Feltham Sings, The Secret History Of Our Streets, Abused By My Girlfriend, Lifers and Camila’s Kids Company: The Inside Story. She was recently an executive producer on Terms And Conditions: A UK Drill Story for YouTube Originals.

101 Films and (Yet) Another Distribution Company Ink JV 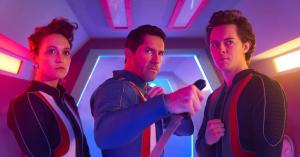 101 Films has inked a deal with recently launched indie distributor (Yet) Another Distribution Company. The home ent JV sees 101 Films handling sales, distribution and marketing on releases while (Yet) Another Distribution Company will handle acquisitions. Publicity will be handled by Aim Publicity. YADC was launched this year by Head Gear and Bankside founder Phil Hunt (who also has new label Bohemia Media). The initial slate of releases includes Cup of Cheer and sci-fi comedy The Intergalactic Adventures of Max Cloud with Scott Adkins, John Hannah, Isabelle Allen and Lashana Lynch. Other titles on the slate will include Riot Girls, Paradise Z and Last Moment of Clarity.

The Original Jaws Shark Robot Has Been...

Germany’s Cinemas To Remain Closed Until At...