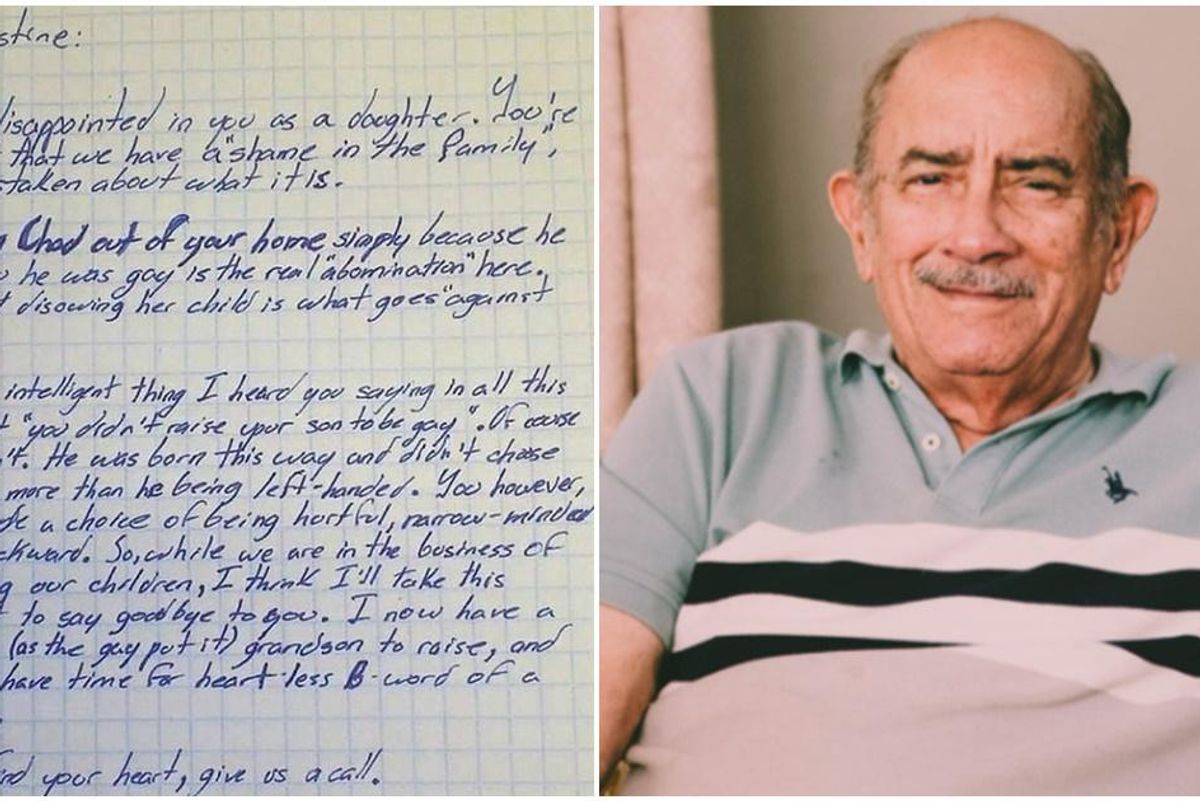 Eight years a go, a grandfather in Michigan wrote a powerful letter to his daughter after she kicked out her son out of the house for being gay. It's so perfectly written that it crops up on social media every so often.

The letter is beautiful because it's written by a man who may not be with the times, but his heart is in the right place.

It first appeared on the Facebook page FCKH8 and a representative told Gawker that the letter was given to them by Chad, the 16-year-old boy referenced in the letter.

In the letter the grandfather is responding to his daughter Christine, who says her son is a "shame" to the family and an "abomination." She's also suprised that he became gay because she didn't raise him that way.

Given the fact she called him an abomination, she must be a very religious woman. Because men who "lie" with men are deemed an "abomination" in The Bible. But one should take that with a grain of salt because in the same chapter, eating shellfish is an abomination as well.

Here is the letter in full:

I'm disappointed in you as a daughter. You're correct that we have a shame in the family, but mistaken about what it is.

Kicking Chad out of your home simply because he told you he was gay is the real 'abomination' here. A parent disow[n]ing her child is what goes 'against nature'.

The only intelligent thing I heard you saying in all this was that 'you didn't raise your son to be gay'. Of course you didn't. He was born this way and didn't choose it any more than he being left-handed. You however have made the choice of being hurtful, narrow-minded and backward. So, while we are in the business of [disowning] our children, I think I'll take this moment to say goodbye to you. I now have a fabulous (as the gay put it) grandson to raise and I don't have time for heartless B-word of a daughter.

I[f] you find your heart, give us a call.

The grandfather's letter shows true moral clarity. He can't believe that she is abdicating her responsibility as a parent just because her son is gay, an orientation that wasn't even his choice. He then turns the tables on her by doing to her what she did to her son.

"So, while we are in the business of [disowning] our children, I think I'll take this moment to say goodbye to you," he writes. He then shows he has some passing familiarity with gay culture by refering to his grandson as "fabulous." That's pretty progressive for a grandfather in 2013.

The identities of the teen and his grandfather have never been revealed, but they know the letter received a lot of support. A representative from FCKH8 said that, at the time, the grandfather and grandson refused to do any interviews about the letter because the teenage boy had yet to come out of the closet.

Sikh hikers used their turbans to save a man...