Harvard University and the Massachusetts Institute of Technology sued the Trump administration on Wednesday, seeking to block a new rule that would bar foreign students from remaining in the United States if their universities move all courses online due to the coronavirus pandemic.

The two universities filed a lawsuit in federal court in Boston asking for an emergency temporary restraining order on the new directive issued by the government on Monday.

The lawsuit, filed by two of the most elite U.S. universities, is the first to challenge the order that could force tens of thousands of foreign students to leave the country if their schools switch fully to remote learning.

Harvard had announced it would hold all classes online in the coming fall term. The university says the directive would prevent many of its 5,000 international students from remaining in the U.S.

Massachusetts Attorney General Maura Healey said in a statement it was also planning to sue over the rule, which she called "cruel" and "illegal."

Her office said it was still working out the details of any potential legal action but that it had been in touch with Harvard and other major colleges and universities in the state to "support their efforts to protect students."

In a statement, the U.S. State Department said that while international students are welcome in the U.S., the policy "provides greater flexibility for non-immigrant students to continue their education in the United States, while also allowing for proper social distancing on open and operating campuses across America."

U.S. President Donald Trump is pushing schools across the country to reopen in the fall.

The Trump administration's announcement blindsided academic institutions grappling with the logistical challenges of safely resuming classes as the coronavirus pandemic continues unabated around the world and surges in the U.S., especially among young people. 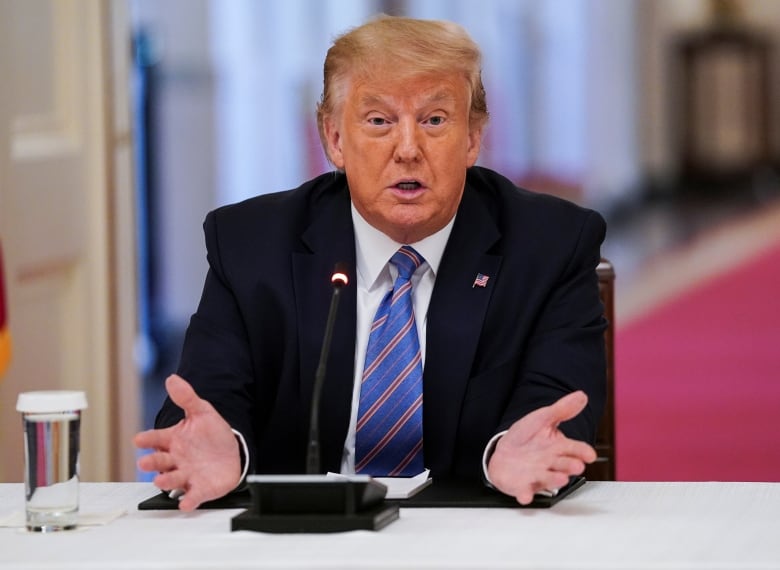 President Donald Trump is pushing schools across the U.S. to reopen in the fall, as the coronavirus pandemic surges in the country, especially among young people. (Kevin Lamarque/Reuters)

The U.S. Immigration and Customs Enforcement (ICE) agency rule said most students on F-1 and M-1 visas could stay if their programs were in person or offered a mix of online and in-person instruction.

The announcement left students, professors, and universities scrambling to figure out exactly who would be affected by the rule and how those affected could comply without having to leave the country. On Twitter, professors across the country offered to teach outdoor in-person independent study courses for affected students.

I will teach in person outdoor classes for international students all damn year if I have to to keep their Visa status. Parkas. Bonfires on the quad. I don't want to teach in person but if I can keep people from being deported?—@tlecaque
I have chosen to teach online in the Fall, but I will happily teach outdoor classes 6 feet apart for international students, or do in person independent studies Over and above my current course load. We will resist. @montclairstateu https://t.co/trbpZLprR6—@tdaftarykapur

The ICE policy change marked an unexpected reversal of exceptions to the rules limiting online learning for foreign students when colleges and universities in March rushed to shutter campuses and move to virtual classes as the pandemic forced lockdowns.

ICE "proceeded without any indication of having considered the health of students, faculty, university staff, or communities," the complaint said.

The suit alleges the government skirted the proper rulemaking process and is asking the court to strike it down.

Judge Allison Burroughs, appointed by former president Barack Obama, is assigned to hear the case. In 2017, she ordered a halt to Trump's travel ban on several Muslim-majority countries, a policy that was eventually upheld by the U.S. Supreme Court.

Olivia Culpo teams her bikini with over $23K in...

4 WHO Seeks $76 Million For Lebanon After Beirut Blast,...