Home /
News /
Here's what our ancient cousins the Denisovans looked like

Here's what our ancient cousins the Denisovans looked like

Scientists say they've deciphered features of the skull and some other details of a mysterious extinct cousin of Neanderthals by analyzing its DNA.

The genetic material came from the finger bone of a female member of the Denisovans, a population known mostly from small bone fragments and teeth recovered in Siberia's Denisova Cave.

Denisovans may have occupied that cave from more than 200,000 years ago to around 50,000 years ago. Recently, a Denisovan jaw fragment at least 16,000 years old was reported from in China. But that still gave scientists very little sign of what Denisovans looked like.

Modern-day people did not evolve from Denisovans or Neanderthals, although our species interbred with both and picked up genetic markers that are still detectable in some populations.

The new work used DNA data from two Neanderthals and five ancient and 55 present-day members of our own species, as well as five chimps, in addition to the Denisovan finger bone. Results were reported Thursday in the journal Cell by Liran Carmel of the Hebrew University of Jerusalem and others.

They looked for differences in activity levels for specific genes that could affect anatomical traits, which in turn hinted at differences in appearance for those traits. They identified 32 traits that gave clues to the Denisovan skeleton.

As expected, most were shared with Neanderthals, including robust jaws, a low forehead, a large ribcage and a wide pelvis. 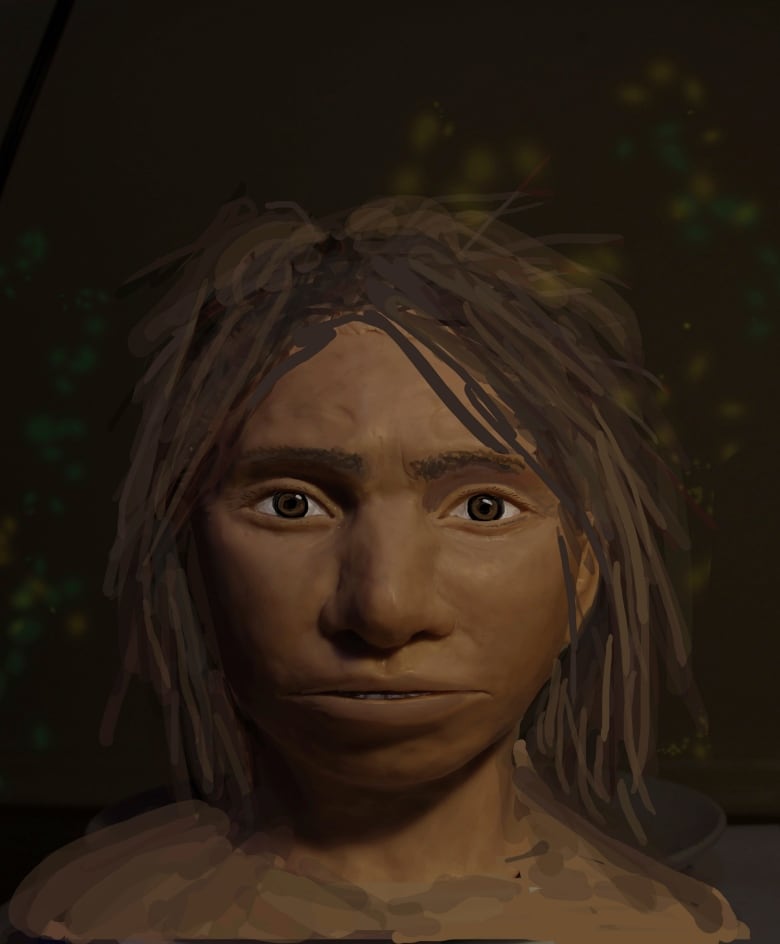 This image provided by Hebrew University of Jerusalem shows a preliminary portrait of a juvenile female Denisovan based on a skeletal profile reconstructed from ancient DNA methylation maps. The renderings that include skin and hair from the profile skeletal profile are not part of the study itself, but rather are based on the study results. (Maayan Harel/Hebrew University of Jerusalem via AP)

Such DNA analysis can teach scientists about how our forerunners evolved and how their development differed, Carmel said in an email.

Experts not connected to the work were impressed.

While it's impossible to know how accurately the study estimated Denisovan traits, its approach is "brilliant and original," said Benedikt Hallgrimsson, of the University of Calgary.

Once the appropriate fossils are found, the study's specific predictions can be tested, said Hallgrimsson, who studies evolutionary aspects of how genes influence physical traits in mammals.

Bence Viola of the University of Toronto, who studies Denisovan fossils, called the work "a huge step forward.… This would have been called science fiction five years ago."

The overall picture it gives of the anatomy is "invaluable," although some details are probably incorrect, he said.

Viola said he was skeptical about an artist's renderings that added skin, eyes and hair to the skull produced by the study. Scientists don't know enough about Denisovans to ensure such renderings are accurate, he said.

Carmel, who commissioned the renderings, said they were as anatomically precise as possible but necessarily "also represent some artistic interpretations."

Houston, other parts of Texas besieged by...