Hirokazu Kore-eda Finds a Powerful Intimacy in ‘The Truth’ 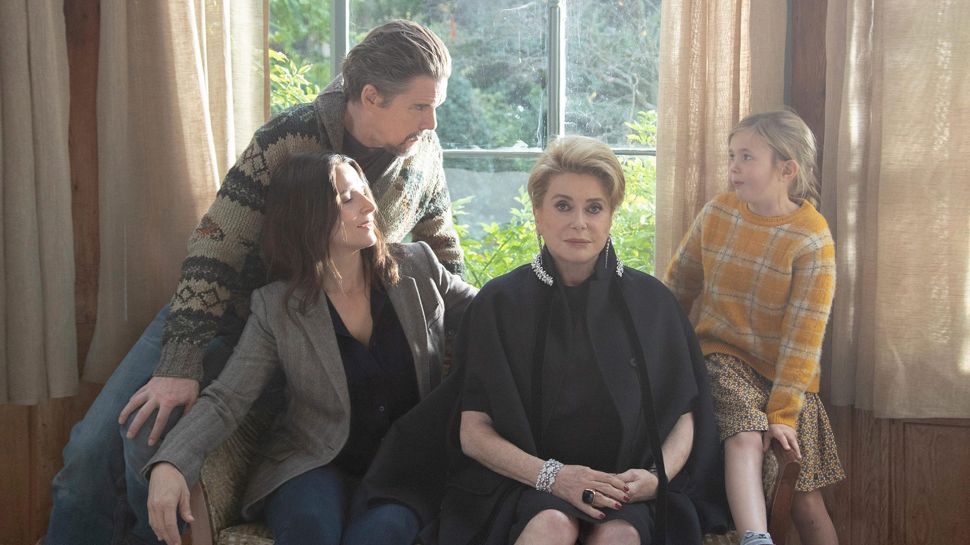 What do we do with aging movie stars, forever trapped as they are in cracked versions of their former perfection?

Often, particularly when the star in question is a woman, we ignore them altogether. When feeling generous, we might bask in the tall tales they spin in unreliable biographies or smoke-clouded interviews detailing past glories. Perhaps the lies they tell are myths revealing some greater truth about themselves; more likely, they are simply lies.

In The Truth, the master Japanese filmmaker Hirokazu Kore-eda uses the strange, false yet somehow all-too-real intimacy filmgoers share with the legendary screen actors we love to explore many of the questions about connection, deception and responsibility that have informed his beloved works, including 2016’s After the Storm and 2018’s Shoplifters. The result is a film—Kore-eda’s first outside of his native country and language—that feels almost aggressively low-key, low stakes and notably less urgent than the filmmaker’s earlier works.

But it is also vital, deeply nuanced and shows its director to be an unmatched master at spinning seemingly contrasting dualities simultaneously—sweetness and cynicism, love and hate, truth and lies, light comedy and deep sadness—no matter the language or setting. But the most profound gift Kore-eda offers forth with The Truth is an ideal platform for the wondrous talents of Catherine Deneuve, cinema’s ultimate belle de jour, now in the autumn of her nights.

She plays two-time César-winning actress Fabienne (Deneuve has also won twice and her given middle name is Fabienne), whose beauty and resentments are both preserved in a secret amber known only to French actors of a certain age. As a one-time screen legend who is seemingly on the last lap of her career—Fabienne is peddling a self-aggrandizing memoir and playing second fiddle to a rising star in a low-budget, art-house sci-fi—Deneuve is at her most imperious and vulnerable. As imposing on screen as she was in career-defining works from Demy, Truffaut and Buñuel, she is at once inscrutable and completely exposed.

Juliette Binoche plays Lumir, Fabienne’s daughter, a writer who has returned to her childhood home to celebrate her mother’s book—and also slice apart its questionable truths with an ink pen. She is accompanied by husband Hank (Ethan Hawke), a middling TV actor with a drinking problem and a childish nature, and Charlotte (Clémentine Grenier), their daughter—and an impish pawn in a battle of wills between Lumir and Fabienne. Even in a movie featuring a troika of screen icons, the film’s most transcendent performance comes from young Grenier, who fills every scene she is in with a playful mix of curiosity and conniving that matches her director’s.

There’s not a lot of action in the film; because of the way Deneuve so deftly yields her screen persona, you never feel invested in her meeting her comeuppance and confronting the truth of her character’s frailties.

Instead, much of the movie’s energy is derived from a sort of metatextual friction—namely the way the main story plays off the movie that Fabienne is making (it’s called, with some irony, Memories of My Mother), and our preexisting cinematic relationship with Deneuve and the other two stars. What we are left with is a postmodern waltz of a film that can feel more like a Criterion Channel footnote commenting on another movie than a full-blown cinematic experience in its own right.

But that in no way means The Truth is not emotionally adroit and affecting. It will especially resonate with people who have an unusually deep connection to and love for cinema or were raised by a showbiz parent more dedicated to crafting an outward facing persona than the ins-and-outs of childrearing. (This critic, it should be noted, checks both boxes.)

Kore-eda’s film, while perhaps a lesser effort by his Olympian standards, is nonetheless a quiet, Gallic gift to these orphans in the dark who are forever sorting through old stories and new movies in an attempt to find beauty in both the truth and the lies.