The dwindling witnesses to the world's first atomic bombing marked its 75th anniversary Thursday, with the mayor and others noting the Japanese government's refusal to sign a nuclear weapons ban treaty.

"I ask the Japanese government to heed the appeal of the [bombing survivors] to sign, ratify and become a party to the Treaty on the Prohibition of Nuclear Weapons," Matsui said. "As the only nation to suffer a nuclear attack, Japan must persuade the global public to unite with the spirit of Hiroshima."

His speech highlights what survivors feel is the hypocrisy of Japan's government, which hosts 50,000 American troops and is protected by the U.S. nuclear umbrella. Tokyo has not signed the nuclear weapons ban treaty adopted in 2017, despite its non-nuclear pledge, a failure to act that atomic bombing survivors and pacifist groups call insincere. 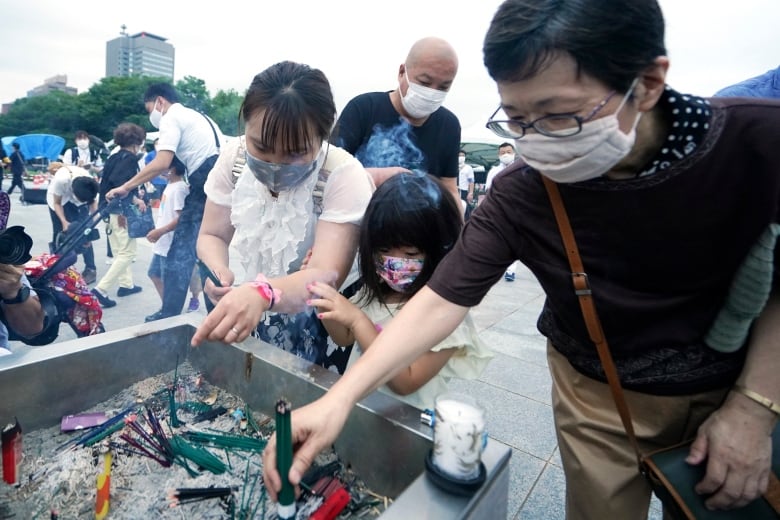 People burn joss sticks in front of the cenotaph for the bombing victims before the start of the ceremony. (Eugene Hoshiko/The Associated Press)

The U.S. dropped its first atomic bomb on Hiroshima on Aug. 6, 1945, destroying the city and killing 140,000 people, mostly civilians and including many children. The U.S. dropped a second bomb three days later on Nagasaki, killing another 70,000. Japan surrendered Aug. 15, ending the Second World War and its nearly half-century of aggression in Asia.

Survivors, their relatives and other participants marked the 8:15 a.m. blast anniversary Thursday with a minute of silence.

Thursday's peace ceremony at the Hiroshima Peace Memorial Park was scaled down, with the number of attendants reduced to fewer than 1,000, or one-tenth of past years, because of the coronavirus pandemic.

Some survivors and their relatives visited and prayed at the park's cenotaph hours before the ceremony began. The registry of the atomic bombing victims is stored at the cenotaph, whose inscription reads: "Let all the souls here rest in peace for we shall not repeat the mistake." 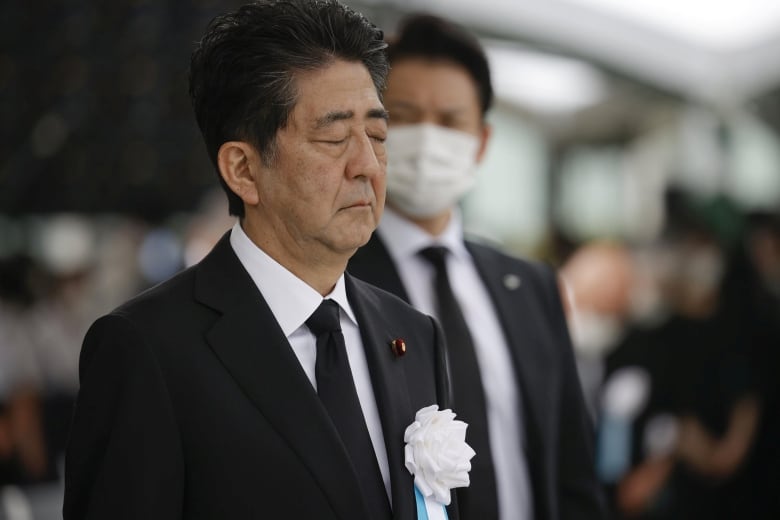 Japan's Prime Minister Shinzo Abe offers a silent prayer for the victims of the bombing. (Kyodo/Reuters)

An aging group of survivors, known as hibakusha, feel a growing urgency to tell their stories, in hopes of reaching a younger generation.

They expressed anger over what they said was the Japanese government's reluctance to help and listen to those who suffered from the atomic bombing. Visitors observe a minute of silence for the victims of the atomic bombing at 8:15 a.m., the time the bomb exploded over the city in 1945. (Eugene Hoshiko/The Associated Press)

"Many survivors are offended by the prime minister of this country who does not sign the nuclear weapons prohibition treaty," said Keiko Ogura, 84, who survived the atomic bombing at age eight. "We need non-nuclear states to help us and pressure the Japanese government into signing."

Matsui urged world leaders, especially those from nuclear weapons states, to visit Hiroshima and see the reality of the atomic bombing.

Seth Meyers Drags Trump’s COVID-19 Downplay, Says President Is A “Deeply Disturbed Individual With No Regard For Human Life”

4 Metropolis by Ben Wilson - review: a new history of humanity

6 NVIDIA apologizes for RTX 3090 pre-orders before they...

7 Reality and Other Stories by John Lanchester - review:...