HONG KONG (Reuters) - Hong Kong protesters shot arrows and hurled petrol bombs from a barricaded university on Sunday at police who fired tear gas and water cannon in some of the worst violence in the Chinese-ruled city since anti-government unrest erupted five months ago.

Several protesters took up positions on the rooftops of Hong Kong Polytechnic University, armed with bows and arrows, as unrest spread across the territory’s central Kowloon district.

Police said a media liaison officer was treated in hospital after being hit by an arrow in the leg and another officer’s visor was struck by a metal ball although he was not hurt. 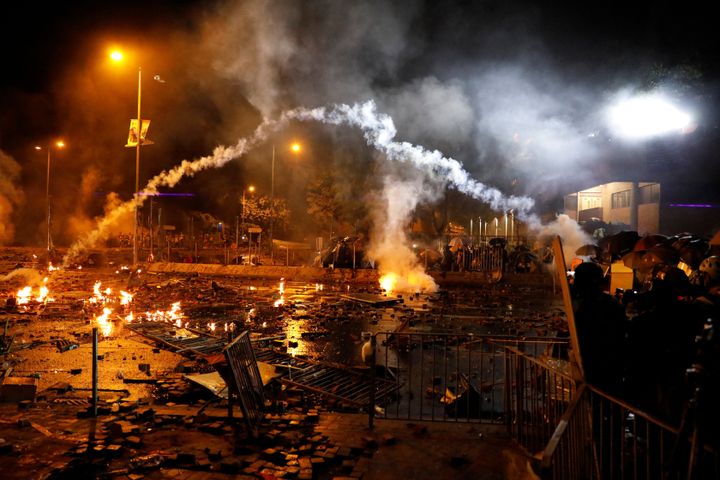 Protesters, who were sprayed with the blue liquid from water cannon, stripped off and hosed each other down to wash it off.

Police fired tear gas to try to break up protests on Nathan Road, a major thoroughfare in Kowloon’s Mong Kok district, which was strewn with loose bricks, and in Yau Ma Tei district, where successive volleys of gas canisters temporarily cleared the streets. Clashes intensified during the night.

“Rioters continue to launch hard objects and petrol bombs with large catapults at police officers,” police said in a statement. “Police warn that the violent activities in the Hong Kong Polytechnic University have escalated to rioting.” 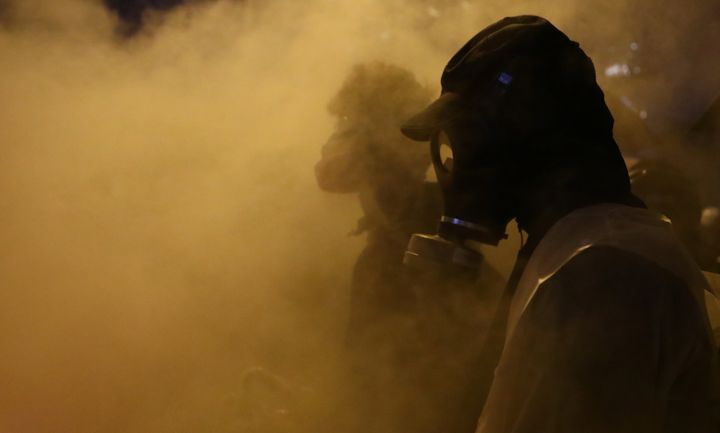 Chinese soldiers in a base close to the university were seen monitoring developments with binoculars, some dressed in riot gear with canisters on their chests, Reuters witnesses reported.

Chinese troops in shorts and T-shirts, some carrying red plastic buckets or brooms, had emerged from their barracks on Saturday in a rare public appearance to help clean up debris.

The presence of China’s People’s Liberation Army (PLA) soldiers on the streets, even to clean up, risks stoking controversy about Hong Kong’s status as an autonomous area. 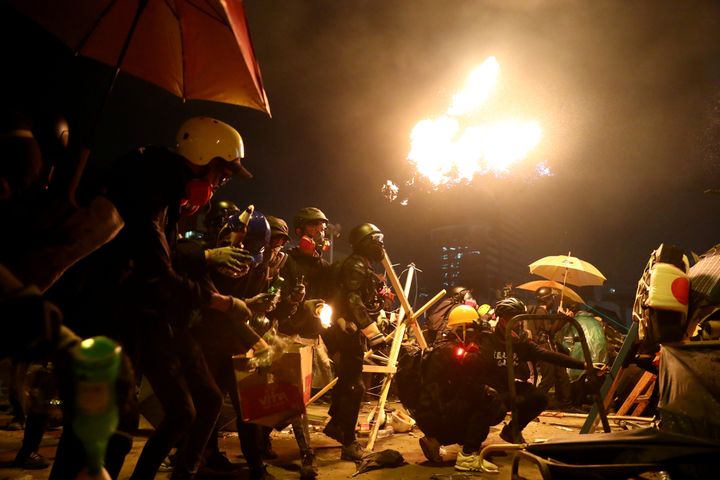 Protesters are angry at perceived Communist Party meddling in the territory, whose freedoms were guaranteed when it returned to Chinese rule in 1997. Beijing denies interfering and has blamed foreign influences for the unrest.

Huge fires had lit up the sky at the Hong Kong Polytechnic University on Saturday night and into Sunday morning after protesters threw petrol bombs. In the university courtyard, Joris, 23, said students fired arrows to protect themselves.

“The protesters have been reacting to the police. We haven’t fought back as much as we could. I would be prepared for jail. We are fighting for Hong Kong,” the civil engineer told Reuters.

The campus is the last of five universities to be occupied by activists, who have used the site as a base to block the Cross Harbour tunnel, which connects Kowloon to Hong Kong island.

A police truck, deployed to clear the bridge above the tunnel, retreated in reverse after being set ablaze. 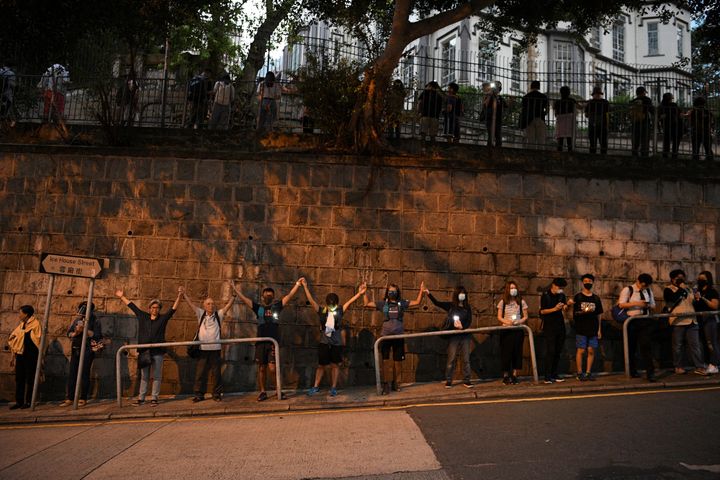 Protesters attend an anti-government march in the district of Central in Hong Kong, China on November 17, 2019. (REUTERS/Laurel Chor)

“We are not afraid,” said third-year student Ah Long, who did not give his full name. “If we don’t persist, we will fail.”

The violence has posed the gravest popular challenge to Chinese President Xi Jinping since he came to power in 2012. Xi has said he is confident Hong Kong’s government can resolve the crisis.

Chinese troops have appeared on Hong Kong’s streets only once since 1997, to help clear up after a typhoon last year.