House Democrats in the U.S. have subpoenaed acting White House Chief of Staff Mick Mulvaney in their impeachment probe, demanding his testimony Friday as they wrap up closed-door interviews and move into a public phase of the investigation.

Despite the late-night subpoena, Mulvaney isn't expected to appear for the interview Democrats have scheduled. The White House instructed its officials not to comply with the investigation, which is looking at U.S. President Donald Trump's dealings with Ukraine.

An official working on the inquiry said the House intelligence panel subpoenaed Mulvaney because other testimony indicated he "could shed additional light on the president's abuse of the power of his office for his personal gain."

The person declined to be identified in order to discuss the confidential subpoena. 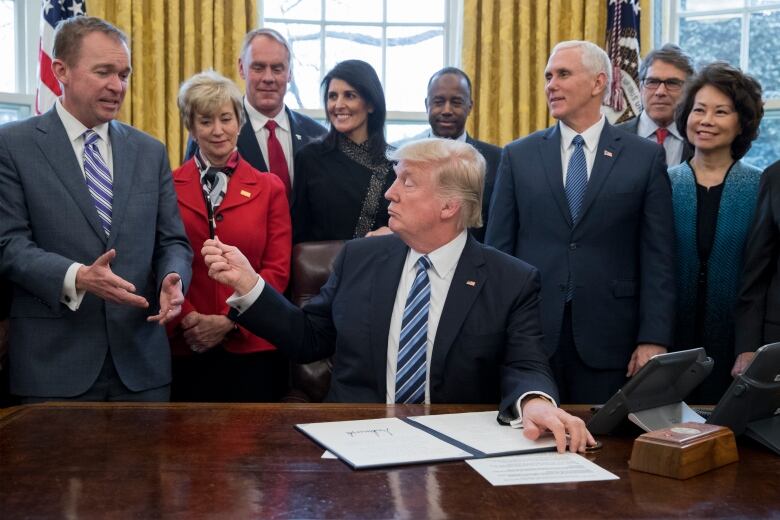 Trump hands his pen to Mulvaney in 2017. Mulvaney isn't expected to appear despite the subpoena. (Michael Reynolds/Getty Images)

Mulvaney said in a news conference last month that the Trump administration's decision to hold up military aid was linked to Trump's demand for the investigations. He later walked back his remarks, but Democrats said that was tantamount to a confession and have cited it as evidence in their inquiry.

The subpoena comes after former national security adviser John Bolton failed to appear for an interview Thursday. Democrats say they will use the no-shows as evidence of the president's obstruction of Congress.

High-profile witnesses have been no-shows

Even though some of the most high-profile witnesses have failed to appear — Energy Secretary Rick Perry also declined to show up this week — Democrats have indicated they think they already have ample testimony about Trump's conduct on Ukraine. A slew of current and former officials from the State Department and White House have appeared over the last several weeks and largely corroborated the same narrative — that Trump had delegated his lawyer, Rudy Giuliani, to guide U.S.-Ukraine policy and that the two men were focused on pressuring Ukraine as the administration withheld military aid from the country.

One Democratic member of the intelligence panel, Washington Rep. Denny Heck, said Thursday that there is "already a mountain of evidence" in the probe.

"I think there's more evidence to the effect that the president shook down Ukraine, tried to cover it up, and threatened to and then withheld security assistance to Ukraine than there is evidence that the sun will come up in the east tomorrow," Heck said. 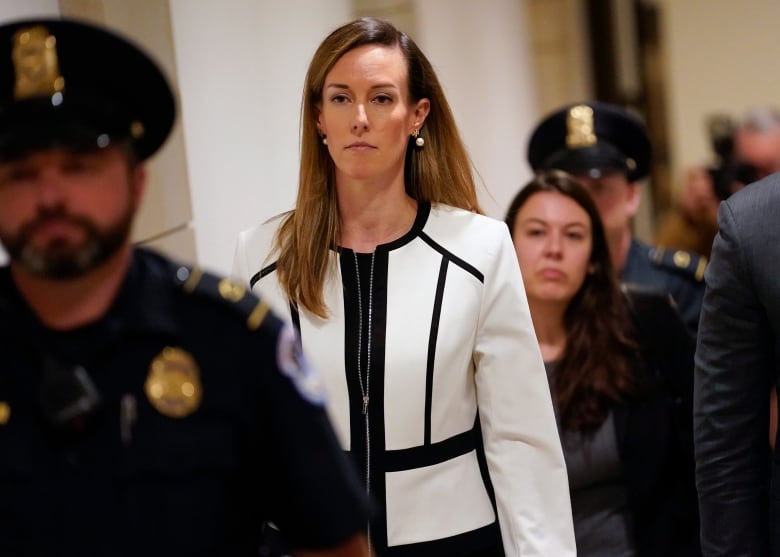 Jennifer Williams, a special adviser to Vice-President Mike Pence for Europe and Russia, departs after a closed-door interview in the impeachment inquiry. (J. Scott Applewhite/Associated Press)

And witnesses have continued to come in. On Thursday, an aide to Vice-President Mike Pence appeared under subpoena and was deposed for more than four hours.

Jennifer Williams, a career foreign service officer detailed to Pence's office from the State Department, was one of several White House aides who were listening in on a July phone call between Trump and Ukraine President Volodymyr Zelenskiy in which Trump asked the new leader for the investigations, according to an administration official who requested anonymity to discuss the conversation.

That call, in which Trump asked Zelenskiy to investigate political rival Joe Biden and his family as well as Ukraine's role in the 2016 U.S. presidential election, is at the centre of the impeachment probe.

Though Trump has said there was no "quid pro quo," several of the witnesses, including top Ukraine diplomat William Taylor, have testified that it was their understanding that Ukraine would not receive military assistance or a coveted Oval Office visit until it met the president's demands. A transcript of Taylor's closed-door deposition was released publicly Wednesday.

Lawmakers leaving Williams' deposition said her testimony lined up with the accounts of others.

"It just never ceases to amaze me how all of these people in every material aspect corroborate one another," Heck said.

'The president did nothing wrong'

Republican Rep. Mark Meadows of North Carolina said Williams was asked about Pence's September visit to Warsaw, Poland, where he met Zelinskiy. Pence has said he and the Ukrainian president did not discuss Biden during their closed-door meeting, but they did discuss the White House's decision to halt security aid meant to counter Russian aggression.

Speaking to reporters in New Hampshire on Thursday, Pence stood by Trump and said if Americans read the administration's rough transcript of the call they will find "there was no quid pro quo, the president did nothing wrong." Pence called the impeachment inquiry a "disgrace."

Investigators are wrapping up the private interviews as they prepare to start public hearings next week. House intelligence committee chair Adam Schiff announced Wednesday that three State Department witnesses will appear in two hearings next Wednesday and Friday: Taylor, career department official George Kent and Marie Yovanovitch, the former U.S. ambassador to Ukraine. Yovanovitch was ousted in May on Trump's orders and Taylor replaced her; both have testified about their concerns with the administration's policy on Ukraine.

After the 100,000th death from COVID-19, Joe Biden delivered a solemn but hopeful message to Americans