Home /
News /
How mail-in voting could delay results in the U.S. election for days — or weeks

How mail-in voting could delay results in the U.S. election for days — or weeks

For most of us, 2020 has brought an endless supply of first-time experiences and never-before-seen events, all because of the coronavirus. The U.S. election on Nov. 3 will be no exception.

The pandemic and concerns around voting in person are believed to be driving more Americans than ever to vote by mail.

At least 70 million Americans have already cast ballots — a record — and about two thirds of them by mail, including in key battleground states.

In Wisconsin, more than five times as many mail-in ballots have been cast compared with the number in 2016. North Carolina has seen nearly triple the number of mail-in votes so far. For the first time, voters in many states can cite the coronavirus as a reason to vote absentee by mail, or they can choose to cast absentee ballots without giving any reason at all. 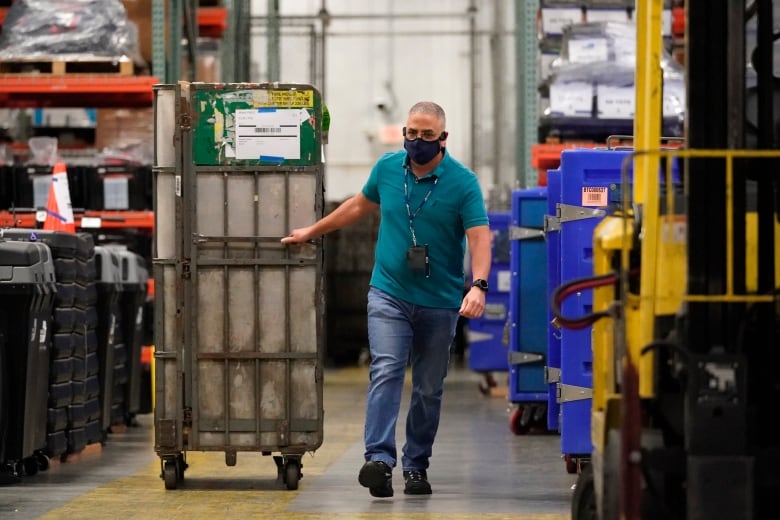 A Miami-Dade County elections department employee takes a cart of mail-in ballots to be loaded onto a truck for transport to a local United States Postal Service office on Oct. 1, 2020, in Doral, Fla. (Wilfredo Lee/The Associated Press)

More than two dozen states have also modified their absentee/mail-in voting rules in response to the pandemic, making it easier to vote by mail. This includes everything from automatically sending out ballots to all eligible voters — whether they have requested them or not — to extending the deadline for receiving mail-in ballots.

Add to the mix the fact that every state — and in some cases, counties within those states — has different rules about processing and counting mail-in ballots. Many will not have a final count on election night.

In some cases, ballots don't even need to arrive until several days after Nov. 3 to be included in the official count.

It could all add up to a very long vote-counting process, lasting days or even weeks, if the election is close.

Here's what you need to know about mail-in ballots ahead of Nov. 3.

What is mail-in voting?

"Mail-in voting" is a bit of a blanket term. In the United States in 2020, it can mean any of of the following things:

Five states have universal mail-in voting. Colorado, Hawaii, Oregon, Utah and Washington regularly mail out ballots to all registered voters and did so before COVID-19. They are generally the states with the best practices around mail-in voting because of their experience in handling mail-in ballots.

Another four states — California, Nevada, New Jersey and Vermont, plus the District of Columbia — switched to primarily vote-by-mail in 2020 because of the pandemic and automatically sent ballots to all registered voters.

Only five states are still making it challenging for voters to vote by mail in 2020 by requiring a reason to do so, and COVID-19 is not considered a valid one. Those five are Indiana, Louisiana, Mississippi, Tennessee and Texas.

The remaining 36 states are allowing voters to request mail ballots with no excuse necessary. This is often called absentee balloting — where the voter must proactively request their absentee ballot.

WATCH | What early voting says about the U.S. presidential race:

U.S. political scientist Cal Jilson says up to 60% of total votes could be cast before election day on Nov. 3. 6:38

It's called 'mail-in,' but there are other options 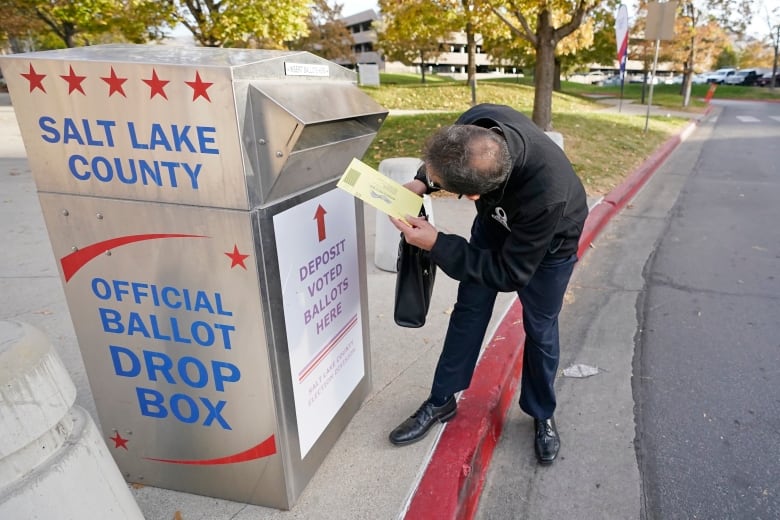 How are mail-in votes counted?

This is where things start to get complicated.

Each state has its own set of rules that govern when and how mail-in ballots are processed and counted. Often, the process begins with a verification of the signature on the ballot envelope to the signature on record to make sure it's a match, according to the National Conference of State Legislatures. Depending on the state, that process can begin anywhere from 29 days to 14 days to three days before election day — or not until election day itself. Counting can only be done after a ballot is processed. 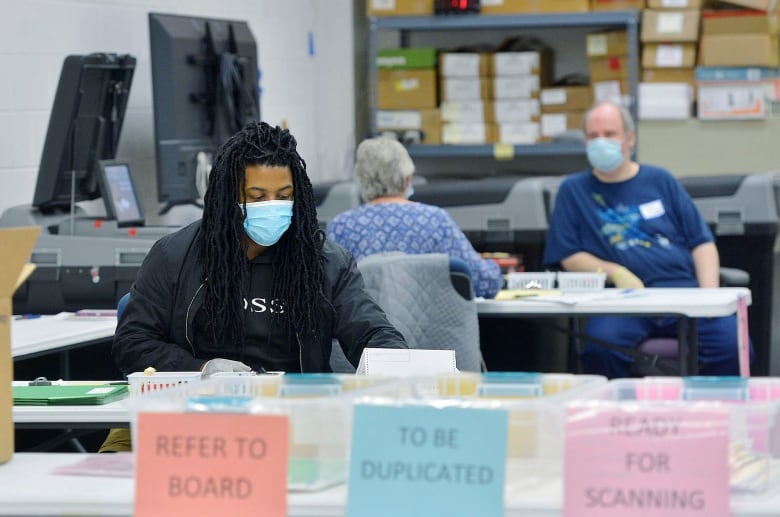 Elections officials in Maryland wear masks and gloves while opening mail-in ballots Oct. 12 in the first canvassing of ballots for the 2020 election. (Colleen McGrath/The Herald-Mail via The Associated Press)

And again, the rules around when ballots can be counted varies according to each state. While no state will divulge results before election day, here is when some key swing states are allowed to begin counting mail-in ballots:

The full list of when ballot-counting can begin by state can be found here.

WATCH | Why some Americans face roadblocks when it comes to voting:

The presidential race in Texas is closer than it’s been for 50 years, but some are concerned about the roadblocks facing many voters, which some consider voter suppression. 4:20

And something else to consider: this race is already regarded as the most litigated in American history, due in large part to the massive expansion of mail and absentee voting.

Loyola Law School professor Justin Levitt, a former U.S. Justice Department elections official, has tallied around 260 lawsuits arising from the coronavirus. The Republication National Committee says it's involved in more than 40 lawsuits, and a website operated by a chief Democrat lawyer lists active cases worth watching in about 15 states.

Which states allow ballots received after election day to be counted?

It's almost an even split. As of this writing, 22 states plus the District of Columbia will count mail-in ballots received after election day, providing they are postmarked on or before Nov. 3. Some states have made changes to their normal laws for the 2020 election because of COVID-19 and the anticipated greater numbers of mail-in ballots. 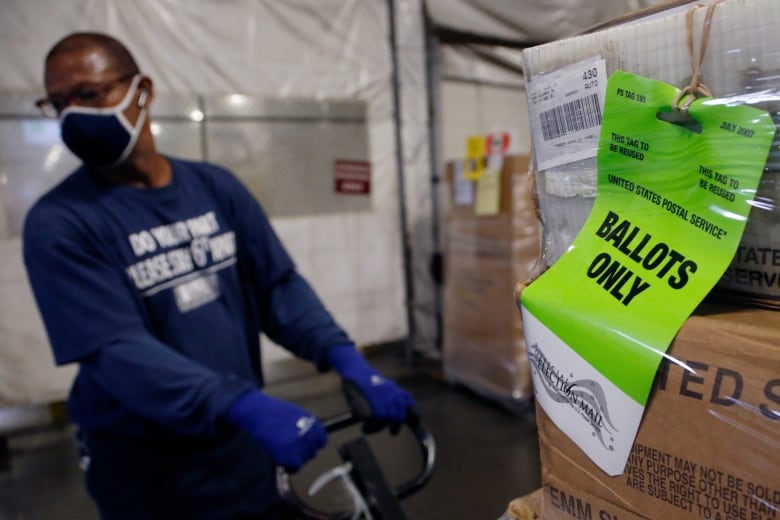 The other 28 states will not accept any mail-in ballots that arrive after Nov. 3, no matter what date they are postmarked.

Some states are still in court over deadlines, suggesting how contentious this issue is with only days to go before the vote.

It's only a big issue in one state right now — but that state is battleground Pennsylvania, so it matters.

Pennsylvania is one of a handful of states that regularly send voters two envelopes to return their ballots for all elections, including primaries or state-level votes. Voters must first put their completed ballot into a so-called secrecy envelope and then put that envelope into an outer addressed envelope before mailing it.

Given the high number of people voting by mail this year, many of the states that use secrecy envelopes are waiving the requirement or say they will count votes without them anyway.

City Commissioner of Philadelphia Lisa Deeley demonstrates how easily ballots can be excluded if they are 'naked,' or not packaged correctly. 0:59

In September, a state court ruled that ballots returned without both envelopes will be dismissed as "naked" and will not be counted.

There is a concern that with half of all Pennsylvania voters expected to vote by mail, as many as 100,000 mailed ballots could be rejected statewide.

Despite sounding somewhat nefarious, ballot harvesting has been around for decades and is legal in 26 states. It basically means that someone else can collect a voter's absentee ballot and deliver it to an official drop-off location.

Initially, only a voter's direct family member could deliver their ballot under the law, but in some states, that has been expanded to allow anyone to do it. About a dozen states limit the number of ballots a person can collect on behalf of others. Parties have used it to encourage people who can't get to polling stations or to a mailbox to vote. 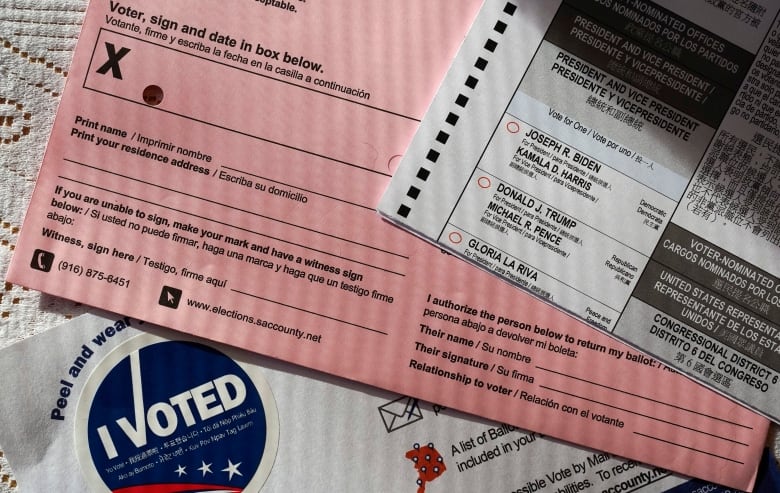 A ballot in Sacramento, Calif., shows the portion where the voter would have to authorize another person to deposit it on their behalf. Allowing someone else to collect a voter's absentee ballot and deliver it to an official drop-off location is known as ballot harvesting. (Rich Pedroncelli/The Associated Press)

Why is it a hot topic in 2020? Well, in California, the state Republican Party used the concept to set up unauthorized "drop boxes" where people could drop off their ballots. State officials said they were illegal and ordered them removed by Oct. 15. The California Republican Party refused, citing the law legalizing ballot harvesting in California.

By Oct. 16, however, California's secretary of state said the state Republican Party removed the unstaffed, unofficial boxes. Republicans confirmed they had yanked boxes that were improperly labelled "official," but said they would change how the boxes were labelled to avoid confusion and continue to use them under the state's ballot harvesting rules.

On Oct. 18, an official ballot drop box was set on fire in Los Angeles, and as many as one hundred ballots were destroyed. The incident is being investigated as arson. 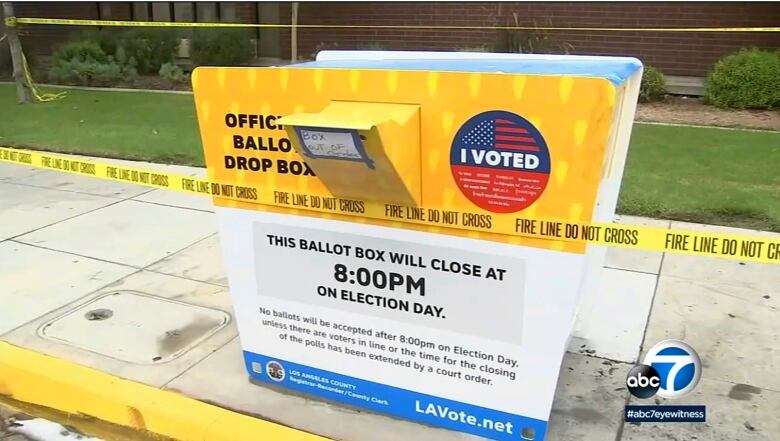 This photo from a video provided by the local ABC affiliate in Los Angeles shows an official ballot drop box on Oct. 19, the morning after it was set on fire in Baldwin Park, Calif. (ABC7 Los Angeles via The Associated Press)

What do you want to know about the U.S. election? Your questions help inform our coverage. Email us at [email protected]