AKCAKALE, Turkey (AP) — Turkish forces approached a key Kurdish-held town in northern Syria on Sunday, setting off clashes that allowed hundreds of Islamic State supporters to escape from a camp for displaced people and prompted U.S. soldiers to withdraw from a nearby base.

A U.S. military official said the situation across northeastern Syria was “deteriorating rapidly” and that American forces were cut off from the Syrian Kurdish fighters they had previously partnered with. The official, who was not authorized to disclose operational details and spoke on condition of anonymity, said U.S. troops on the ground are at risk of being “isolated” and cannot travel overland without a “high risk” of armed confrontation with Turkey-backed forces.

The camp in Ein Eissa, some 35 kilometers (20 miles) south of the border, is home to some 12,000 people, including 1,000 wives and widows of Islamic State fighters and their children. The Kurdish-led administration in northern Syria said in a statement that 950 IS supporters escaped after attacking guards and storming the gates. It was not immediately possible to confirm that figure.

The Britain-based Syrian Observatory for Human Rights said Turkish warplanes struck villages near the camp on Sunday. It said camp residents fled as clashes broke out between Turkey-backed Syrian fighters and Kurdish forces, without providing an exact number. 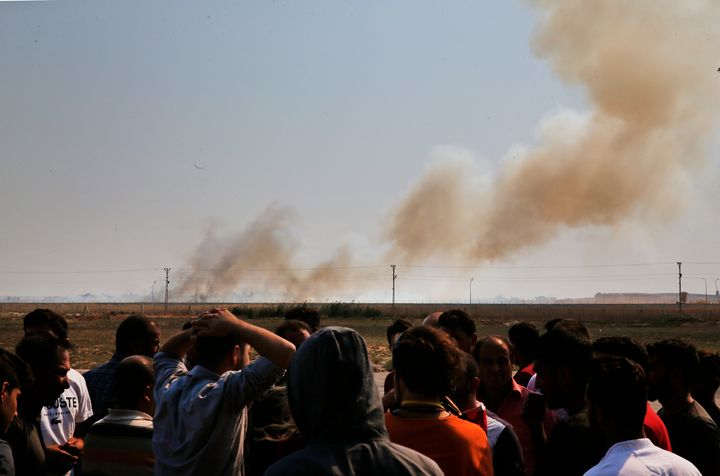 Jelal Ayaf, a senior official at the camp, told local media that 859 people successfully escaped from the section housing foreigners. He said a few were recaptured but that supporters inside the other section of the camp also escaped and were carrying out attacks. He described the situation as “very volatile.”

The U.S. official said a “small group” of American troops withdrew from a base in the town because of the threat posed by Syrian fighters allied with Turkey, but that U.S. forces were still present in larger bases nearby.

The Kurdish-led Syrian Democratic Forces were a key U.S. ally in the war against the Islamic State group and drove the extremists from most of the territory they once held in northeastern Syria. The force swept up thousands of Islamic State fighters and their family members in the campaign, and has warned it may not be able to maintain its various detention centers as it struggles to repel the Turkish advance.

NATO member Turkey views the Kurdish fighters as terrorists because of their links to the insurgency in its southeast and has vowed to carve out a “safe zone” along the border. It launched the operation earlier this week after President Donald Trump moved U.S. forces aside, saying he was committed to getting out of America’s “endless” wars.

The United Nations says more than 130,000 Syrians have fled since the operation began five days ago, including many who had taken refuge from previous rounds of fighting in the country’s eight-year civil war. The fighting reached the main highway that runs between Hassakeh, a major town and logistical hub, and Ein Eissa, the administrative center of the Kurdish-held areas. 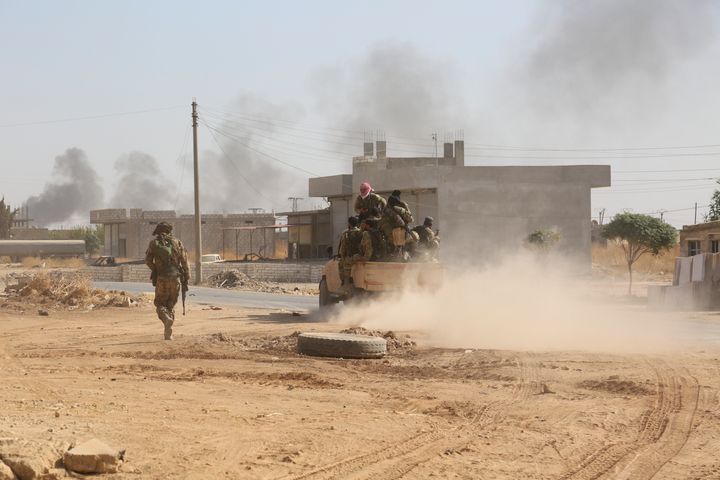 Heavy fighting was also underway Sunday in the town of Suluk, northeast of Ein Eissa. Turkey’s official news agency said Syrian fighters allied with Ankara had captured the town, while Kurdish officials said they were still battling to hold onto it. The Anadolu news agency said Turkey-backed forces had cleared the town center of Suluk, which is located at a strategic crossroads about 10 kilometers (six miles) south of the border.

Turkish troops and their Syrian allies have made steady gains since launching the operation, capturing several northern villages in fighting and bombardment that has killed and wounded dozens of people. The military said it captured the center of the sizable town of Ras al-Ayn Saturday. Turkey continued shelling around the town and sporadic clashes could be heard.

The clashes have spilled across the border, with shells fired from Syria hitting the Turkish border towns of Akcakale and Suruc. Anadolu says one person was wounded in Suruc on Sunday. Cross-border fire has killed 18 civilians in Turkey since the operation began.

Heavy outgoing shelling could be heard in Akcakale early Sunday and at least one incoming projectile hit a house, leaving a gaping hole in the exterior wall and rubble inside. It was not immediately clear if anyone was wounded. Police collected evidence as a crowd gathered outside.

The U.N. meanwhile said a pumping station in the town of Hassakeh was damaged by shelling, affecting the water supply for 400,000 people, including 82,000 residents of camps for displaced people.

How Steven Spielberg Almost Made E.T. The...