Thousands of angry Indian farmers protesting against new agricultural laws were allowed to enter the national capital late Friday after they clashed with police who had blocked them at the outskirts of the city.

The farmers, who fear the new laws will reduce their earnings and give more power to corporations, will be escorted to a protest site in New Delhi, police in a statement. It was not immediately clear where the protests would be held.

For the last two months, farmer unions unwilling to accept the laws, which were passed in September, have camped on highways in Punjab and Haryana states.

They say the laws could cause the government to stop buying grain at guaranteed prices and result in their being exploited by corporations that would buy their crops at cheap prices.

The government has said the laws are aimed at reforming agriculture by giving farmers the freedom to market their produce and boosting production through private investment.

The farmers began their march to the capital on Thursday to mount pressure on Prime Minister Narendra Modi's government to abolish the laws, but were stopped by large numbers of security personnel in riot gear on the boundary between New Delhi and Haryana state.

Clashes with police outside New Delhi

Heading toward New Delhi on tractors and cars, the farmers were again blocked by police at the capital's fringes. This led to clashes between the farmers and police, who used tear gas, water cannons and baton charges to push them back.

In response, farmers used tractors to clear walls of concrete, shipping containers and parked trucks set up by police on roads leading to the capital.

Some protesters also threw stones at the police and waved the flags of farmer unions. There were no immediate reports of injuries. 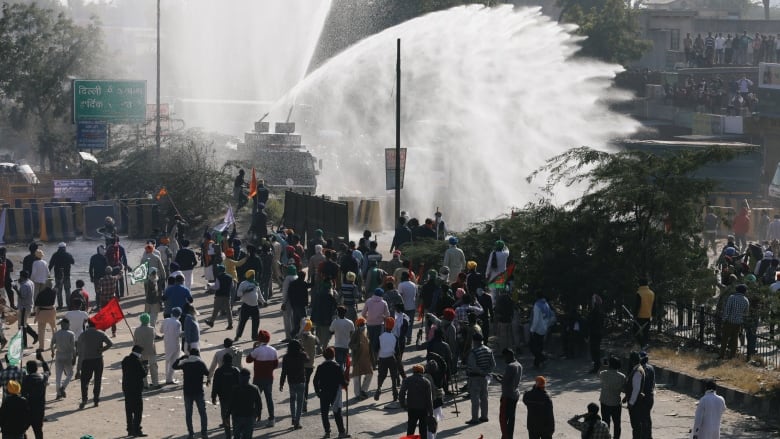 "We are fighting for our rights. We won't rest until we reach the capital and force the government to abolish these black laws," said Majhinder Singh Dhaliwal, a leader.

Earlier, in a bid to stop the protesters from riding commuter trains into the capital, the Delhi Metro suspended some services. Traffic slowed to a crawl as vehicles were checked along state boundaries, leading to huge jams on some highways.

Punjab Chief Minister Amarinder Singh urged the federal government to initiate talks with leaders of the farmers. Many of the protesting farmers are from Punjab, one of the largest agricultural states in India.

"The voice of farmers cannot be muzzled indefinitely," Singh wrote on Twitter. 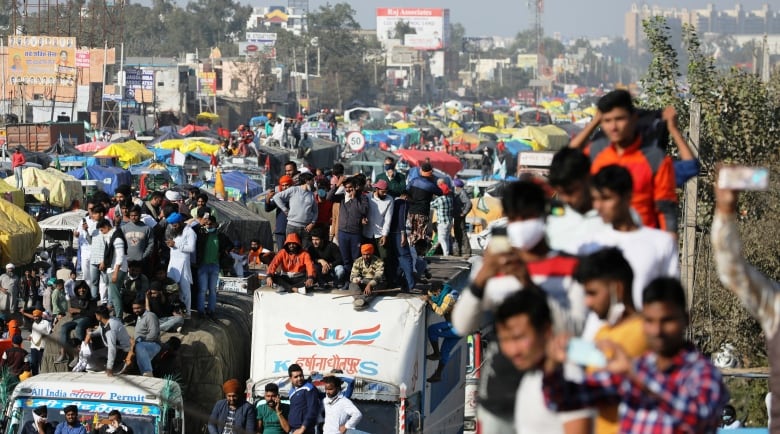 The protesting farmers said the new laws, passed in September, could cause the government to stop buying grain at guaranteed prices and result in their being exploited by corporations. (Anushree Fadnavis/Reuters)

Negotiations between the leaders of farmer unions and the government to defuse the standoff have been unsuccessful. Farmers say they will continue to protest until the government rolls back the laws; opposition parties and some Modi allies have called the laws anti-farmer and pro-corporation.

Farmers have long been seen as integral to India, where agriculture supports more than half of the country's 1.3 billion people. But they have also seen their economic clout diminish over the last three decades. Once accounting for a third of India's gross domestic product, they now produce only 15 per cent of the country's $2.9 trillion US economy.

5 ‘Judas And The Black Messiah’ Cast And Director Say The...