Iranian state TV on Saturday announced the first partial results from the country's parliamentary elections, indicating a strong showing by hardliners in the capital Tehran, although authorities have not released full results or the all-important turnout figure.

Voters had limited options on Friday's ballot, as more than 7,000 potential candidates had been disqualified, most of them reformists and moderates. Among those disqualified were 90 sitting members of Iran's 290-seat parliament who had wanted to run for re-election.

Although the final tally was still not released, a lower-than-usual turnout would signal widespread dissatisfaction with the state of the economy and the ways in which the government has handled a range of crises.

State TV, without providing the number of votes, announced the names of the leading candidates in Tehran's 30 parliamentary seats. All were hardliners led by Mohammad Bagher Qalibaf, who is expected to be the next parliament speaker.

Looming over the election was the threat of the new coronavirus. Many voters headed to the polls with face masks on, and some pharmacies ran out of masks and hand sanitizer amid the election-day rush.

So far, there have been five coronavirus deaths from among the 28 confirmed cases in Iran, including two deaths on election day. Another fatality was reported on Saturday, although the exact time was not specified. 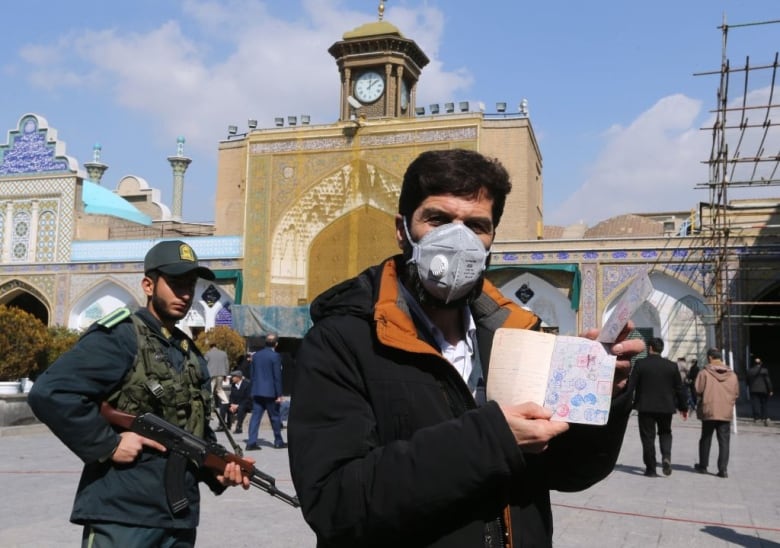 An Iranian voter wears a mask and shows his identification during parliamentary elections at the Shah Abdul Azim shrine on the southern outskirts of Tehran. Iran's health ministry today reported two more deaths among 13 new cases of coronavirus in the Islamic republic, bringing the total number of deaths to four and infections to 18. (Atta Kenare/AFP via Getty Images)

By comparison, the 2016 parliamentary election saw 62 per cent turnout. On Friday, election officials kept the polls open an extra five hours in an effort to boost turnout. Iran's leadership and state media had urged people to show up and vote, with some framing it as a religious duty.

A parliament stacked with hardliners could tilt public policy debates away from engagement with the United States. Tensions between Washington and Tehran have been high since 2018, when President Donald Trump withdrew the U.S. from Iran's nuclear agreement with world powers, and imposed sanctions that have forced Iran's economy into recession. Iranians have seen the price of basic goods skyrocket, inflation and unemployment rise and the local currency plummet.

A more hardline parliament could also favour expanding the budget of the Revolutionary Guard Corps. The Guard's elite Quds Force, responsible for the Islamic Republic's campaigns abroad, was formerly led by Iran's top general, Qassem Soleimani. He was killed by the U.S. airstrike in January.

That strike led to a tense confrontation in which Iranian forces accidentally shot down a Ukrainian passenger plane after it took off from Tehran, killing all 176 people on board. Most of those killed were Iranian.

The shoot-down, and attempts by officials to initially conceal the cause of the crash, sparked public anger and protests in Iran.

A more hardline parliament could lead to increased social and cultural restrictions as well. Pressure from conservatives in recent years has led authorities to ban concerts and block Facebook, Twitter and YouTube.

5 Someone On Twitter Came Up With A Murder Mystery TV Show...