Iran's supreme leader on Sunday backed the government's decision to raise gasoline prices and called angry protesters who have been setting fire to public property over the hike "thugs," signaling a potential crackdown on the demonstrations.

Ayatollah Ali Khamenei's comments came as authorities shut down the internet across Iran to smother the protests in some two dozen cities and towns over the rise of government-set prices by 50 per cent as of Friday. One firm said it was the biggest internet outage ever seen in Iran.

Since the hike, demonstrators have abandoned their cars along major highways and joined mass protests in the capital, Tehran, and elsewhere. Some protests turned violent, with demonstrators setting fires and there was also gunfire.

It remains to be seen how many people have been injured, killed or arrested. Authorities on Saturday said only one person was killed, though other videos from the protests have shown people gravely wounded.

In an address aired by state television Sunday, Khamenei said "some lost their lives and some places were destroyed," without elaborating. He called violent protesters "thugs" who had been pushed into violence by counterrevolutionaries and foreign enemies of Iran. He specifically named those aligned with the family of Iran's late shah, ousted 40 years ago, and an exile group called the Mujahedeen-e-Khalq.

"Setting a bank on fire is not an act done by the people. This is what thugs do," Khamenei said. 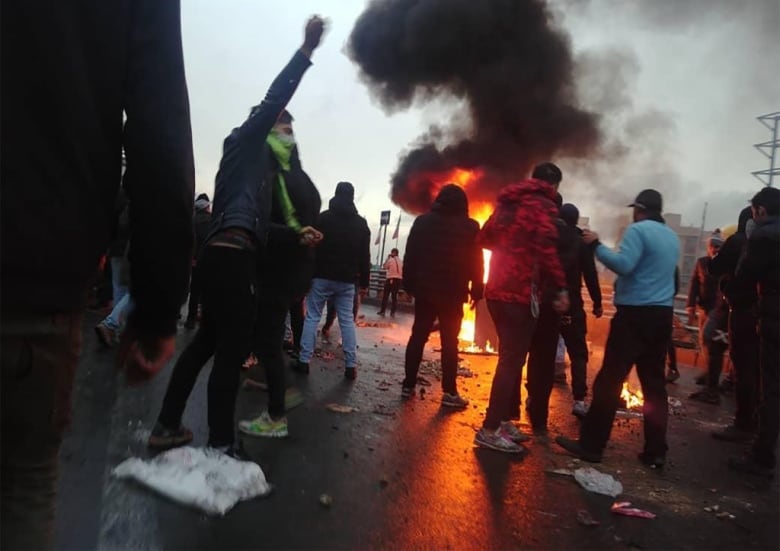 Protesters gather around a fire during a demonstration against an increase in gasoline prices in the capital Tehran on Saturday. (AFP via Getty Images)

However, he made a point to back the decision of Iran's relatively moderate President Hassan Rouhani and others to raise gasoline prices. Gasoline in the country still remains among the cheapest in the world, with the new prices jumping up to a minimum of 15,000 rials per litre of gas — 50 per cent up from the day before.  That's 17 cents (Cdn) more, making a litre cost 60 cents (Cdn)

Khamenei ordered security forces "to implement their tasks" and for Iran's citizens to keep clear of violent demonstrators.

That seemed to indicate a possible crackdown could be looming. Economic protests in late 2017 into 2018 were met by a heavy reaction by the police and the Basij, the all-volunteer force of Iran's paramilitary Revolutionary Guard.

"Such illegal actions would not solve any problem but add insecurity on top of other problems," Khamenei said. "Lack of security is the biggest calamity for any country and society. That is what they are looking for."

Iran's Intelligence Ministry said the "key perpetrators of the past two days' riot have been identified and proper action is ongoing."

The protests have put renewed pressure on Iran's government as it struggles to overcome U.S. sanctions strangling the country's economy since President Donald Trump unilaterally withdrew America from Tehran's nuclear deal with world powers over a year ago.

While representing a political risk for Rouhani ahead of February parliamentary elections, they also show widespread anger among Iran's 80 million people who have seen their savings evaporate amid scarce jobs and the collapse of the national currency, the rial.

Cheap gasoline is practically considered a birthright in Iran, home to the world's fourth-largest crude oil reserves. Rouhani had been pushing for higher prices to offer payments to the poor for months. While the hike was eventually expected, the decision to raise gasoline prices still caught many by surprise and sparked immediate demonstrations overnight.

"The ongoing disruption is the most severe recorded in Iran since President Rouhani came to power, and the most severe disconnection tracked by NetBlocks in any country in terms of its technical complexity and breadth," the group said. The internet firm Oracle called it "the largest internet shutdown ever observed in Iran."

Protester chants seen in online videos mirrored many from the economic protests in late 2017, which resulted in nearly 5,000 reported arrests and at least 25 people killed. Some criticized Iran's spending abroad on Palestinians and others while the country's people remain poor.

The tensions in Iran came as weeks of anti-government protests have engulfed Iraq and Lebanon, two Mideast nations that are home to Iranian proxies and crucial to Tehran's influence abroad.

Iran long has suffered economic problems since its 1979 Islamic Revolution cut off the country's decades-long relationship with the U.S. Iran's eight-year war with Iraq in the 1980s followed, further straining its economy.

The collapse of the nuclear deal has exacerbated those problems. The Iranian rial, which traded at 32,000 to $1 at the time of the accord, fell to 122,600 to $1 in trading on Saturday. Iran has since begun breaking terms of the deal as it tries to force Europe to come up with a way to allow it to sell crude oil abroad despite American sanctions.

The U.S. so far has had a muted response to the protests, with U.S. Secretary of State Mike Pompeo tweeting overnight: "As I said to the people of Iran almost a year and a half ago: The United States is with you."

In Dubai, the new U.S. ambassador to the United Arab Emirates told The Associated Press that America was "not advocating regime change. We are going to let the Iranian people decide for themselves their future."

"They are frustrated. They want freedom," Ambassador John Rakolta said at the Dubai Airshow. "These developments that you see right now are their own people telling them, `We need change and to sit down with the American government."'