Irv Cross, a Pro Bowl cornerback who would become the first Black man to work as a full-time sports analyst on national television, died Sundday near his home in Roseville, MN. He was 81.

His death was announced by both CBS Sports and the Philadelphia Eagles, his former NFL team. A cause was not disclosed.

“Irv was a pioneer who made significant contributions to the storied history and tradition of CBS Sports and, along with Phyllis George and Brent Musburger, set the standard for NFL pregame shows with The NFL Today,” CBS Sports Chairman Sean McManus said in a statement. “He was a true gentleman and a trailblazer in the sports television industry and will be remembered for his accomplishments and the paths he paved for those who followed.”

Said Musburger: “I don’t know that I could give you one person who was nicer than Irv Cross,” said Musburger, who teamed with Cross on The NFL Today, the first live national NFL pregame show. 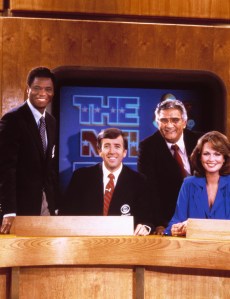 From left: Cross, Musburger, Snyder & George on ‘The NFL Today’ in 1984. Everett Collection

Born and raised in Hammond, IN, Cross played football, basketball and track and field at Hammond High School and was named the Male Athlete of the Year in 1957 by The Times of Northwest Indiana. According to his Eagles bio, when Cross and his friends went to celebrate his win at a local restaurant, they were denied entry because he was Black.

“He didn’t allow incidents like that to deter him or make him bitter,” said Clifton Brown, a sportswriter who worked with Cross on his memoir Bearing the Cross.

At Northwestern University, Cross was captain of the 1960 football team and among the first recruits of coach Ara Parseghian, who would go on to coach Notre Dame for a decade. Cross first met Musburger when both attended Northwestern.

Beginning in 1961, Cross spent six years with the Eagles and then three with the Los Angeles Rams. He went back to Philly in 1969 as a player and defensive backs coach.

already Cross had started broadcast work in Philadelphia radio when he was hired by CBS Sports as a game analyst in 1971. He soon was covering track and field and gymnastics for the weekly show CBS Sports Spectacular, and four years later he was teamed with Musburger, Phyllis George and Jimmy “The Greek” Snyder for CBS’ pregame show. The program was groundbreaking: Cross was the first Black network sports show anchor, and George was the first woman in that role. She died last year at 70.

“He knew that it was important for him to do well,” said biographer Brown on the Eagles’ website. “Irv knew that if the show had failed, that it might hurt down the road for other Black sportscasters to get a similar opportunity. He was carrying that weight and he did it so superbly…We’re just so used to seeing former athletes on television. But all of them, particularly those who are African-American, whether they know it or not, I believe they owe a debt to Irv Cross.”

Cross was on The NFL Today for 14 years and spent 23 years total with CBS Sports. In 2009, he became the first Black recipient of the Pete Rozelle Award, enshrined in the Pro Football Hall of Fame.

The Eagles requested that in lieu of flowers, donations may be sent to the Alzheimer’s Research and Prevention Foundation or the Concussion Legacy Foundation.

2 Timberwolves Game Against Brooklyn Nets Postponed Due to...

7 Microsoft shopping for speech tech, in talks to buy...

8 Wait! Read This Before You Sell Your Home for Cash to a...

10 After Getting Fully Ripped, Beauty And The Beast Star...