EXCLUSIVE: The Way Back and The Morning Show actress Janina Gavankar is writing and starring in a female-driven monster movie based on the ancient Hindu myth of the Rakshasa which 108 Media will finance and produce.
Gavankar co-wrote the feature with her creative partner Russo Schelling, and the movie will be shot in India. Abhi Rastogi, Matthew Francis Wilson, and Justin Deimen are also aboard as EPs.

The myth of Rakshasa is a bloodthirsty demon that makes mankind its prey, after being banished from the realm of the gods and forced to live among men. The project follows Gavankar and Schelling’s co-directed short film Stucco, which won the Special Jury Recognition for Creature Design prize at SXSW 2020 and has already been seen over 14M times online since its release in March. Stucco also opened the Oscar-qualifying HollyShorts Film Festival. 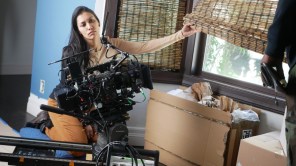 Janina Gavankar directing on the set of ‘Stucco’ Gustavo Astudillo

In Invasion, starring Riz Ahmed and Octavia Spencer, two young brothers go on the run with their father, a decorated Marine, who is on a rescue mission to save his boys from an unhuman threat. As their journey takes them in increasingly dangerous and unexpected directions, the boys will need to confront hard truths and leave their childhoods behind. Gavankar will play the role of Piya, the ex-wife to Riz Ahmed’s character.

On TV, Gavankar has starred in The L Word, Sleepy Hollow, True Blood, They Mysteries of Laura and most recently as Alison Namazi on AppleTV+’s eight-time Emmy nominated The Morning Show and Netflix’s Space Force.

On the feature side, Gavankar’s credits include the Sundance Film Festival premiere Blindspotting, Warner Bros.’ The Way Back opposite Ben Affleck, and Think Like a Man Too.

She is repped by APA, Thruline Entertainment and Felker Toczek Suddleson Abramson.

Melissa McCarthy Being Sued For $10 Million...

Pete Hammond: Here’s What Should Win Emmys On...