As the world’s athletes gather in Japan for the Summer Olympics the country is experiencing a fourth wave of Covid-19 infections. Country-wide, case numbers have risen 20% in the past week, with 4,204 new infections reported on Friday. While the 7-day average of infections per 100,000 is still relatively low at 3.3, so are the number of Delta variant cases which, while that’s good news right now, does not bode well for the country with rising numbers if that more-transmissive inevitably takes hold.

Only about 23% of Japan’s population has been fully inoculated against Covid. In the U.S., 49% of Americans are fully vaccinated. The island nation is more wary of vaccines than many countries, especially those made overseas. Its vaccine rollout began only recently, in mid-February, because officials there ordered domestic clinical trials in addition to Pfizer’s testing in other countries. That took months. And in those months, the country saw a surge, peaking at over 8,000 daily new cases in early January.

Tokyo Olympics Full TV & Streaming Schedule: How To Watch Everything From Gymnastics To Track & Field, Basketball And Soccer On NBC, Peacock & More - Updated

The graph charting the beginning of this new surge is similar to those of the previous three, albeit steeper. See chart below. 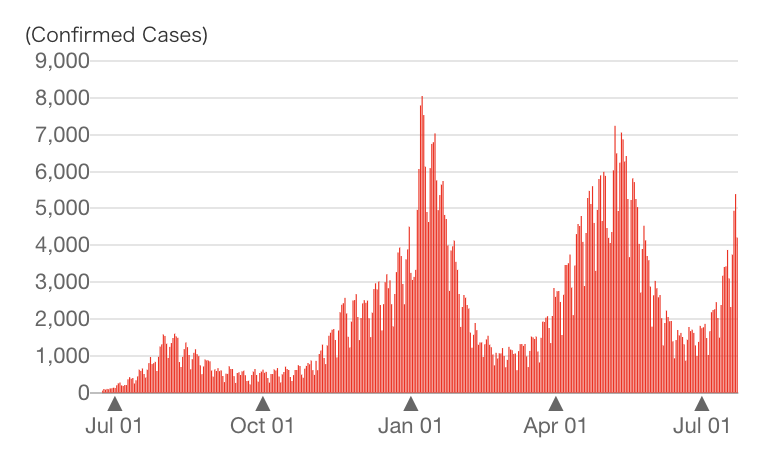 Trend in the number of newly confirmed cases in Japan Japan Ministry of Heath, Labour and Welfare

In Tokyo, cases are also rising. The 7-day average daily test positivity rate jumped 42% between July 14 and July 20, according to figures from the Tokyo Metropolitan Government. Over that same period, Covid-related hospitalizations rose 18%.

“The infection may spread more rapidly and the number of confirmed cases may far exceed that in the third wave within 2 weeks if the Delta variant and others become much more dominant,” reads a statement from Tokyo authorities. It continues, “The rapid increase in confirmed cases makes it highly possible that the healthcare system would face a crisis.”

According to AP, about 100 of the 613 American athletes in Tokyo are unvaccinated. The IOC has reported 13 athletes in Japan have tested positive. Among them are two Americans. The Tokyo Games end on August 8. A cresting fourth wave in two weeks would put those American athletes — and support staff — in the middle of it.