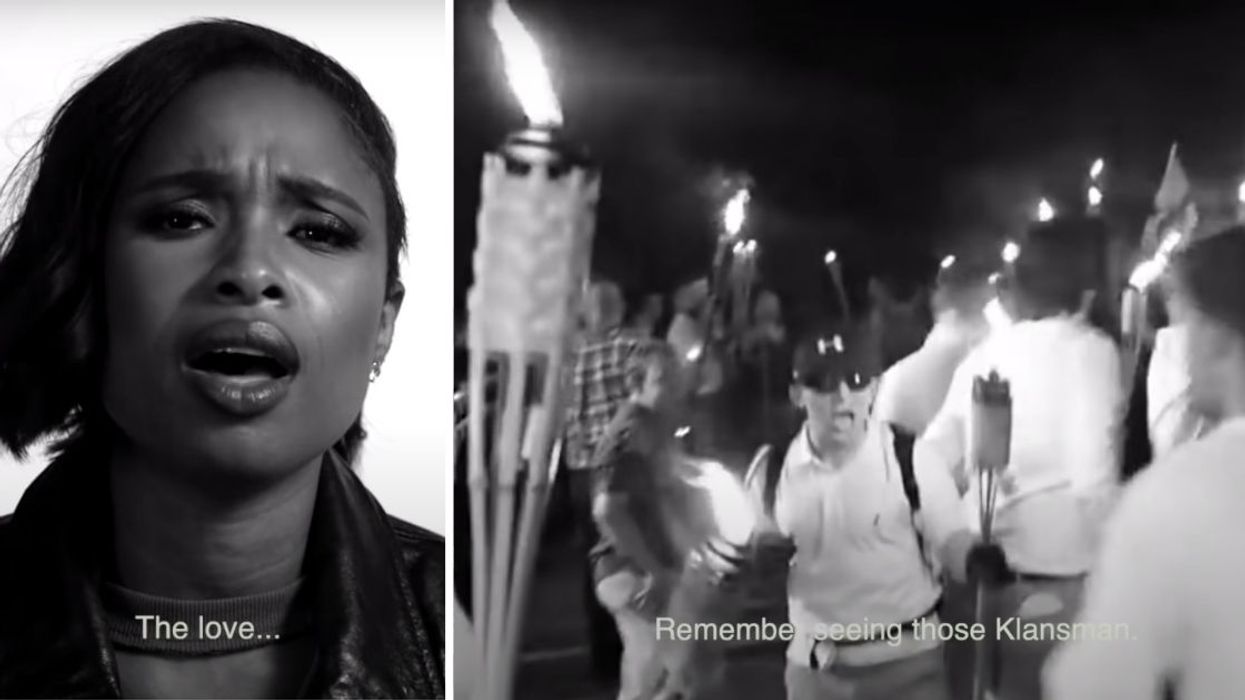 "I cried, and I'm not even American!" That's one of the thousands of comments posted on the newest Black Eyed Peas video, which has been viewed more than 28 million times in one week on YouTube. "THE LOVE" with Jennifer Hudson and Black Eyed Peas was produced by will.i.am and it might be the most powerful campaign-ad-that's-not-actually-a-campaign-ad that's ever been made.

The video is a remake of the Black Eyed Peas' popular song "Where is the Love," but with revised lyrics and a powerful opening of Jennifer Hudson singing along with Joe Biden's DNC speech. As Biden recalls the events of Charlottesville, the video shows clips of news coverage from three years ago, followed by the prayerful chorus, "Father, father, father help us. Send some guidance from above, because people got me, got me, questioning, 'Where is the love?'" Soon will.i.am comes in rapping about the hatred in the world today, we see more of Biden's words backed up by the music, and the effect of the whole thing is just deeply moving.


Some people in the comments refer to the video as an ad, but neither Joe Biden's name nor his campaign are on it anywhere. He's surely pleased with the video, but it doesn't appear to be something that came from his campaign. The end screen of the video simply says "VOTE LOVE."

If not an official ad, it's a pretty darn clear endorsement. The Black Eyed Peas left a message in the comments on YouTube about why they made the video and what they hope people will take from the video:

"On November 3rd, the United States will decide as a nation which path it would like to walk, a path which will affect generations to come.

We want this video to be a reminder that in these unprecedented times, we must stand together.

We must choose the path we would like to walk for our future, and whether that path is one of inequality and hate--or equality, unity, and love.

We would like to formally invite you to #VOTELOVE this November 3rd.

Thank you for watching."

Comments have poured in from Americans eager to end the chaos of the past four years, as well as commenters from around the world, from Germany to Thailand to Peru, and more. And people reacted with strong emotion and inspired encouragement, with comments like:

"This gave me goose bumps. So powerful."

"Try to watch this without a tear in your eye. Our country's core in on the line. VOTE"

"See, that's the thing about America: we really are a great nation when we simply admit our mistakes, and do better. We consistently forget our history and it's always to our peril. My hope is that this time is different."

"Let's bring some love, unity, character, democracy and justice. They're all on the ballot."

"Waoooo, this is the most powerful Ad I've ever watched , common AMERICA , wake up , PLEASE choose Unity, compassion and character."

"That is the most beautiful & powerful political ad/endorsement I've ever seen. That should be on every TV every commercial break now through the election."

"Beautiful song, beautiful sentiment, very powerful political and social statement. I'm from UK but this message is relevant throughout the world. Thank you."

"I have watched this dozens of times over over the past few days & it still brings tears to my eyes."

"Thank you for this. It is heartbreaking but beautiful, and makes me hopeful for a better tomorrow. Whether you are right or left, hate has no place in our society. Respect and love for each other, regardless of our differences in theology, religion, heritage, identity or appearance, is the only answer."

It's a universal message that resonates with people of goodwill everywhere. Here's to voting love, and here's to a future where we don't have to keep bringing back this song with each generation.

3 Sophie Turner urges 'empathy' in a sweatshirt while on a...

6 ‘Utopia’ Canceled By Amazon After One Season

8 William Roache, 88, reveals he thought about quitting his...