Seattle-based JetPlay has launched the open beta of Ludo, following a successful closed beta with participation from independent studios around the world. It will be a big test about whether automation can be useful in the domain of creativity, where humans have dominated so far.

Ludo is a game ideation platform that helps teams come up with ideas for games as well as images that can help them generate concept art. To me, this could go either way depending on the quality of the results. If it doesn’t work well, it could be a terrible idea, spitting out clones of popular games or otherwise leading creators astray. If it works well, however, it could accelerate creative moments and put your imagination on turbocharge, giving you a place to start your creative work.

Ludo is Latin for “I Play,” and it uses machine learning and natural language processing to develop game concepts 24 hours a day. The platform is constantly learning and evolving. Ludo is built on a database of close to a million games and is agile and supremely intelligent, said Tom Pigott, CEO of JetPlay in an email to GamesBeat. 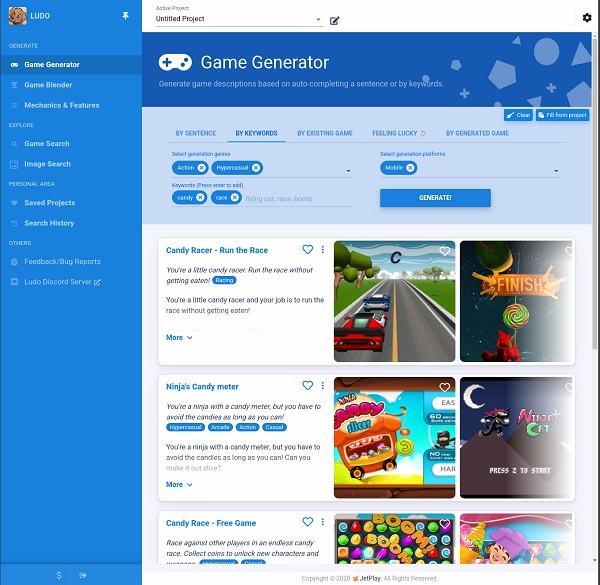 Above: Ludo can also recall all the game art in a genre and inspire new art.

“The inspiration behind this company, I guess you could say, was that necessity is the mother of invention,” Pigott said. “Our origins are as a hypercasual mobile gaming studio, and we had the same challenge as other studios of having to develop a constant stream of new game concepts on a monthly basis, knowing that the vast majority of the prototypes wouldn’t make it past the first CTR/CPI/D1 tests. I wondered if it might be possible to leverage some of the recent advances in AI and natural language processing to create a tool that generates an endless amount of game concepts, based on a well-trained database of games.” 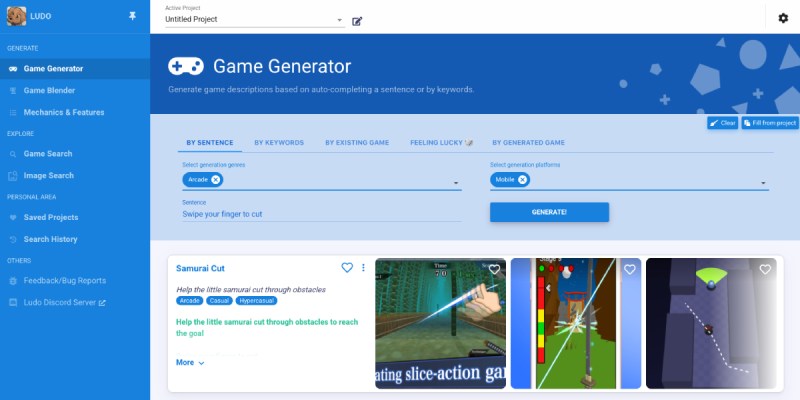 Above: Ludo can automatically generate games based on search terms.

Ludo uses new AI models such as Open AI’s GPT-2 to help game designers. Behind the scenes, Ludo relies on natural language processing (NLP) Transformer models to understand existing games and generate new games. Ludo’s models are trained on close to a million games found in different sources, of all possible genres, and a wide variety of platforms.

This allows Ludo models to fundamentally understand what each game is about, how different game elements can be used to build a game, and produce new game descriptions leveraging those associations. The game generations produced by Ludo tend to have a high degree of creativity and surprising combinations of game elements, while still being perfectly readable and understandable. This makes Ludo a brainstorming partner when trying to come up with a new game concept. And since random sampling is involved in the generation processes, the content generated by Ludo will always be different and is virtually unlimited, even if the users give Ludo the same inputs.

Ludo combines a number of different NLP models to provide good results in game and art generation, including:

When asked to find a new game idea, based on intuitive keyword searches, Ludo returns almost immediately with multiple written game concepts, artwork, and images that developers can rapidly work on to take the next stage (concept presentation, minimum viable product (MVP), or accelerated soft launch). 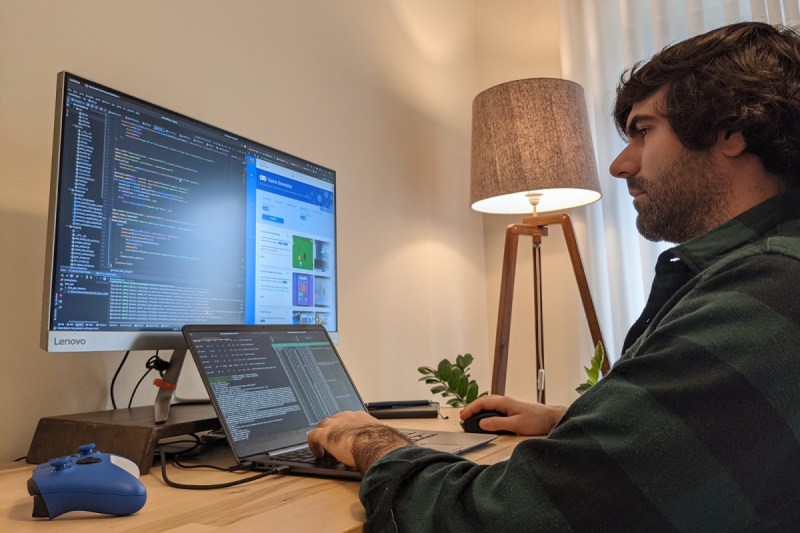 JetPlay is also working on making the computer vision part of the AI more sophisticated so that it can help with art concepts. As for images, Ludo has an image database with close to two million images on it. You can search for almost anything with a label: racecars, zombies, battle axes, clowns, etc. It will show all versions in triple-A format, mid-core, casual, and hypercasual.

“It is a tremendous resource for 2D/3D artists for inspiration and seeing what has already been done,” Pigott said. “The challenge for all computer vision currently is the correct labeling of the images and classification. It is super difficult at present for a cartoon or graphic image of a duck, horse, and pig all in one picture, for the AI accurately to just identify the duck. It all gets blended together now, but the field is improving.”

Pigott noted that Imagenet, Fei Fei Li at Stanford University in 2012, now has 14 million images and is the industry standard for computer vision case studies. But gaming images are often not just photos, as they mostly animated or fantastical, so they are hard to classify.

The overall idea underscores the relentless pressure in gaming to come up with the next big idea for a blockbuster game. Ludo arms developers with unique game concepts within minutes of their request being processed. It could be especially important for categories such as hypercasual mobile games, where publishers and developers must deliver hit new games at a rapid pace.

“Creativity is the new currency in the games industry,” said Pigott. “The next hit game could be worth millions and you never know where it will spring up from. With Ludo anyone can come up with a great new game idea without having to waste hours on the process and then invest even more time in researching what is already out there and how successful any similar games have been. Ludo brings the playfulness back into the game creation process, increases the probability of coming up with a great new game, and saves time and money.”

Ludo has been created by a small outstanding global team of AI researchers. Pigott came up with the original idea, and now the team has seven people. The company is self-funded.

“We’ve been extremely pleased by the feedback and the usage of our platform by the game makers that were part of the closed beta,” said Pigott. “AI, when used as part of the creative process, delivers great results. It is easy to use, working intuitively with keyword searches, and those involved in our closed beta have already proved that amazing things can be done, and all without detracting from their development or marketing time. Very soon Ludo will become an integral part of every studio’s games ideation process.”

IMVU relaunches as Together Labs, raises $35...

4 People Share What They Found Thrown Away And The Phrase...