Joe Biden, the presumptive Democratic presidential nominee, had a testy exchange with a prominent black radio personality on Friday over Biden's support among black voters and his choosing of a running mate.

Charlamagne Tha God pressed Biden on reports that he is considering Minnesota Sen. Amy Klobuchar, who is white, to be his choice for vice-president and told him black voters saved his "political life in the primaries" and "have things they want" from him.

A Biden aide then sought to end the interview on The Breakast Club, prompting the host to say, "You can't do that to black media."

Biden responded, "I do that to black media and white media," and said his wife needed to use the television studio.

He then added: "If you've got a problem figuring out whether you're for me or for Trump, then you ain't black."

The host countered that conversations about Biden's running mate aren't about President Donald Trump, whose approval ratings with blacks have consistently been extremely low.

Biden has emphasized his relationship with black voters, noting throughout the campaign his dependence on black voters in his Delaware Senate races and his partnership as President Barack Obama's top lieutenant.

Black voters helped resurrect Biden's campaign in this year's primaries with a second place finish in the Nevada caucuses and a resounding win in the South Carolina primary after he'd started with embarrassing finishes in overwhelmingly white Iowa and New Hampshire. 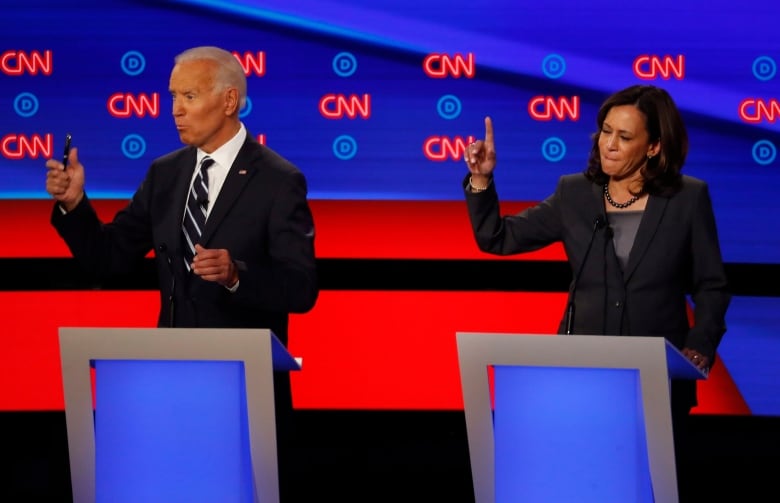 Sen. Kamala Harris sparred with Biden on the debate stage, but she has since endorsed his presidential bid. Biden has pledged to pick a female running mate, and many Democratic voters would like to see a woman of colour get the nod. (Paul Sancya/The Associated Press)

Symone Sanders, a senior adviser to Biden, said his parting comment in Friday's interview was "made in jest."

"Let's be clear about what the VP was saying," Sanders tweeted. "He was making the distinction that he would put his record with the African American community up against Trump's any day. Period."

There is a risk, however, of black voters, especially those who are younger, staying home in November, which could complicate Biden's path to victory in a tight election. The Breakfast Club is a particularly notable venue for Biden's comments because the program is popular among younger black people.

Biden's selection of a running mate could help motivate voters. He's begun vetting contenders, a process he's said will likely last through July. Several black women are reportedly among those under consideration.

Republican Sen. Tim Scott of South Carolina, who is black, characterized the comments on social media as "the most arrogant and condescending thing" he's heard in a very long time.

"I am offended, but not surprised," said Scott.

Joe Biden’s comments are the most arrogant and condescending thing I’ve heard in a very long time. I am offended, but not surprised. pic.twitter.com/aXiVF6oAwc—@SenatorTimScott

Biden has made similarly problematic comments before.

He was picked as vice-president running mate in 2008 despite describing Obama the year before as "the first mainstream African American who is articulate and bright and clean and a nice-looking guy."

Early in this season's presidential campaign, when talking about equality of opportunity for children, he remarked: "Poor kids are just as bright and just as talented as white kids."

Biden quickly elaborated, indicating he was commenting on how class and wealth too often determine the opportunities afforded young people. 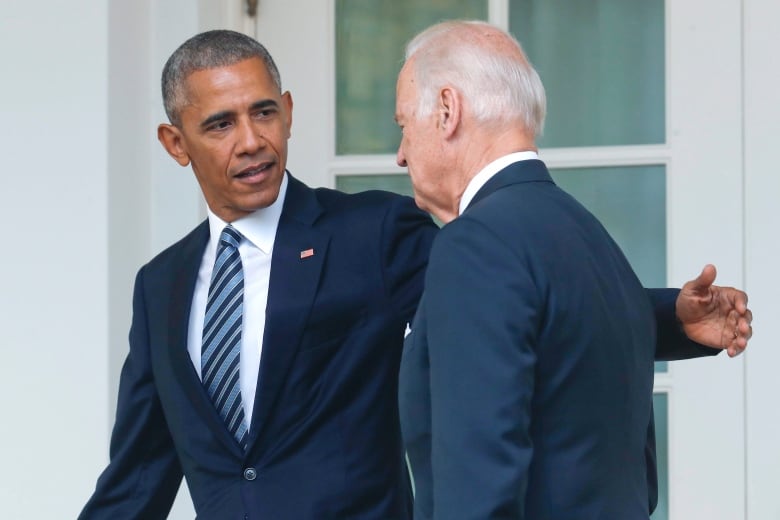 President Barack Obama and Joe Biden walk back to the Oval Office in Washington in a 2016 file photo. Obama brushed off a Biden verbal gaffe in 2007 to select him as his running mate. (Pablo Martinez Monsivais/The Associated Press)

"He truly believes that he, a 77-year-old white man, should dictate how black people should behave," said Trump campaign spokesperson Katrina Pierson, one of the few black advisers to Trump both in the campaign or at the White House.

The president has a history of incendiary rhetoric related to race, however.

When he launched his presidential campaign in 2015, Trump called many Mexican immigrants "rapists." In 2017, he said there were good people on "both sides" of the clash in Charlottesville, Va., between white supremacists and anti-racist demonstrators that left one counter-protester dead.

Last year, Trump blasted four Democratic congresswomen of colour, saying they hate America and should "go back" to where they come from, even though all are U.S. citizens and three were born in the U.S.

How publishing indie games is like building a band

Telluride Film Festival Announces It Will Go On With The Show; Plans Continue To Hold Important Oscar-Precursor Event On Schedule

3 Commercial Shoots Start To Pick Up As Restrictions On...

9 Planet Of The Apes And 8 Other Remakes That Should Not...